Please refer to our Privacy Policy for important information on the use of cookies. By continuing to use this website, you agree to this.
Home Latest Controversial Swedish Campaign Wins PR Grand Prix At Cannes 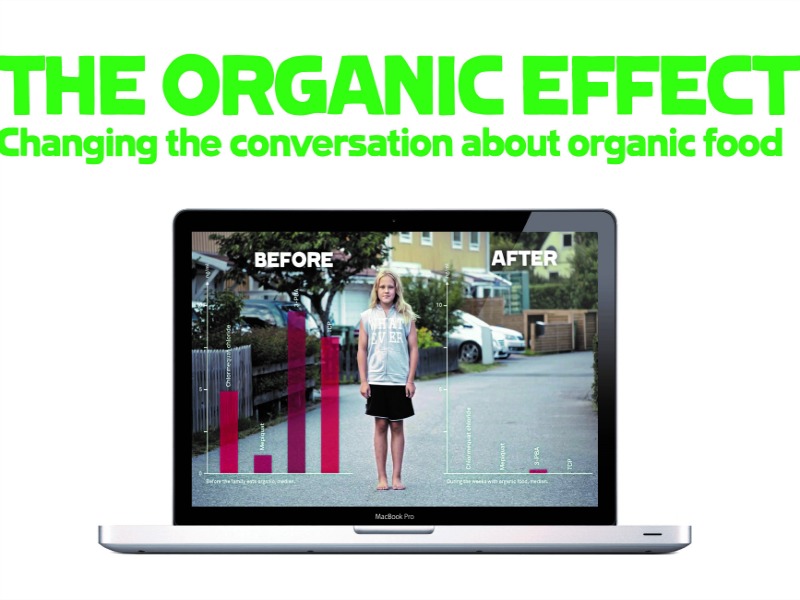 “The Organic Effect” a campaign for Co-op in Sweden entered by Stockholm ad agency Forsman & Bodenfors has attracted lawsuits accusing the company of false and misleading advertising.

CANNES—The Public Relations Grand Prix at Cannes has been presented to “The Organic Effect” a campaign for Co-op in Sweden, entered by Swedish ad agency Forsman & Bodenfors—a campaign that has attracted lawsuits (since thrown out by Swedish courts) accusing the company of false and misleading advertising.

The viral video campaign featured a Swedish family that switched to an organic, pesticide-free diet for two weeks, with urine samples taken before and after—showing a reduction of certain pesticide traces in their bodies.

But the campaign has been criticized because the company did not test for residues from the pesticides used in organic agriculture (in Sweden, those include lime sulfur, pyrethrins, iron phosphate, and more), just for those used in non-organic products.

Writing for Forbes, science communicator and bad science debunker Kavin Senapathy wrote: “Most people don’t realize that organic agriculture uses pesticides too, albeit different ones. And the experiment didn’t test for pesticides used in organic agriculture. This is like assigning a group of people to drink screwdrivers (that’s OJ and vodka for our teetotalers), then having them swap the screwdrivers for rum and cola, and concluding that rum and cola drinks lead to zero vodka levels in the body.”

The campaign has been criticized for a number of other misleading tactics, and in particular for its failure to discuss the dosage found in relationship to harm to human health. “The dosages detected are only a few percentage of the acceptable daily intake, which is the amount you can eat every day for your entire life without any particular risk,” according to Emil Karlsson of the Debunking Denialism blog.

PR jury chairman John Clinton, chair of Edelman Canada, said the campaign won “for the combination of the freshness of the idea, the difficulty of discussing the topic, and the results it achieved in the marketplace.” Cannes rules do not allow judges to conduct their own research into the entries, relying entirely on the submission, and Clinton said the jury was unaware of any controversy.


Meanwhile, just two public relations agencies—Sweden’s Prime (part of Weber Shandwick) and leading Brazilian independent FSB—were among the Gold PR Lions winners at Cannes tonight, marking the worst performance for PR agencies as 'primary entrants' since the first year the PR category was introduced. That tally swells once 'contributing agencies' are accounted for — with many PR firms involved as supporting players on Lions-winning campaigns.

FSB won for “Nivea Doll,” which featured a doll designed to teach kids about the importance of sun block that became a phenomenon in Brazil. Prime won for “The House of Clicks,” which used data analysis from a real-estate website Hemnet to create a visual representation of Swedes’ ideal home.

Prime also picked up the only one of 28 Silver Lions that was presented to a PR agency, for its “Don’t Drink and Dive” campaign for Swedish insurance company Trygg-Hansa.

Another Gold winner, "The Swedish Number" was credited to INGO Stockholm but should perhaps have also included Cohn & Wolfe, which handled PR duties in all markets outside the US (where PR was handled by Grey).

But the evening was dominated once again by PR work from ad agencies, with Gold Lions going to the likes of J Walter Thompson, McCann, DDB, TBWA, Grey and Leo Burnett. Under Cannes rules, judges to do not see the names of the submitting agencies.
Creativity Partner
Hill+Knowlton Strategies