Please refer to our Privacy Policy for important information on the use of cookies. By continuing to use this website, you agree to this.
Home Latest Covid-19 Comms: US Government Worst, New Zealand & Germany Best Say PR Pros

The US government has been the least impressive in terms of its response to the pandemic, while the governments of New Zealand and Germany impressed the most.

NEW YORK—The United States federal government has been the least impressive in terms of its response to the Covid-19 pandemic, according to public relations professionals from around the world, while the governments of New Zealand and Germany have impressed the most.

Those findings come from the second wave of our PRovoke Media Covid-19 PR Industry Survey, conducted in partnership with ICCO, APACD and research platform Stickybeak. The 289 survey respondents were evenly distributed by national origin: 31% from North America; 24% from Asia; 20% from Europe; 12.5% from the UK; with smaller numbers from Australasia, Latin America and the Middle East and Africa.

When we asked PR professionals from around the world which government’s communications efforts had least impressed them, the US was the clear number one, garnering more than 60% of the votes. That proportion grew to more than 80% when limited to respondents from North America alone.

The second least impressive response came from the UK (12%), with China (7%) in third, and Brazil (2%) in fourth. No other country received more than four mentions from the 269 people who provided responses to the question.

The industry’s judgment on the most impressive response to the crisis was much less clear-cut. New Zealand received the most votes (slightly more than 20% of all votes), just ahead of Germany (16.5%). Singapore (9%) was the only other country to receive more votes than “None,” which was the response of 5% of respondents.

But there were multiple votes for South Korea (5%), New York state (4%), Taiwan (3.5%), India and Canada (3%). The US federal government did receive 2.8% of the votes for the most impressive response. No other country received more than seven votes and more than 50 countries received at least one vote.

But overall, governments, government departments and spokespeople have been only the second most credible source of information (21.7% of responses ranked them in the top three), behind independent scientific commentary (28.3%) and just ahead of "mainstream media in your own country" (20.8%)—although with international media receiving 15.4% of respondents’ votes, the mainstream media are scoring high marks overall. 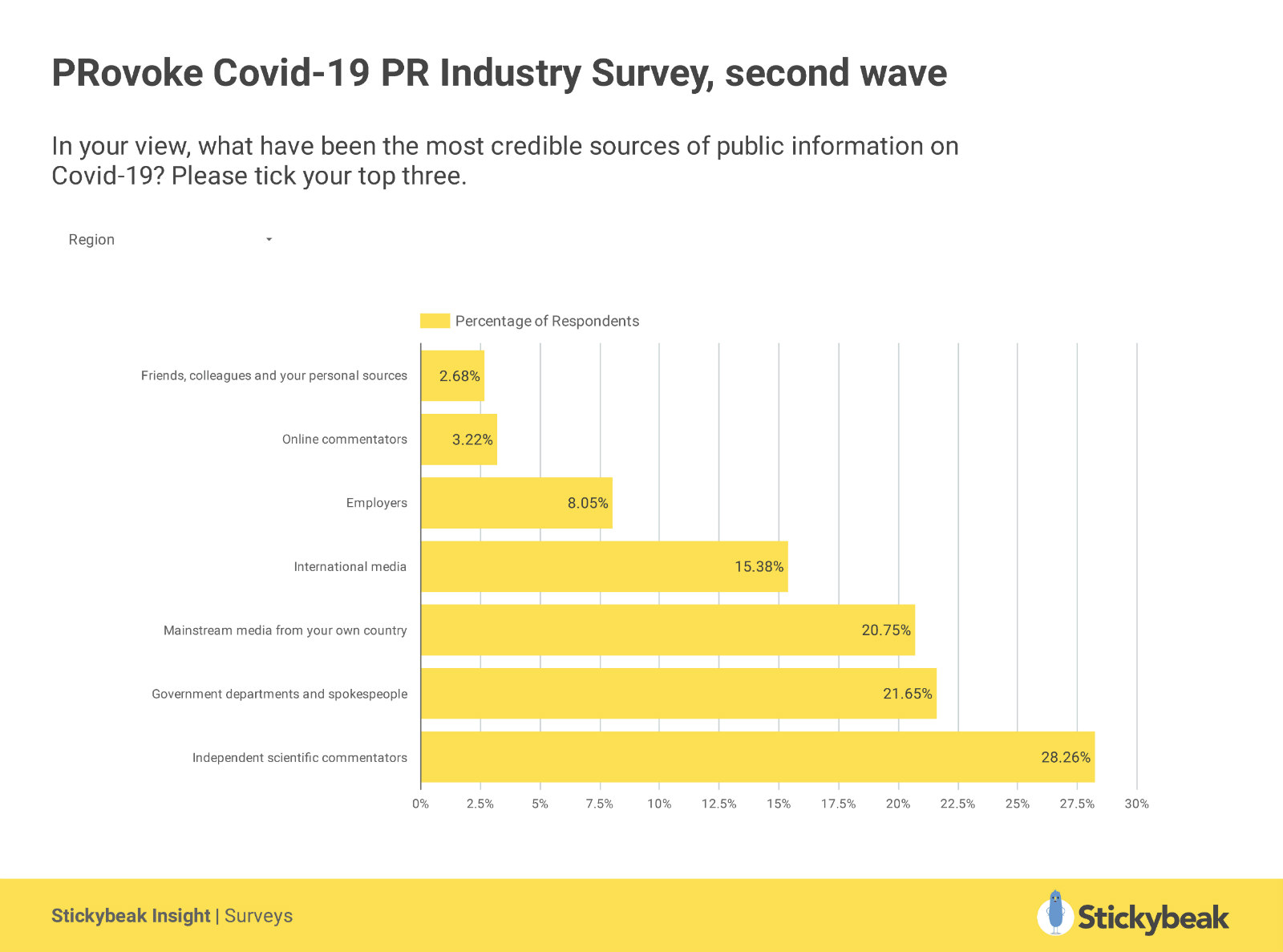 Other, less credible sources of information for PR people include employers (7.9%), online commentators (3.2%) and friends, colleagues and personal sources (2.5%).

In terms of what defines successful communications around the pandemic, the most important factor according to public relations agency professionals, is timeliness of communication (24.3%), followed by communicating and updating policies (18.5%) and tone and language of messaging (18.2%).

Also important is correcting misinformation (16.3%) and being prepared for the unexpected (15.8%).

In-house respondents also listed timeliness of communication first (27%), followed by tone and language (18.7%) and being prepared for the unexpected (16.75%).

Those responses are largely the same as our first round of research, where timeliness took top spot, ahead of being prepared for the unexpected, communicating and updating policies, and tone and language of messaging.