Please refer to our Privacy Policy for important information on the use of cookies. By continuing to use this website, you agree to this.
Home Latest Edelman Wins Global PR Agency Of The Year Honors 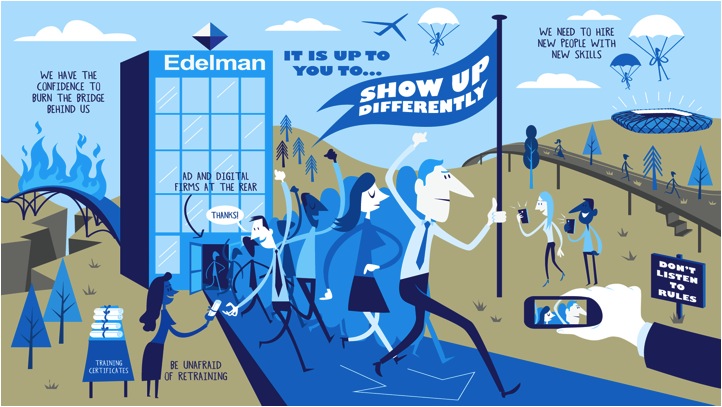 The Holmes Report names its 2013 Global Agency of the Year winners.

MIAMI—The Holmes Report has named Edelman as its Global Agency of the Year for 2013 and Interpublic—the parent of Weber Shandwick and GolinHarris—as its first ever Holding Company of the Year. The awards will be presented at the Global SABRE Awards dinner, part of the Global Public Relations Summit in Miami from November 11-14.

There will also be recognition in various sectors and practice areas for the UK’s Unity in the consumer category; MSLGroup in the corporate category; Social&Ogilvy in the digital category; Spanish firm Llorente & Cuenca in the financial category; Weber Shandwick in the healthcare category; the UK’s Brands2Life in the technology category; and Chinese giant Blue Focus in the emerging markets category.

In selecting a Global Agency of the Year, we look for both strong overall performance—with growth of 12 percent during its fiscal year, Edelman clearly outperformed its peers—and great consistency across various regions. In Edelman’s case, it is difficult to pinpoint a weakness: in recent years, it has been our Agency of the Year in North America, EMEA and Asia-Pacific, and its strength in the developed world is matched by its growth in emerging markets: it was our Middle East Consultancy of the Year award and is growing fast in Latin America.

We also look for a balanced portfolio of business, and Edelman has that. Its consumer, healthcare and technology practices are formidable in every region; its corporate business—including crisis management and increasingly strong public affairs capabilities—has grown in recent years to match the best in the industry; and it is among the pioneers in digital and social media and content creation, developing a PR-centric model that embraces paid, earned, shared and owned media.
Finally, its thought leadership activity continues to set the standard, with its decade-long commitment to the Trust Barometer research supplemented by a host of smaller worthwhile studies that add to our understanding of the profession.

With virtually all of the top-tier public relations firms now operating in a holding company environment (even independent Edelman, which shares a parent—Daniel J Edelman Group—with Zeno), it is clear that those companies can be either a source of competitive advantage or an obstacle to growth. In recent years, Interpublic—parent of Weber Shandwick and GolinHarris—has transformed from the latter into the former, with the elevation of Harris Diamond to the CEO role at McCann Worldgroup only one indication that the group takes PR seriously.
Its “constituency management group,” which includes its PR operations, saw revenues increase by 11 percent last year, considerably stronger performance than either its two closest rivals. Indeed, both of its global brands have been outperforming their peers, with Weber Shandwick continuing to stand out as Edelman’s most notable rival for the number one spot and Golin earning Agency of the Year honors in the US and the UK last year. Its niche firms have also been impressive: consumer giant DeVries has been expanding into international markets, while PMK*BNC and Rogers & Cowan are the two biggest names in entertainment PR.

[email protected]'s growth into one of the world's premier social media marketing consultancies has not been an overnight process. Over the past seven years, the agency has steadily built a cohesive global network of social media experts within Ogilvy PR, culminating in the 2012 launch of [email protected] Since then, two things have helped [email protected] gain an edge over its rivals. The first is the unit's cross-disciplinary status, which sees it work across Ogilvy's existing units in public relations, digital, and advertising — a must in an era of rapid convergence. The second is its genuine global scale, exemplified by strong regional offerings in North America, EMEA and Asia-Pacific. Under the leadership of John Bell, [email protected] has developed an impressive team that now numbers more than 550 employees across 35 markets, driving a broad array of thought leadership initiatives and working for such clients as Unilever, BP, Ford and Nestle. All of which has added up to topline growth of more than 35 percent and a slew of award-winning campaigns.

The genius of Unity, one of the UK’s brightest new consumer public relations specialists, has been its ability to straddle the worlds of business and popular culture—keeping one foot in the boardroom and one in the street, as cofounder Gerry Hopkinson puts it—at a time when smart companies increasingly recognize the need to tap into current cultural trends if they are to engage in a meaningful way with their consumers. It’s an approach that helped the firm conceive and execute one of the most innovative and eye-catching campaigns of the year for retail client Marks & Spencer, which partnered with charity Oxfam—Unity does great work for and has maintained close relationships with a number of leading nonprofits—to capitalize on the “shwopping” trend, reselling, reusing or recycling old clothes to aid people living in poverty. And over the past 12 months it has helped the firm—which has attracted a lot of attention and industry awards for its low-budget campaigns on behalf of smaller clients—attract an increasingly impressive roster of big brand clients, with the likes of M&S, Ben & Jerry’s, Hyundai, Baileys, Lucozade, Aquafresh, and Ribena, now coexisting comfortably alongside the firm’s cause clients. That the firm stole a march on its larger rivals to top the recent Global Creative Index should elicit little surprise.

The old Manning Selvage & Lee was best known for its work in consumer PR and the healthcare space. The new MSLGroup, however, has quietly pulled together one of the most formidable corporate capabilities in the world, with Kekst and Company in the US, Publicis Consultants in Paris, JKL in the Nordic region, Eastwei in China, and Capital MSL in the UK and the Middle East all providing an impressive range of financial communications and corporate and public affairs counsel, even before the 2012 acquisition of Germany’s CNC, which brought one of EMEA’s best boutique firms under the MSL umbrella. Highlights have included a 15-market thought leadership and public affairs campaign for the World Gold Council; Kekst’s work on the American Airlines bankruptcy and the sale of the LA Dodgers; reputation and issues management for Google in Germany and Italy; and CNC’s work on two Chinese company listings and Lufthansa’s sale of BMI to British Airways.

Two-time Iberian Consultancy of the Year Llorente & Cuenca is not only one of the biggest and best independent public relations firms in Spain (it was selected by 10,000 communication, marketing and advertising professionals as the Best Communication Consultancy of the Decade in a poll for El Publicista); it’s also one of a handful of firms that provides comprehensive coverage of the Latin world, with offices in Madrid and Barcelona; a significant presence in Portugal;  and a network of operations in key cities throughout Latin America that have helped it withstand the downturn in its domestic market. Key clients include Repsol, Gas Natural Fenosa, Inditex, Sonae Sierra, CaixaBank, Burger King, Panasonic and Embratur (the Brazilian tourism body). New work came from Imperial Tobacco, Mastercard, Cruise Lines International Association, Nissan, and more, and the firm’s work included the “Leading the Change” employee communications initiative for Gonvarri Steel Industries/Gestamp Renewables, and the reorganization at CaixaBank, including both internal and external stakeholders. The firm also handled issues management work for Singapore Airlines after codeshare partner Spanair ceased trading

In the 21st century, it is no longer enough for a healthcare public relations firm to have a large roster of big pharma clients, and no firm has done a better job of diversifying its portfolio than Weber Shandwick. Under the leadership of Laura Schoen, its global health practice has a strong portfolio of clients in the biotechnology, pharmaceutical, consumer health, medical devices, health IT, insurance, professional associations, health systems and hospitals, with major new assignments including the high-profile Health & Human Services Department “Obamacare’ brief, Center for Medicare & Medicaid Services, the American Academy of Pediatric Dentistry, and Brigham & Women’s Hospital, and growth from existing clients such as Novartis and the Bill & Melinda Gates Foundation. Perhaps most impressive, however, was the launch of Element, a new scientific communications specialty that draws on MDs, PhDs, MSs and other scientific experts across the Weber Shandwick network.

Initially, Brands2Life’s target market was the technology sector, but the firm has evolved and now brings its expertise to bear on a broader portfolio of brands in the retail, travel, hospitality, healthcare and professional services sectors, and with a broader range of services, including digital and social media and a new sports and entertainment marketing capability. A significant development over the past couple of years is the introduction of the firm’s “From Idea to Impact” campaign development methodology, which has opened the door to working with client sales, marketing and communications teams to develop campaigns with a genuine focus on business results, including sales, and is now embedded throughout the agency. That helped the firm to grow by about 10 percent during its most recent financial year, to around £7.8 million, with new clients such as Appletiser, EMC, Grant Thornton, Groupon, John Lewis, Rentokil-Initial and TravelSupermarket joining the likes of Cognizant, Google, Logitech, Nominet and VMware.

Over the past 16 years, BlueFocus has established itself as the largest independent public relations firm in China, with more than 1,000 employees in Beijing, Shanghai and Guangzhou and 23 regional offices and 2012 revenues of more than $80 million. In early 2010, the firm because the first Chinese PR agency to go public, listing on the Shenzhen Stock Exchange and suggesting that its growth would not end at its domestic borders. Last year, the firm inked a strategic alliance with Japanese giant Dentsu and In early 2013 the global scope of its ambitions were confirmed when the firm took a 20 percent stake in global PR holding company Huntsworth, providing it with access to a network of offices in Europe and the US. The firm is distinguished by its impressive media relationships; by the quality and stability of its client roster—companies such as Cisco and Lenovo have been working with Blue Focus for more than a decade and the firm also works with Toyota, Jaguar Land Rover, Baidu, Chrysler, Mead Johnson, Volkswagen, Sony Ericsson and many more—and increasingly by its strong credentials in digital public relations.