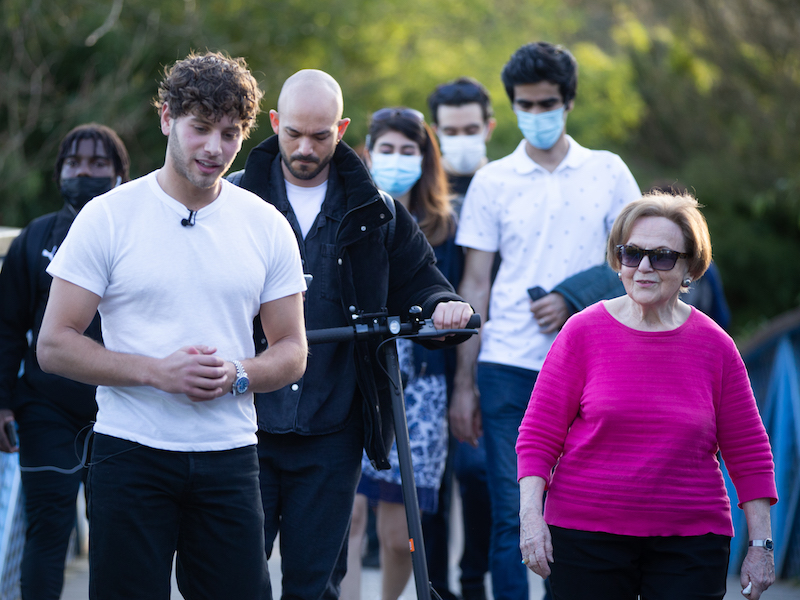 LONDON — Good Relations has been hired by engineering consultancy Atkins to deliver a campaign as part of its DE&I programme, after a competitive pitch. The agency’s brief is to promote greater equality, diversity and inclusion in an industry where only 12% of engineers in the UK are women, and only 8% are from Black, Asian or ethnic minority communities.

LONDON — Frank is working with Holocaust education charity March of the Living, with a campaign to mark Holocaust Remembrance Day. Pre-Covid, the charity marked the day with a 3km walk with Holocaust survivors and hundreds of others from the gates of Auschwitz to the site of the gas chambers in Birkenau. This year, the agency has made a series of emotional and educational films called ‘Meet the Survivors’, with celebrities including Matt Lucas, Robert Peston, Karren Brady, Eyal Booker (pictured) and Ronnie O'Sullivan meeting survivors to hear their stories.

LONDON — Marks & Spencer has appointed fashion specialist Aisle 8 as its PR agency for womenswear, menswear and childrenswear. The agency will support Marks & Spencer's in-house press office with feature and story pitching, and managing media relationships, as well as working on brand campaigns. The agency team – led by Virginia Norris, who was head of PR for Harrods before co-founding the agency in 2016 – will report to M&S head of product PR Jessica Harris.

LONDON — Rachel Bell, the founder of Shine, has launched a new business growth consultancy, Brand Spanking Consulting, to help businesses achieve their potential. As a non-exec for agencies including BECG, and as co-founder and chair of Academy Media Group, John Doe Group and Aduro Communications, Bell said she had seen a need for business and agency owners to have senior support across head office functions beyond CEO mentoring as they grew and planned for exit. Bell is joined by five founding partners, all ex-members of the Shine board, with different specialisms: Erika Kessel (marketing/client development); Lisa Rodgers (HR/operations); Brendan O' Connor (finance); Peter Hayward (pitch mentoring); and Alison Springham (M&A).

LONDON — Engine Mischief has appointed Alicia Mellish as a director on its leadership team. She joins from Golin, where she was an executive director on the consumer team, working on global campaigns for Lego and leading all UK brand communications for Mondelēz, including Cadbury, OREO, Philadelphia, Belvita and Green & Blacks. Mellish previously founded Stir PR and led the agency for seven years.

LONDON — Legal and litigation PR agency Maltin PR has appointed former BBC legal affairs correspondent Clive Coleman as a consultant. During 16 years at the BBC, Coleman reported on high-profile domestic and international legal stories, and was previously the presenter of Radio 4’s legal analysis programme, ‘Law In Action’, as well as presenting programmes including Panorama. He started his career as a practicing barrister. In his new role, Coleman will advise clients on a range of legal PR, litigation PR and broadcast matters, including media training.

DUBAI —Hill+Knowlton Strategies METIA account managers Karim Khafaji and Aliasgar Gulshan have won the MENA Young Lions PR competition 2021, organised by PRCA MENA, and will go on to represent the region at the global Cannes Lions International Festival of Creativity’s Young PR Lions competition, sponsored by ICCO. The winning duo responded to a brief from Young Arab Leaders, and had 24 hours to create a campaign that would encourage UAE-based businesses to invest in supporting the organisation.

LONDON — PR and content agency Play has won two new retainer clients: the team will lead launch strategy for new hotel booking site Hoo this summer, including press office and creative activations. The agency has also been appointed by ZYN to promote its nicotine pouches range in the UK.

LONDON — Sunny Side Up's corporate division has won a brief from agritech firm Saga Robotics. The agency will define the company’s corporate brand positioning, visual identity and communications strategy and then implement a corporate communications campaign.

LONDON —  Bubble Agency, the PR, marketing and events specialist for the media and entertainment technology and services sectors, has been appointed by Xencelabs Technologies, a new company developing digital drawing tablets and accessories for design professionals, including the Pen Tablet. The agency will lead PR strategy and activities for the company’s launch and beyond, including to the US and Canadian markets. The agency has also been hired by digital TV products and engineering services specialist iWedia to lead PR, marketing and social media strategy and implementation.

MANCHESTER — Digital PR agency JBH has appointed Lauren Wilden as digital PR manager. Wilden joins from 10 Yetis where she spent nearly eight years, most recently as head of PR, working on campaigns for the likes of Hillarys, Optical Express and holidaycottages.co.uk.