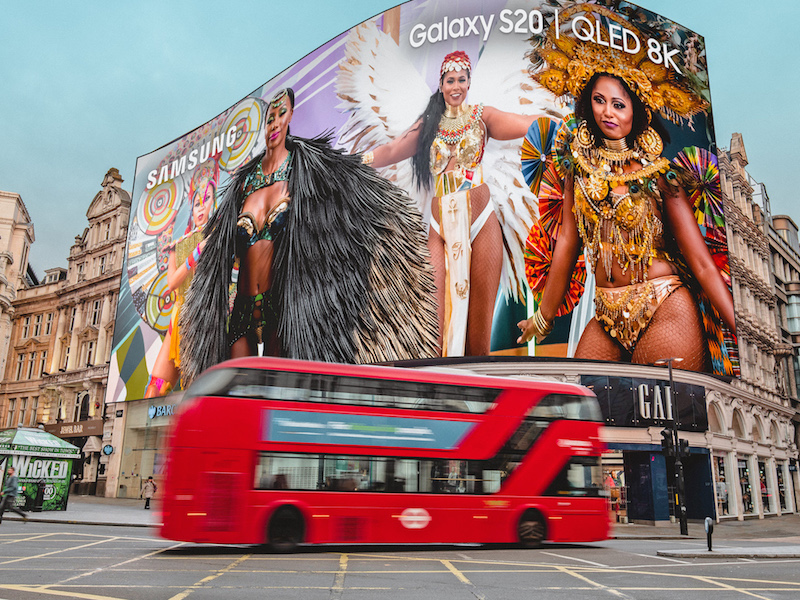 LONDON — GVC Holdings, the FTSE 100 betting group that owns Ladbrokes and Foxy Bingo, has appointed Tessa Curtis in the newly-created role of head of media relations. Curtis has run her own agency since 2003 and was a former corporate MD at Weber Shandwick.

LONDON — Taylor Herring created a multi-platform campaign to support Samsung’s partnership with the first virtual Notting Hill Carnival, taking place over the August bank holiday weekend (pictured). The team was briefed to amplify Samsung’s ‘Shoot in 8K. Watch in 8K’ marketing campaign, and has produced a series of short films with percussionists, dancers, costume designers and chefs, all shot on Galaxy 20 phones and screened on the carnival’s YouTube and social media channels and giant outdoor screens.

LONDON — Borkowski has hired a new head of corporate, Lottie Wilkins. She has worked as a freelance at agencies, including Edelman, Ketchum, Freuds, Talker Tailor Trouble Maker and Porter Novelli. Wilkins will be responsible for corporate accounts such as SafeToNet, relationship app Paired, and the National Citizen Service. The agency has also promoted Gregor Cubie to head of strategy and planning. He joined in 2013 as an arts and entertainment publicist.

LONDON — Tin Man Communications has won a government-backed digital education campaign representing the UK creative industries, following a four-stage pitch process. The brief will raise anti-piracy awareness for the Get it Right From A Genuine Site initiative by Creative Content UK, a collaboration between the record labels association BPI and MPA, representing the global film, TV and streaming industry. Tin Man will be handling owned, shared and paid as well as earned media.

LONDON — Global influencer marketing agency Takumi has launched Takumi X, a creative division enabling brands to work closer with creators on platforms such as TikTok, Instagram, YouTube, Twitch and Snap. Following Takumi’s research, which found influencers value ‘creative control’ above all else when working with brands, creators will be involved from the beginning of the brand campaign. The division is led by newly-appointed chief strategy officer, Jim Meadows, who has managed social media content for brands including Virgin Media, Redbull and British Red Cross and co-founded specialist agency Commit.

LONDON — The British Interplanetary Society (BIS), has appointed Centropy PR as its agency of record following a communications review. The BIS is Britain’s think tank on space deployment, devoted to initiating, promoting and disseminating new concepts and technical information about space flight and astronautics through meetings, symposia, publications, visits and exhibitions. The UK’s space industry has trebled in size since 2000 and contributes £5.7 billion to UK GDP. Centropy will provide media relations, content creation and social media consultancy as part of an integrated communications brief.

LONDON — Global Women in PR is inviting responses to its Annual Index survey, run with Opinium Research. The survey, which focuses on leadership, the working environment, flexible working, the impact of caring responsibilities and the mental health of women working in PR and communications around the world, can be filled in here until 21 September.

DUBAI — Gambit Communications has been appointed as the PR agency for Help, the cybersecurity arm of Etisalat Digital. The company joins Fiat-Chrysler Automobiles, Ferrari, The Ritz-Carlton, Meraas, Maserati and Pagani on the books of the agency, which was launched in 2019.

LONDON — Martel+Ram, a new men’s shoe company which aims to blend classic English footwear design with the comfort of trainers, has appointed Boldspace to a comprehensive brief spanning strategy, creative, marketing, and PR. The business has tasked the agency with defining its positioning and communications strategy. The work will be led by Boldspace co-founder and director, Nick Ford-Young, reporting to Martel+Ram co-founder Charley Ram.

MOSCOW — Moscow State University of International Relations and Russian lobbying firm Baikal Communications Group have developed a five-day course on government relations for public affairs practitioners and chiefs of staff within companies and NGOs. The ‘GR School’ will run from 27-31 October this year.