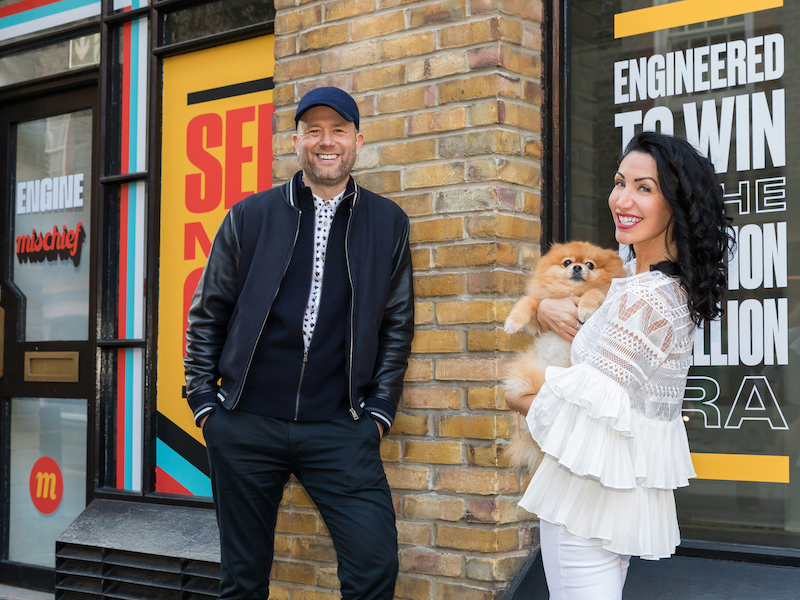 LONDON — Frank has been appointed by SpaceThreeTwo, a start-up looking to revolutionise how businesses and their teams use offices in the post-Covid-era, after a competitive pitch. The agency will work with SpaceThreeTwo to raise awareness of the new office timeshare, which allows SMEs to find other businesses to share an office space with, and also offers commercial landlords the chance to list vacant premises. Frank is tasked with building brand awareness of SpaceThreeTwo and positioning founder Jon Dweck as a commentator in the future of work conversation.

LONDON — Mischief has unveiled a refreshed brand and positioning – “engineered to win in the attention rebellion era” – to reflect the agency’s greater focus on helping brands to earn and win the attention of consumers via work that is “personal, surprising and emotional”. Head of client services and operations Daniella Bertolone (pictured, with MD Greg Jones) said: "Mischief has always been about earning attention with stand-out creative campaigns that deliver measurable business impact. Ever since then, our single mindedness on serious attention-seeking hasn’t changed. In fact, as we move firmly into our teenage years, that focus has simply evolved...that’s why we say we’re growing up without growing boring".

LONDON — EE-powered new mobile network To The Moon Mobile has appointed Red Lion as its retained UK agency after a competitive pitch. The agency has been briefed to build awareness of the brand – which plans to introduce super flexible tariffs and built-in crypto wallet – among a Gen Z and young millennial audience, with media engagement around its future-focused products, as well as devising and implementing an influencer marketing campaign.

LONDON — Mush, the social app for mums, has appointed Boldspace to drive strategy following a credentials pitch. The brand, launched in 2016, enables mums to find local connections and host meetups, as well as providing them with expert advice and content. Boldspace has been tasked with defining a new positioning and benefit-led strategy to make Mush stand out. The work will be led by Boldspace co-founder and director Nick Ford-Young, reporting to Mush founder Katie Massie-Taylor.

LONDON — Rooster has won two new clients after competitive pitches. Crowdfunding platform The Big Give has briefed the agency to support its annual Christmas Challenge campaign, with Rooster matching the project’s PR campaign budget with pro bono activity by doubling the team time allocated to the campaign. In addition, Bloom, the UK’s first plastic-free flower delivery service, has asked the agency to build awareness of the new brand and drive sales.

MANCHESTER — The Association of Financial Mutuals, the trade body which represents mutual and not-for-profit insurers, friendly societies and other financial mutuals across the UK, has appointed Smoking Gun to handle its PR. As part of the brief, Smoking Gun will be working on a project to promote mutuals to consumer and trade audiences, including creating clear and relevant messages about the value of mutuality.

MANCHESTER — Following a raft of account wins including mattress brand OTTY and genealogy brand MyHeritage, digital PR specialist JBH has tripled in size, hiring 10 new staffers. The new cohort includes three graduates, as well as Lauren Henley from Every1 in Preston as digital PR manager. Co-founder Jane Hunt said: “Boutique agencies have been able to thrive and show off their flexibility throughout Covid. It is important to give graduates and juniors opportunities to grow, especially in a pandemic. The last few months have been crazy and now we are on a big recruitment drive to find the best PR talent in the North West.”

LONDON — Firstlight has strengthened its senior team with the promotions of Amelia Bullock Muir, Janelle Romano and Emma Collingwood to associate director. Having all joined Firstlight five years ago from Luther Pendragon, Weber Shandwick and Edelman respectively, the trio have played a key role in the agency’s development. The news follows the recent promotion of Sam Rowe to director, and the appointment of Zack King as associate director earlier this year.