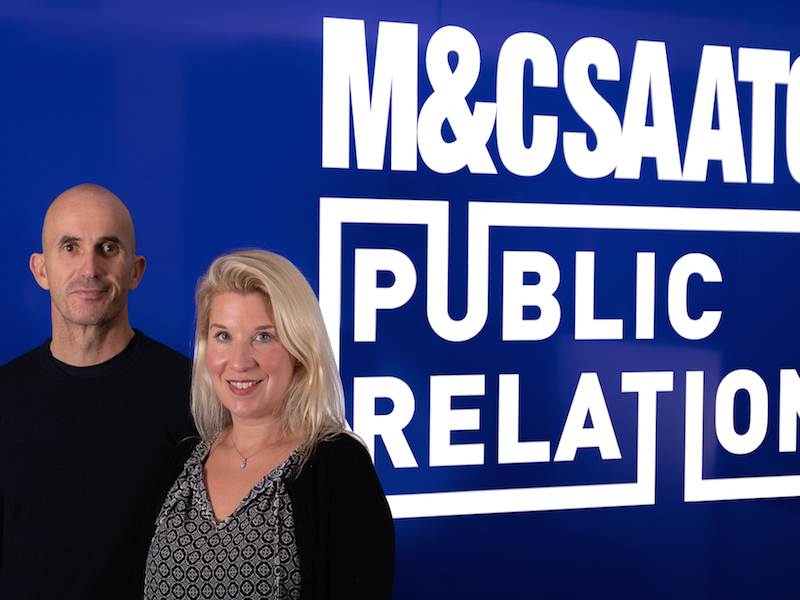 LONDON — M&C Saatchi PR has rebranded as M&C Saatchi Public Relations, as part of a global brand refresh. Global CEO Molly Aldridge (pictured, with global MD Chris Hines) said: “In a confused and converging communications industry, we wanted to provide clarity and simplicity on who we are and what we do.  We are passionately embracing our public relations heritage and how we apply the principles of our discipline in the modern age to clearly define our expertise across social, editorial and experiential for both our people and our clients. That’s why we’ve changed our name to M&C Saatchi Public Relations – a small but important differentiation.” The eight-year-old agency’s new offer is built around “Brutal Simplicity of Thought,” a founding principle of parent company M&C Saatchi.

LONDON — Social media and digital agency Social Misfits Media has become the tenth brand in The Brewery Group, the parent company of freuds. Founded by social entrepreneur and CEO Carlos Miranda in 2012, Social Misfits Media has a track record of helping NGOs, charities and foundations have a positive societal impact, building on its mission of turning “social media into social good”. Clients include the Bill & Melinda Gates Foundation, Amnesty International and Lumos.

LONDON —Milk & Honey PR has further expanded its leadership team. Caroline Addy, newly returned from Thrive PR in Australia, joins the agency as client director. Addy, who has also worked at Mischief , will be reporting to managing partner Kirsty Leighton with a remit to further develop the agency’s portfolio amongst consumer tech brands.

CAPE TOWN — Former Democratic Alliance MP Gavin Davis has moved to the agency world, as the new CEO of South African lobbying firm Resolve Communications. Davis served as a member of parliament on the communications, basic education, and energy portfolio committees and was the DA’s policy chief and director of communications.

BARCELONA — New research by reputation tech company Qnary, in partnership with Barcelona’s Center for Global Communication, has found that business leaders with public profiles can positively influence corporate growth, with almost two-thirds of people surveyed saying they would be more likely to recommend a company if they followed a senior executive online, and 56% would buy from their company. This figure rises to more than seven out of ten among millennials, and to 95% for respondents in China. The Changing Face of Executive Reputation study assessed attitudes among consumers 6,200 consumers across six countries.

LONDON — Munch has announced two new client wins. The boutique agency will help Asian food company Jollibee Foods Corporation to launch its first store in the UK and has also won a brief to deliver regional campaigns in Sunderland and Northumberland for The National Lottery Promotions Unit.

LONDON — The Public Relations and Communications Association is launching a sectoral group for the growing number of virtual agencies. The new group is co-chaired by Nicola Regazzoni and George Blizzard, co-founders of The PR Network. Regazzoni said the group would “further establish virtual agencies as a valid career choice for senior PR practitioners, and a credible option for clients.”

LONDON — Global media intelligence company Carma has announced a new leadership team. AMEC chairman Richard Bagnall joins as CEO for Europe and the Americas and will also hold the newly-created role of global co-managing partner. Paul Hender is the new COO for the regions, and Jason Weekes joins as commercial director.