Please refer to our Privacy Policy for important information on the use of cookies. By continuing to use this website, you agree to this.
Home Latest How Companies Treat Employees During Crisis Will Make Or Break Their Reputations 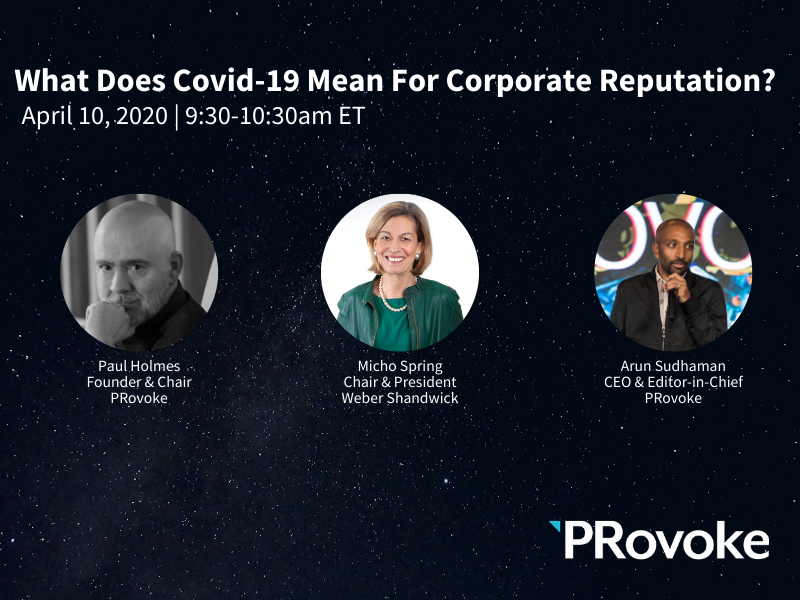 While the Covid-19 outbreak is affecting all of companies’ stakeholders, whether companies come out of the crisis with their reputations intact — or improved — boils down to how they treat employees during the pandemic.

“I think that companies that will be remembered are the companies that inspired their employees and companies that contributed to the solution,” Micho Spring, Weber Shandwick’s global corporate practice chair and New England president, said during a PRovoke Media webinar exploring Covid-19’s impact on corporate reputation.

“There is nothing abstract about any of this. It’s about life and death for employees. The fundamental principle here for all companies has to be that they do no harm for their employees,” he said.

Spring said the crisis presents “enormous opportunities for companies,” particularly those in the pharmaceutical and technology sectors, to advance reputations, as well as mend tarnished ones, by prioritizing employee well-being and taking actions to combat the spread of coronavirus.

“The interesting thing about this crisis is that we start with no villains, and everyone started with a blank slate reputationally to build based on how they behave,” she said.

At the same time, companies that don’t act according to the expectations of employees, have more to lose than those that weathered past crises due to the rise of employee activism — and their ability to push out information through social media, Spring said. “This is the first crisis we have gone through where employees have been so empowered,” she said.

“Employee activism is a new labor movement. They can organize in the minute,” she said.

Holmes agreed, saying that history shows that companies that don’t rise to the occasion will, over the long haul, be in the spotlight more than those who did right by their workers. “We remember the villains much more vividly than we remember the heroes,” Holmes said.

How companies’ actions will resonate with consumers, however, is not as clear cut. Holmes said he believes whether brands’ relationships with consumers will come out of the crisis stronger largely depends on what those relationships were like before the outbreak, and subsequent shutdown.  “It depends to a certain degree on the intimacy you feel you have with a company,” demonstrated through the likes of brand loyalty, he said.

Spring and Holmes also said that it is critical that sectors which suffered from consumer backlash before the pandemic don’t return, after the crisis, to engaging in the behavior that got them into trouble in the first place. That is particularly true for technology companies, which have suffered over the last few years over their handling of issues like privacy.

“I think it would be a huge mistake for anyone to come out of this to believe that the good will it generates in this crisis is any kind of blank check to go back to business as usual,” Holmes said. “And what you would hope is that technology companies will have learned a little humanity, little humility from this.  If they go back to the same practices that fueled the techlash … then whatever good they put into the trust bank will get withdrawn and depleted very quickly.”

Yet companies are still far from being in a position of having the option of returning to their old ways, good or bad, and face a plethora of reputational challenges as the crisis persists, taking its economic toll on business and its array of stakeholders.

Cutbacks, profit losses, working with governments and making public health a priority are among the tests that will become even more pressing as companies try to return to operations. So will navigating the Covid-19 containment controls that will vary widely with geography.

“I think communications is going to be crucial in that stage because it's going to be more confusing,” Spring said.

Regardless, it will be a journey the likes of which business has never seen, one that has little certainty — except that we can’t expect to return to life as we knew it.

Said Spring: “I think this is a sea change. It’s more than a crisis. It's going to reset the dynamics of everything we do around industry and government and the relationship between the two.

“It’s not going back to work; it’s going forward to work. Everybody’s attitudinal framework will be different.”