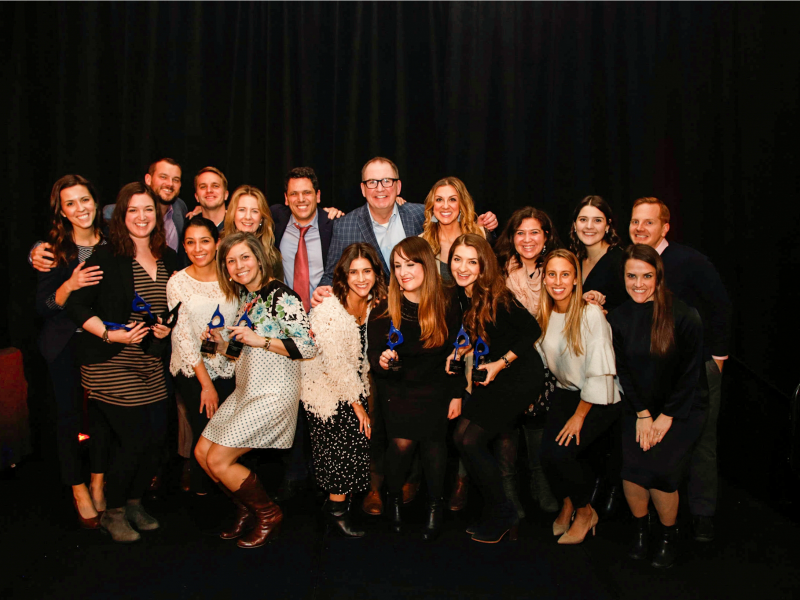 The campaign — that launched the Paqui brand — put the emerging snack maker against giants and broke through a saturated space.

The winners of the night included:


BEST IN SHOW - MOST INNOVATIVE

#1 The One-Chip Challenge
Paqui with Olson Engage
“The CEO called out this marketing campaign on an earnings call with analysts! In a category with lots of giants this was a way to stand out and resulted in a sales lift.”

#2 Eclipsing the Eclipse
Royal Caribbean International with Weber Shandwick
“An iconic and culturally relevant way to bring in younger consumers — with impressive business results to show for the eclipse cruise.”

#3 The Talk” – Creating a National Movement to End “The Talk” and Racial Bias
Procter & Gamble / My Black Is Beautiful with EGAMI Group
“Taps into the unique conversations black parentshave with their children to prepare them for biases — the video brought people into the black parenting experience. Memorable and resonates with cultural and social movements right now.”

#5 Staring Down The Street: State Street’s Fearless Girl
State Street with Ogilvy, River Communications, Water and Wall Group
"It was a zeitgeist moment — it went beyond viral. Incredibly bold move with results that blew me away."

From the judges: “An iconic and culturally relevant way to bring in younger consumers — with impressive business results to show for the eclipse cruise.”

From the judges: “The CEO called out this marketing campaign on an earnings call with analysts! In a category with lots of giants this was a way to stand out and resulted in a sales lift.”

From the judges: “Integrating with General Hospital was a smart and creative way to raise awareness about a rare blood cancer — with an impactful mix of traditional and social media support.”

From the judges: “A visually disruptive, three-dimensional branded sculpture of a vulva handcrafted of 16,000 live roses — bold and brave.”

From the judges: “True media exclusive with Mashable earned them handsomely. Media, brand and sales metrics are indicative of innovation and creativity.”

From the judges: “Brave — shows how SAP Ariba is going beyond typical CSR and looking to combat human trafficking within supply chains. The Fast Company story sets up the story beautifully and quickly segues into how technology can help solve this.”

From the judges: “BBC isn’t an easy media outlet — and I like how they laid out the challenges and then carefully managed each of these throughout the process. The final segment was fantastic coverage.”

From the judges: “Reached the right influencer with a clever and integrated thinking.”

From the judges: "Depicts the conversations black parents have with their children to prepare them for biases. Moving, memorable and resonates with cultural and social movements right now.”

From the judges: “Smart strategy to move the conversation beyond Caitlyn Jenner — extensive research in the next phase of the video and it pays off with nearly 7m views!”

Fight Dirty
Method with Kovert Creative
From the judges: “Creative use of humor and leveraging a popular comedic celebrity.”

From the judges: “Very strategic strategy that positioned Aperol against rose for day drinking — exceptional work that pulled through on strong metrics: awareness, consideration and sales.”

From the judges: “The effort was such a success that Land O’Lakes has enlisted Exponent PR to take the conversation to the next level.”

From the judges: “It was a smart and methodological approach to reaching a hard-to-reach audience, tackling a global problem. Results boosted visibility and supported sales.”

BEST USE OF INTEGRATED SOCIAL MEDIA

From the judges: “Who doesn't love grilled cheese? They got that. Excellent sales lift and partnerships. Fired on all cylinders — execution, strategy.”

BEST USE OF SOCIAL NETWORKS

Adobe Make It On Mobile
Adobe with Golin

From the judges: “The goal of collaborating influencers with the community was an astonishing success — original goal of 60 pieces of branded content was surpassed by 112%.”

BEST USE OF VIDEO NETWORKS

From the judges: “This was the first use of Facebook Live to show a patient living with this disease — an inventive way to solve the need patients have to connect.”

From the judges: “Brave — Excedrin didn’t need to wade into politics but found a strategic entry. The move paid off with 10% sales lift from previous year.”

From the judges: "It was a zeitgeist moment — it went beyond viral. Incredibly bold move with results that blew me away."

BEST USE OF GAMIFICATION/USER-GENERATED CONTESTS

From the judges: “Impressive how the contest succeeded in tapping into a human emotion and the community responded with 4,580 entries.”

From the judges: “The Queso Cup became the most engaged Instagram campaign in Chipotle’s history.”

BEST USE OF BLOGS

From the judges: “Powerful, moving narrative that extends P&G narrative as a cause-driven conglomerate on the back of #LikeAGirl, #SharetheLoad.”

From the judges: "Fantastic variety of communication styles — dynamic and compelling stories on sometimes dry topics."

From the judges: “Beautiful, moving videos use everyday moments to provoke conversation and increase purchase consideration especially for a new generation.”

Invest Like a Feminist
Pax World Management with RF Binder

BEST USE OF ILLUSTRATIONS + PHOTOGRAPHY

From the judges: “Pop-worthy imagery in a campaign where social media images led the design.”

T.R.I.P. Through The Multiverse
The Lights Out + Aeronaut Brewing Co. with Adam Ritchie Brand Direction

From the judges: “Creative integration of music, design, beer and a studio album — they released an album on a beer can!”

From the judges: “Campaign led directly to positive awareness — with the numbers to prove it. Design reflects the brand ethos.”

From the judges: “This was especially powerful in a year when being a woman was both challenging and empowering. It created a guideline for having women on boards — and resulted in other organizations asking how to do that.”

From the judges: “This smartly took insights that have been traditionally reserved for B2C into a B2B environment with a deep understanding of who the stakeholders were and developing strategic content to reach them at the right time. The results showed a significant increase in performance.”

From the judges: “Liked how it was cause-based with good follow-through with the event.”

BEST IN MEASUREMENT, POST-CAMPAIGN ANALYSIS
Bringing a New Generation of Campers to KOA
Kampgrounds of America (KOA) with Allison + Partners

From the judges: “Robust and insightful metrics following a highly-targeted campaign to update consumer perceptions around camping.”

From the judges: “Impressively identifies groups of individuals who self-select into highly-specific ‘media ecosystems’ to develop highly relevant content.”

From the judges: “Relevant and timely to help companies navigate this era of activism and uncertainty — it would make me hire Weber Shandwick.”

From the judges: “Built a platform that serves as a resource for the communications industry — professionals and students, while also bringing differentiation among prospects and clients.”

From the judges: “Inspiring future-looking program.”

BEST USE OF SOCIAL AND DIGITAL ENGAGEMENT ACROSS SECTORS

From the judges: “A series focused on the dangers of unsecured printing, starring Christian Slater required a thoughtful and complex strategy that resulted in impressive purchase intent.”

CRISIS MANAGEMENT
For Two-plus Years ASE Thought the Storm Would Blow Over. It Didn't.
ASE Group with the Hoffman Agency

HEALTHCARE
Be Vocal: Speak Up for Mental Health
Sunovion Pharmaceuticals with Biosector 2

From the judges: “Powerful videos that take a brave look at mental health —  both the struggles and the power of hope and recovery.”

From the judges: “Not only was the idea smart and creative — the end result was 52,000+ credit card signups, that’s very difficult to pull off.”

From the judges: “By January 21, there was at least one march in every U.S. state, many U.S. territories, and on ALL seven continents.”

From the judges: “Campaign led directly to positive awareness — with the numbers to prove it. Rebrand reflects the brand ethos.”

Writing Pimax Into The Record Books
Pimax with Dynamo Communications

From the judges: “Liked how they laid out the very real challenges — and was able to get get a much bigger competitor to notice.”

From the judges: “Liked how they laid out the very real challenges — and was able to get get a much bigger competitor to notice.”

From the judges: “A clever, affordable campaign that led to downloads in the crowded dating app space.”

From the judges: “The CEO called out this marketing campaign on an earnings call with analysts! In a category with lots of giants this was a way to stand out and resulted in a sales lift.”

From the judges: “The launch strategy drove the product design — and led to a relatively small player taking on some giants in a memorable and impactful way.”