Please refer to our Privacy Policy for important information on the use of cookies. By continuing to use this website, you agree to this.
Home Latest News Pros Want Media Literacy Campaign To Combat 'War On Truth' 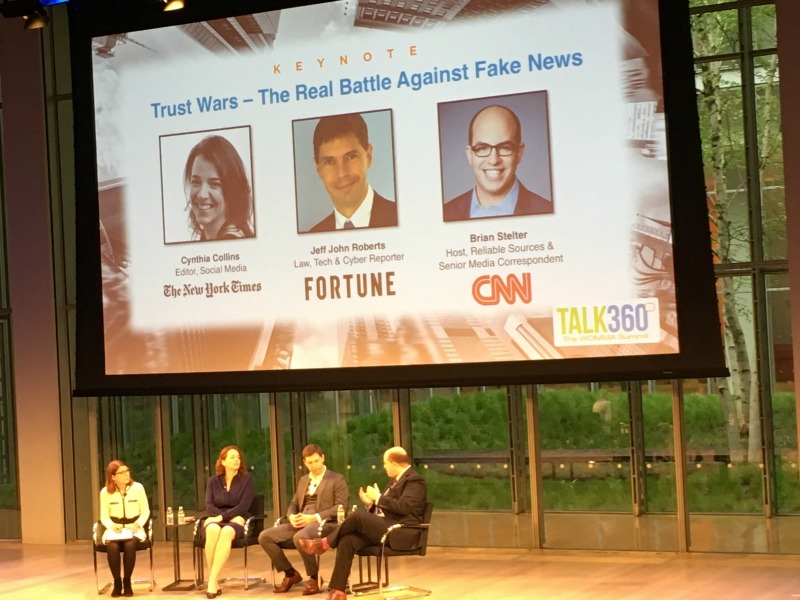 Experts cite media literacy for the public as a weapon against fake news, share tips for consumers to identify fake news from legitimate news sources.

NEW YORK — More public education is required to combat the rise of fake news, said a panel of senior journalists at last week's Talk 360 Summit in New York by WOMMA, the trade association dedicated to word of mouth and social media marketing.

"There is a battle underway for whether we can have a single set of facts, or if everything will always be in dispute," pointed out Brian Stelter, host of Reliable Sources and senior media correspondent, CNN.

The keynote panel, entitled Trust Wars - The Real Battle Against Fake News, addressed how the public can respond to the increasing threat posed by fake news. In addition to Stelter, the discussion was moderated by Deborah Holland, EVP of Publishers Clearing House, and featured Cynthia Collins, editor of social media at the New York Times; and Jeff John Roberts, law, tech and cyber reporter for Fortune Magazine.

The panel discussed various ways for consumers to identify and avoid fake news, with Stelter calling the battle "a war on truth." The CNN talk show host also likened fake news to "a poison that gets into people's bloodstream and affects them."

Topics ranged from the civic responsibility of social media platforms to stop sharing fake news, to laws monitoring fictitious news while honoring the First Amendment. The idea of media literacy, specifically educating the public on how to separate fact from fiction in the news, reoccured often, with the panel agreeing it could be highly effective.

"There should be a literacy campaign to help people recognize what real news looks like," said Stelter. Such an effort would include how to identify reliable news sources, fact checking, and considering who quotes and facts are attributed to.

Other potential solutions to the rise of fake news were also addressed, including Facebook's recent efforts to filter unreliable news from their feed, Google's Project Owl that enables viewers to report offensive or fake news while using the search engine, and Germany's recent bill proposing a €50m fine for publishing fictional or hateful news. All panelists were wary of enacting laws regulating media in the US.

"I don't want to put anyone in charge of saying what's real or not. If that happens, we've lost the First Amendment," said Roberts.

Collins aded that while social media platforms like Facebook and other websites should indeed make efforts to reduce misleading news, consumers need to be more responsible with identifying fake news and consulting reliable sources.

"It's also on the user to identify fake news," she said. "Fact check. Get out of your bubble. Ask yourself if the article has been independently verified and if reporters were on the ground." She noted that consumers should also take note of the publication or source, and get past catchy headlines, making sure to read through to the end.