Please refer to our Privacy Policy for important information on the use of cookies. By continuing to use this website, you agree to this.
Home Latest Politics & Business: Electing When to Take A Stand 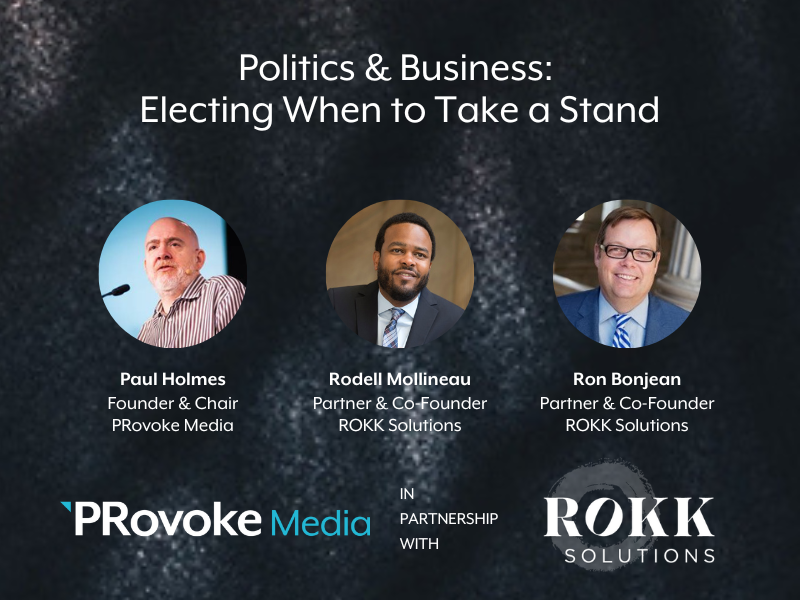 Politics & Business: Electing When to Take A Stand

Corporate involvement in local, state and national politics is a growing phenomenon. With upcoming elections potentially impacting businesses greatly, should businesses be getting involved? ROKK Solutions experts have the answers.

The 2022 U.S. midterm elections are only a few months away, and there are a number of hot items up for debate and on citizens’ minds— gun violence, the climate crisis and the ongoing presence of COVID-19, to name a few. In parallel, employees are seeking new employment more than the past few years — coined the Great Resignation — and consumers are being more mindful of where they put their dollars. Both employees and consumers are paying more attention to corporations’ policies and practices when deciding where to work and what to buy. All of this raises corporate governance questions for organizations, and they’re not sure what to do next: What does this change mean for organizational leaders in terms of addressing social issues, especially political ones? What are the best practices for companies considering taking a stand?


In this PRovoke Media Podcast, Rodell Mollineau and Ron Bonjean, co-founders and partners at ROKK Solutions, discuss the current political situation in the U.S., and its implications for business and PR. After all, in many cases, it’s no longer possible to avoid getting involved in public political debate. The pressure from customers and employees is too strong. But on the other hand, not every conversation is one a corporation needs to be part of.

“This is no longer just about inflation and crime, which I think Republicans would love for this election to be about,” Mollineau said. “It’s still about inflation, and it’s still about crime, but it’s also about reproductive rights. It’s about rule of law. There are many issues that will be on voters’ minds as they go to the to the ballot box in November.”

According to Bonjean, it’s important to come up with a plan now because stakeholders are going to demand it come November.

“There’s more of an expectation by the constituencies of a corporation, whether it’s the employees, suppliers, customers, that they play more of an active role in what’s going on with society,” he said.

Mollineau agrees and says it’s just the matter of getting a company’s ducks in a row.

“Companies have the tools,” he said. “It’s just a matter of organizing them in the right way. And that’s why they need a process and a framework. These [political involvement] decisions can’t just be made at the C-suite level, which is oftentimes where they are made. There needs to be a discussion about how these decisions affect the different business lines, how they affect internal and external stakeholders, how they affect your government affairs function.