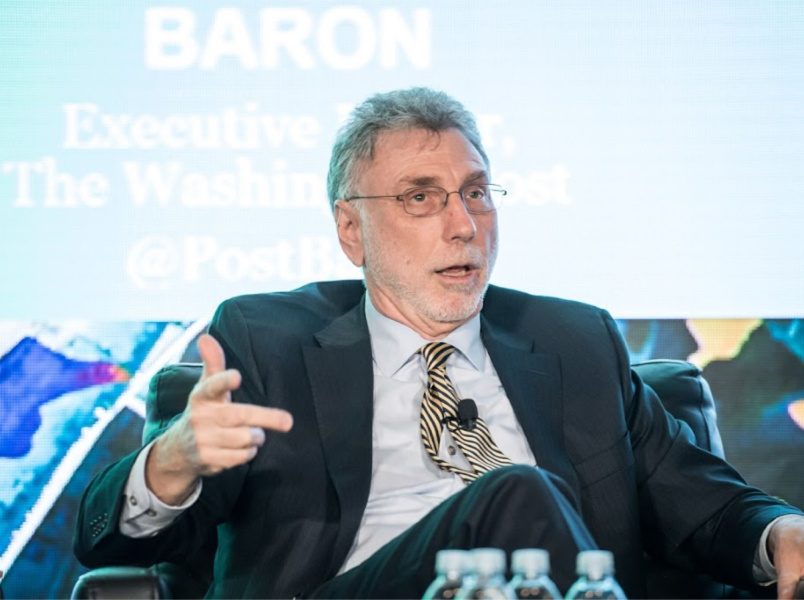 PRovoke18: With Journalism And Journalists Under Attack, Post Execs Speak Up

Journalists in the United States “are being threatened in a way we have never seen before,” Washington Post executive editor Marty Baron told the audience.

WASHINGTON, DC—Journalists in the United States “are being threatened in a way we have never seen before,” Washington Post executive editor Marty Baron (pictured) told the audience at PRovoke18, during a session moderated by Don Baer, chairman of Burson Cohn & Wolfe, that also included the Post’s publisher and CEO Frederick J Ryan, Jr.

On the same day that a suspected explosive device was discovered at the New York offices of CNN—and during a week dominated by news about the murder of Washington Post contributor Jamal Khashoggi—Baer asked about attacks on the media and whether Baron, a 42-year veteran of the profession, had ever seen anything similar.

"What’s distinct is that journalists within the United States are being threatened in a way we have never seen before,” Baron said. “We have had to increase security not only for our newsroom but across the organization. It’s important to remember that overseas journalists and media organizations have lived with this kind of violence for many years. But we have an environment of hostility in this country that has gotten worse in the current political situation, and it’s motivating some people to take these actions.”

Expanding on the global problem of attacks on the media, Ryan pointed out that close to 50 journalists have been killed around the world in 2018, and 200 have been jailed.

He pointed the finger at the Saudi authorities and the shifting versions of the story that have emanated from the kingdom. “It has been a series of lies and one by one they have been knocked down. It’s almost as if they are throwing out stories until one of them sticks.”

That evolved into a discussion of another threat to the media—almost as serious as the physical threat—the charge that mainstream media are promulgating fake news.

The implications, he said, are frightening. “How can you have a democracy when you can’t agree a certain set of facts? There should be a robust debate and discussion, of course, but if we can’t agree on what happened yesterday, how can we have that debate?”

Of all the threats facing the media today, the one that drew the most optimistic response from Ryan and Baron was the economic threat. Both agreed that the transition of the Post’s ownership to Jeff Bezos had made a huge difference.

Bezos felt that the internet offered both pain and gifts to the media company—the biggest gift being global distribution. “We had a strategy that was primarily regional. We set out to appeal to a national audience and to appeal to a younger audience. It worked, and it produced growth and it produced profitability. Our owner doesn’t need the dividends, so we have been able to reinvest, expanding our editorial team, our social media team, we have invested in video.”

That strategy has helped the publication attract a growing number of millennial subscribers—about a third of the Post’s digital subscribers are now millennials.

Ryan, meanwhile, suggested that the Post had benefited from Bezos’ technology savvy approach in other ways. “Jeff Bezos doesn’t get involved in editorial, and he doesn’t really get involved in the business side of things, but he has helped us attract engineering talent, who are able to review ideas with him, bounce ideas off of him, and there’s a level of access that they would not get anywhere else. The resulting technology is used day-to-day in the newsroom where it gets constant feedback, and we have even started a new line of business where we are providing this technology to other news organizations around the world.

“This is not something from the print area that has been improved and modified, these are tools for the digital era, like a product that helps ads load faster, especially programmatic ads.”

The key to success, Ryan said, is a “partnership of world-class technology and world-class journalism.”