Please refer to our Privacy Policy for important information on the use of cookies. By continuing to use this website, you agree to this.
Home Latest PRovoke19: Fewer "Premium Opportunities" For PR Agency Sellers 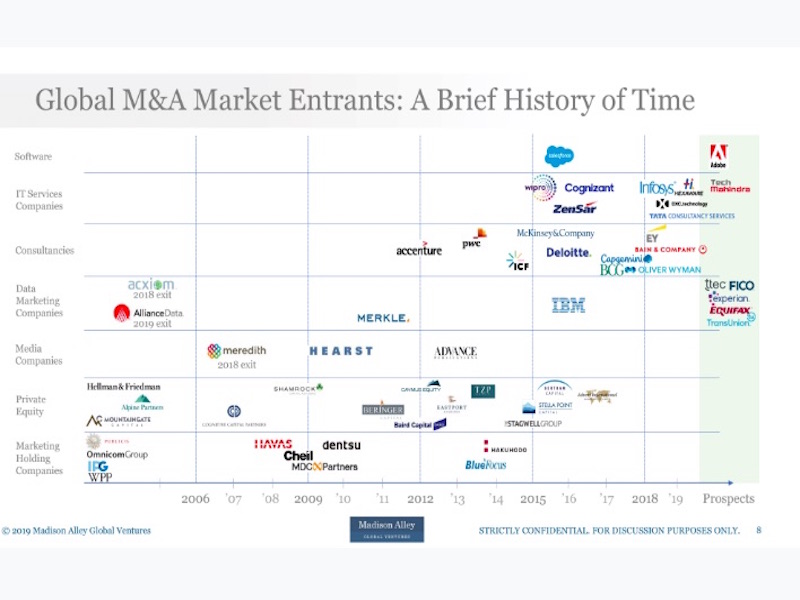 WASHINGTON, DC—The mergers and acquisitions landscape for marketing communications agencies has shifted dramatically in recent years, according to Michael Seidler, founder and CEO of Madison Alley Global Ventures, presenting at the Entrepreneurs’ Forum in Washington, DC, on Monday.

Seidler took time to depict the timeline of M&A activity in the marketing space, from the early days—dominated by giant US and UK holding companies such as Interpublic, Omnicom, and WPP—to the addition of international players such as Publicis Group and Dentsu, to more recent years, when the most active and most disruptive participants have been giant consulting firms like Accenture, Deloitte, EY and PwC.

“Accenture alone is five times the market cap of the big advertising agency holding companies,” Seidler pointed out. “These firms are trying to build a marketing services portfolio.” The acquisition of Droga5 by Accenture in May of this year was a clear indication that “these firms are looking for credibility with the CMO.”

But the dynamic and diversified acquisition landscape has not necessarily translated into new opportunities for independent PR agencies, said Alex Halbur, managing partner of Prosper Group, which sponsored and moderated the discussion on “The Deal of the Future.” Halbur pointed out that while surveys showed a high volume of deals in the PR business, there are still relatively few compared to the sizzling hot marketing automation sector, for example, and “even fewer premium acquisition opportunities.”

Seidler agreed: “These new acquirers are paying vastly higher multiples for digital marketing services, content creation, social creation, data and analytics,” he told the audience. “Many of these are things you have. But it’s a question of extracting those elements of the business and making them the focus of the story you’re selling.”

Jeff Piper, managing director of private equity firm Svoboda Capital Partners, brought a slightly different perspective to the discussion, explaining what attracts his firm to a potential acquisition. “For us, first and foremost, it’s about the people,” he said. “That’s by far the biggest factor in us getting involved in any service business, particularly in the creative sector.

“And it’s about developing a sustainable model. It’s not about the numbers as much as the culture and the business model, a stable and committed management team, and an environment people want to continue to come back to.”

The panel included three PR firms that have been active in the acquisitions realm, each of which represents a shift in the market in recent years. José Antonio Llorente, for example, is chairman and founding partner of LLYC (the former Llorente & Cuenca), a firm founded in Spain with a network of offices throughout Latin America and a rapidly expanding US business. LLYC has made a series of acquisitions—adding geographic reach and new digital capabilities—since it sold a minority stake to a private equity firm four years ago.

“We wanted access to capital and to knowledge and expertise in the M&A process,” he explained. “When we look at deals, they are more focused on the finance, and we take more into consideration the people and the expertise.”

Debra Delman is chief financial officer at APCO Worldwide, the giant public affairs firm that secured the support of Citibank and Monroe Capital two years ago to ensure its continued independence. She joined APCO a year ago, bringing considerable background in transactions and fueling speculation that the firm would revive its interest in acquisitions.

“Looking forward, I think the plan is to continue to grow organically and focus on operational excellence, but I think we will also be more aggressive in M&A,” she said. “We have plans to grow our west coast operations. We are in China since 1999 but we are looking at how to build more scale.”

The key to acquisitions, she said, would be to ensure that any firms that are bought become part of the “one APCO, one P&L” philosophy that has been critical to the firm’s organic growth.

“We feel that’s the best way to serve our clients because it allows us to bring the best talent to the table no matter which geography they are in,” she said. “So when we bring on an organization there is a transition period—it doesn’t have to be day one—but we are looking for them to be part of that one APCO idea. We look for people to earn-in rather than earn-out. We are looking for principals who want to grow with us.”

The final panellist was David Zapata, founder and CEO of Chicago-based Zapwater Communications, a boutique PR firm that has made a couple of micro-transactions—an increasingly prevalent part of the PR industry’s M&A environment.

“It’s all about mitigating risk for us,” he said, pointing out that as a small firm he needs to get every deal right. “The first deal we did—we are Chicago-based agency, and we needed a presence in LA. We asked ourselves, was it more of a risk to hire someone and hope that revenue would catch up—or make an acquisition. And we found an agency where the owner didn’t want to handle the business side any more but she wanted to stay on.

“In the second case, an opportunity presented itself in the Miami market, where the owner wanted an exit strategy. One factor was that both of the agencies we acquired were not strong in influencer and social, where we have good capabilities, and so we have been able to upsell their clients.”