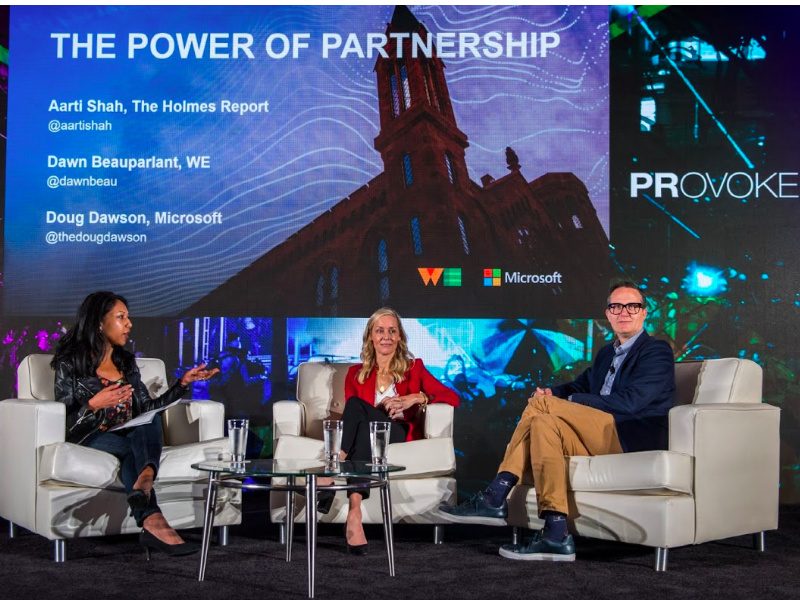 Microsoft's Doug Dawson and WE Communications' Dawn Beauparlant discussed how their organizations have sustained a three-decade long partnership on Wednesday at PRovoke19.

WASHINGTON, DC — Over the last 30 years or so, the average length of agency/client partnerships has gone steadily downhill, dropping from a high of roughly seven years down to three today.

Which makes WE Communications and Microsoft’s relationship of more than three decades not only a standout, but an anomaly. “Our partnership with WE is really the poster child,” said global communications general manager Doug Dawson of Microsoft, which works with around 55 PR firms around the world.

What fuels the longevity of the Microsoft/WE relationship — and what agency and in-house communicators can do to promote similar success — was the topic of a conversation on Wednesday at PRovoke19 among Dawson, WE chief client officer and North America president Dawn Beauparlant and the Holmes Report’s Aarti Shah.

Many of the positive pillars of the companies’ relationship are similar to those of successful personal connections — keeping close touch, being open and frank, speaking the truth and moving on after rocky moments.  "One of the keys to our success and our longevity frankly is our communications, there is a foundation of trust." Dawson said.

Having that trust takes shape in a myriad of ways, giving rise to mutual respect, supporting experimentation, embracing organizational and personal quirks and being able to disagree without being mean, the panelists said.

Sustaining a client/agency relationship also requires parties to be able to have those frank discussions that are bound to occur when you’re dealing with a company the size and stature of Microsoft in the ever-changing tech sector.

"When you are getting feedback, which is hard, the natural reaction is to step away. But I think the idea we are trying to instill is to step into that feedback, and coming out of it we are stronger,” Beauparlant said, adding that it’s important to react quickly to negative reaction from clients, “not waiting for the buildup”.

That applies to clients as well, Dawson said. "I don’t want to be the client from hell, I want to be listening to feedback,” he said. Microsoft has instituted a number of changes based on WE’s input, he said.

But that only works, Dawson and Beauparlant said, when organizations acknowledge and respect that they approach achieving their shared goals from different angles — and there is inherent value in that.

"There is definitely a mindset (among agencies that) your client knows best, but that's not always the case,” Dawson said. “We really rely on agency partners to provide us with an outside perspective... and sometimes when we're not listening, provide it again." Dawson said.

Beauparlant, however, noted that agencies often confront barriers to doing so, including their clients. "We might have the perspective to share, but are you ready to hear it?,” she said.

Beauparlant also credited the long-term success of the Microsoft/WE relationship in part to never taking the relationship for granted, and encourages the individuals who work on the Microsoft account to adopt a similar approach.

“One of the things I talk to the team about all the time is earning it every day,” while at the same time staying confident and independent while leveraging opportunity, and overcoming challenges.

“We need to be the connective tissue for our clients. We’re connecting the dots,” she said.