Please refer to our Privacy Policy for important information on the use of cookies. By continuing to use this website, you agree to this.
Home Latest PRovokeAP: How Digital Disinformation Disrupts Corporate Reputation Management 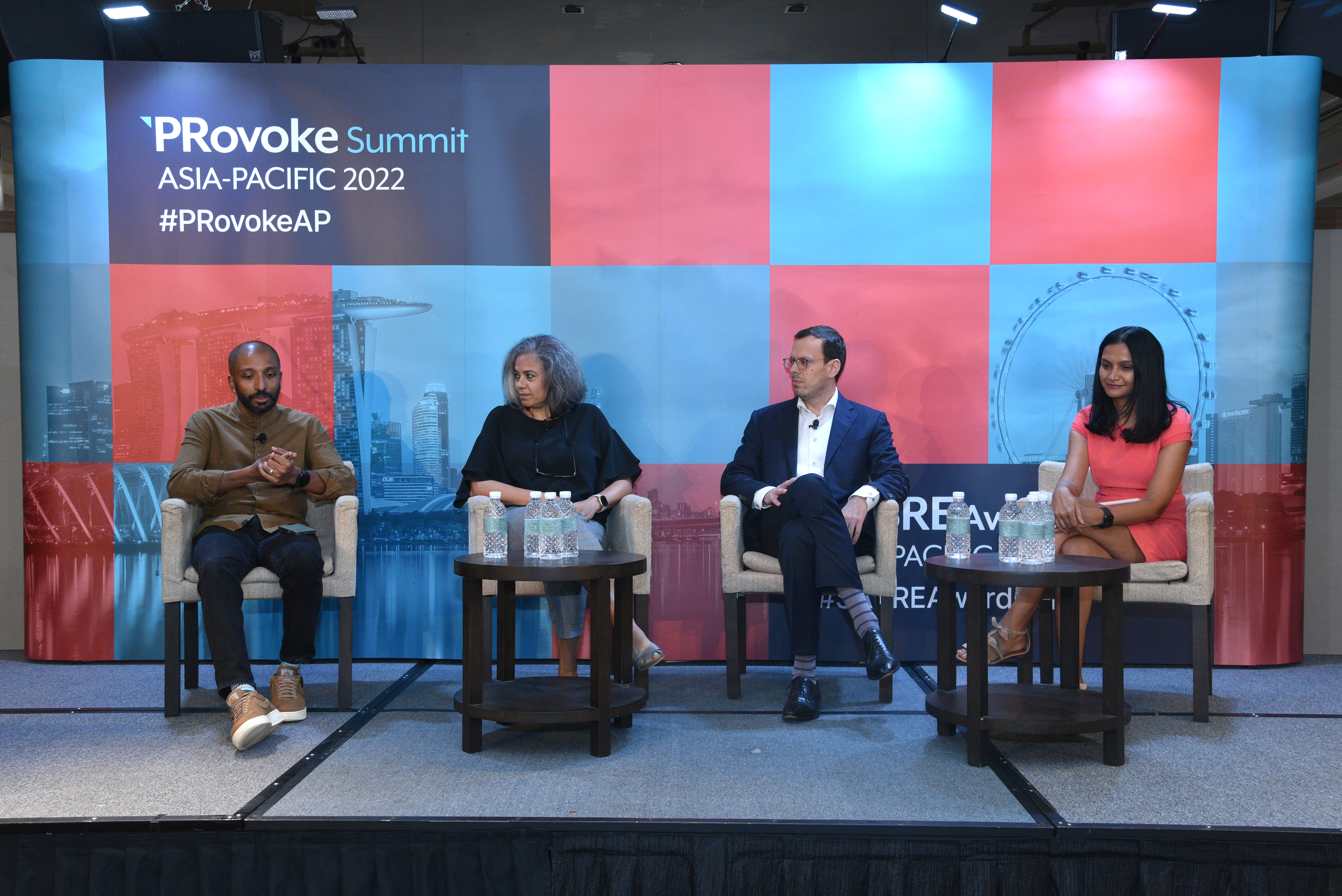 The speed at which digital platforms can spread both information and misinformation around the global is having a dramatic impact on how companies manage their reputations.

SINGAPORE—The speed at which digital platforms can spread both information and misinformation around the global is having a dramatic impact on how companies manage their reputations, according to a panel discussion on “Navigating Digital Reputation and Regulation,” sponsored by Sandpiper and taking place at our PRovokeAP Summit this week.

The panel, moderated by ProvokeMedia chief economist Arun Sudhaman, focused on the new threats to corporate reputation in the digital realm and suggested that regulation may be necessary in order to address miisinformatioin more generally.

Google Asia-Pacific vice president of communications Meenu Handu kicked off the discussion by challenging the idea that companies have a distinct digital reputation, arguing, “it’s just reputation, and the biggest thing for us as communications professionals is the messaging and that doesn’t change. What probably changes is the outreach with it, because consumption of news is no longer the same and audiences are not consuming content the way they used to.

“There is a significant drop in attention spans and the content you create needs to be that much more immersive and relevant. News is consumed in many, many different formats and so you have to create either your own platform or content that works across multiple platforms.”

Punitha Aranha, director of communications, innovative medicines for Novartis, made the point that how a company behaves will always have more of an impact of reputation than what it says. “Digital is an important part of reputation building but there are many other elements and it’s important to take a holistic approach and some of it goes beyond the control of the communications professional. You might be great at digital, but if the organization is providing poor customer service or pouring oil into the ocean, your digital communications are not going to save you.”

Handu made the additional point that digital technology has impacted both the speed at which information travels and how quickly it goes global. “Speed is a big factor in terms of the spread of information, and you have to consider context and relevance globally. You can’t make a statement in one place without having some ramifications at a global level, so that balance is something we have to grapple with at all times.”

Aranha agreed: “”Digital means that borders and boundaries don’t matter so much. So you could be making a business announcement on divestments or restructuring and what might be a very local announcement we have to factor in what happens when those who are unhappy with the announcement leverage digital to make their views heard beyond the country. It can be about five people but they can get a lot of traction because of digital.”

But Rob van Alphan, director of strategy and innovation at Sandpiper, points to a growing risk to reputation in the digital realm. “The way we consumer news is changing. TikTok is a great example: it’s a fairly new social platform but one in three young people is using it as a main source of information. It’s the fastest growing source of information for adults as well. So now TikTok videos are appearing at the top of your search results in Google, so whenever you are looking for a company, a brand, or an industry topic, this kind of content can easily outrank a company’s own properties. And this is a space you as a client do want to own because most online experiences do start with the search engines.

“If you look at this through the lens of a crisis, any kind of negative news will have greater longevity, after the crisis has ended and this could influence your sales, it’s going to scare off potential hires, people have lost deals because of this. So the challenge is how do you manage your online presence with algorithmic changes that influence your brand visibility.”

The digital and reputation landscape for healthcare communicators in particular has changed dramatically, Aranha says.

“The names of pharma companies have come into homes. Even my mom and grandma now talk about Pfizer and Moderna and AstraZeneca when they never would have previously. That has brought benefits, but there have also been downsides, the most obvious one being around misinformation, healthcare misinformation, which was particularly a problem during the early stages of the pandemic when nobody really knew much about the virus and people had no credible sources and couldn’t distinguish between what was credible and what wasn’t. so there’s a lot that needs to be done in terms of providing credible information and the industry has a strong role to play in that.”

Van Alphan delved deeper into the subject of disinformation: “Fake news is an interesting one because it’s such a broad term. For example, deep fake tech is advancing at a rapid pace, where almost at the click of a button you can make these images or videos of a politician or a corporate leader that are almost indistinguishable from real.”

He talked about pandemic-related misinformation, including the rumor that drinking hot water could cure Covid. The UN initially responded by putting out factual information about what was know about the disease and how it spread, but those facts were not as impactful as expected. “So they slightly tweaker their comms approach and they started taking this misinformation, integrating it into their own communications, and debunking it, and correcting it.

“It’s a very small change in how you communicate, but it was a lot more effective.”

For Google, Sudhaman pointed out, “fake news” presents both a reputation challenge and a technological one, as the company seeks to ensure that authoritative and accurate information features more prominently than disinformation.

Says Handu: “There’s a lot of work we’re doing in that area. First and foremost, using AI and thousands of people around the global, we’re looking at content, but you have to remember that there are billions of pieces of content uploaded on a daily basis. The odds are stacked. The other thing we are doing is to create an ecosystem of people who can help verify facts. And the third thing is to put forward more trusted sources, especially in a crisis like Covid, so trusted news sources and government information. And then the fourth thing is giving people the tools to be able to verify.”

With the panel acknowledging the difficulty of identifying and countering disinformation in a polarized world, Sudhaman asked whether there might be regulatory solutions and whether it might be necessary to strike a new balance between free speech and accurate, factual discourse in the digital realm.

Aranha pointed out that the pharmaceutical industry is already highly regulated in terms of what it can say—in digital channels and other communications—about the efficacy of its products. All content goes through legal, medical, and compliance checks; employees are trained in what they can and cannot say on private social channels.

Google, meanwhile, is the cross-hairs of regulators, some of whom want to restrict the spread of misinformation and some of whom are using free speech concerns to oppose the company’s efforts to prioritize sound information.

Says Handu, “The world today is an increasingly digital world, but the laws and regulations that exist are for a different world and a different era. So it’s very natural that they need to be updated and to keep pace with change. We are very cognizant of the fact that these are challenges that need to be dealt with. But not every regulator understands this new world, so it’s an opportunity for us to make sure we educate them so there are no unintended consequences.”

"All of these digital platforms it’s very easy for a message to reach mass amplification and the impact can be very drastic. And from the consumer point of view issues like cybersecurity, trust and safety are some of the top concerns when dealing with any kind of online platform. So the expectations are actually growing.”