Please refer to our Privacy Policy for important information on the use of cookies. By continuing to use this website, you agree to this.
Home Latest PRovokeEMEA: Addressing The Racial Pay Gap In Influencer Marketing 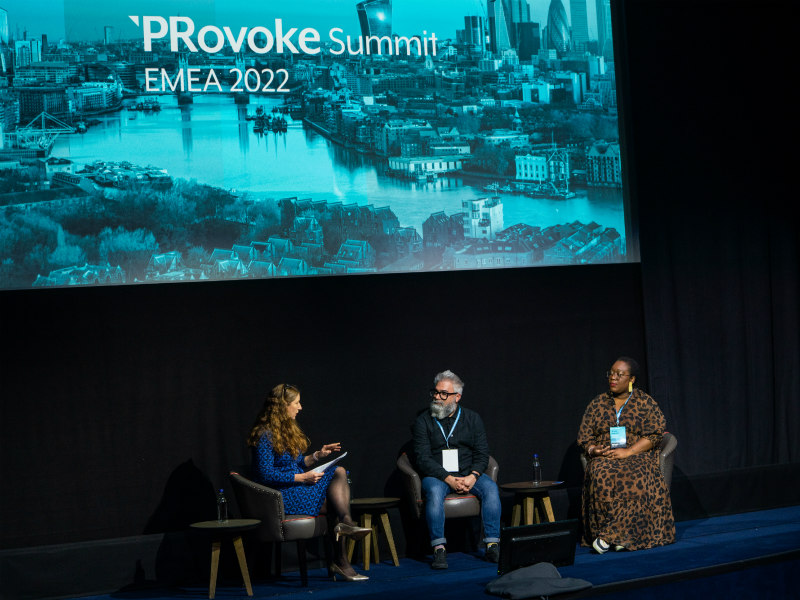 “Integrity comes at a cost,” Neil Kleiner, managing partner and head of influencer marketing told the audience at our PRovokeEMEA Summit in London this morning.

LONDON — “Integrity comes at a cost,” Neil Kleiner, managing partner and head of influencer marketing told the audience at our PRovokeEMEA Summit in London this morning, explaining that to build productive, mutually-beneficial relationships with influencers, agencies need to be aware of the existing pay disparity between white influencers and people from the BAME community, and be willing to address those disparities.

In a session on “Confronting the racial pay gap in influencer marketing,” sponsored by MSL, Kleiner discussed the agency’s research into the gap in compensation and the way in which it is partnering with influencer marketing groups to help people on both sides solve the problem.

“In a values-based world, influencer marketing can build belief like no other medium,” Kleiner told a packed audience at London’s Ham Yard Hotel. “It’s one of the few remaining opt-in media. It’s a medium where connections can be made around shared passions, which is really powerful.

“But there are some issues facing the practice as it drives toward maturity. The value exchange is fundamentally not working. We are having the same conversations about measurement we have always had. Clients get lazy, unimaginative execution, often based on lists rather than on creative ideas, and influencers are getting the raw end of the deal and there is a very real pay disparity, which we are discussing today.”

In the US, Kleiner said, MSL was aware of a likely pay gap—“an open secret,” he called it—but there was very little data to prove it. The US operation of MSL partnered with The Influencer League to research the topic, and found a 28% pay gap between white and BIPOC influencers and an even more troubling 35% gap between Black and white influencers—the largest pay gap in America across a host of professions.

The research also explored the reasons for the pay gap. “Education was a key factor, and education around how to negotiate in particular,” Kleiner said. “We come to influencers with offers that are lower because we are trying to deliver value for our clients and there’s a lack of conversation and transparency around what a fair price is, so we find people with 8,000 followers charging more than people with 100,000.”

The only exception to the gap was at the very top of the influencer pyramid, where larger influencers, macro-influencers, had their own agents, the kind of representation that could help them negotiate an equitable rate.

As a result, he said, 50% of Black influencers felt race was an issue. They also believed that those who spoke out about racial justice issues found that their fees dropped immediately after. A year on from the murder of George Floyd and the rise of the Black Lives Matter movement, “brands were backing away from influencers who spoke out.”

In the UK, meanwhile, MSL is partnering with SevenSix, a Black-owned influencer marketing agency that did some research on this topic two years ago, and with Tinuke Bernard, a Black blogger and influencer, who founded the Black Influencer Directory. The preliminary findings suggest a racial pay gap of more than 20% in the UK.

“There definitely is a pay gap,” said Bernard. “I’ve had people send me contracts intended for other influencers by mistake where there was an extra zero on the contract even though that person’s followers were not that much higher than mine. And there is a conversation, influencers talk to each other, and so we know what’s going on. It can be soul-destroying.”

Bernard said she launched the Black Influencer Directory a few weeks after the George Floyd murder in the US. “There was a lot of performative support from companies, lots of lists of four or five black influencers you have to follow—and it was always the same four or five. And there are so many more Black influencers than that, so I created my own list of about 250 black influencers across many genres. It’s pretty basic, it’s just an Excel spreadsheet, but overnight there were 20,000 views. People wanted this and needed it and we got a lot of great feedback from PR people and from influencers.”

It has also positioned Bernard as an expert, providing guidance to Black influencers hoping to understand how to negotiate a fairer price, and also for agencies looking for advice on how to approach and work with Black influencers.

“Don’t approach it as an us versus them situation,” said Bernard. “It doesn’t always feel like a level playing field. And remember that there’s more to it than follower numbers. Sometimes you feel like it’s a tick box: you’re the Black woman influencer.

“But it’s about brand engagement. There are so many ways we can help you. Trust us to do a better job, trust us to know what will work with our followers. When agencies take the time to chat and listen, when you feel they have actually looked at your work, we can add more value. Get to know the person, give them the space to be creative.”

The best agencies, she said, approach influencer marketing as a long-term partnership rather than a one-off transaction. To do that, Kleiner said, agencies have to recognize that building a relationship may require agencies to invest more in Black influencers, to offer higher compensation levels than the current market rates suggest.

In the US, MSL has sponsored 1,000 influencers to take The Influencer League training, which includes negotiating, identifying key trends that can increase the impact of content, even work-life balance for influencers. And the firm is plugging compensation data into its Fluency database—the firm’s property tool for influencer marketing.

“Part of the challenge is to continue to talk about this,” Kleiner said.