Please refer to our Privacy Policy for important information on the use of cookies. By continuing to use this website, you agree to this.
Home Latest PRovokeGlobal: Dr Monica Gandhi On Putting Risk Into Context 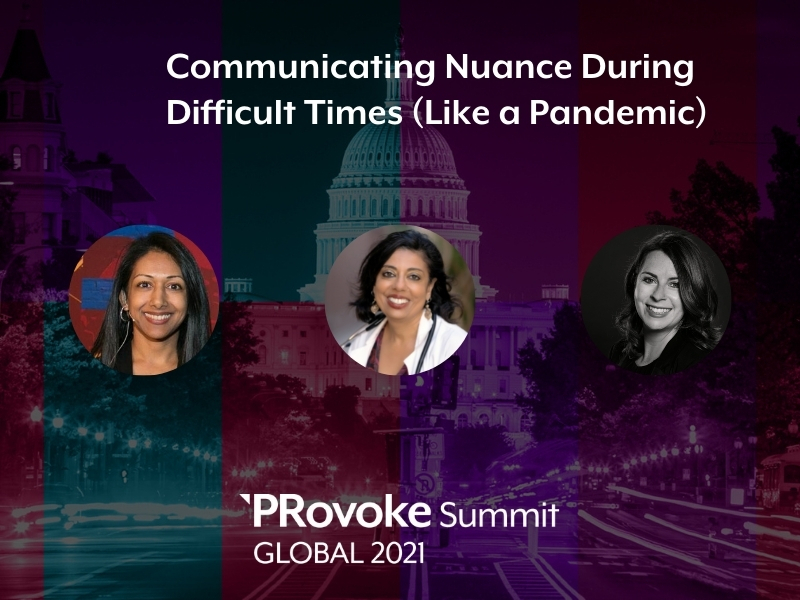 Ever since the vaccine rollout, the Covid-19 messaging has become muddled between optimism and doom — causing conflict among experts and increasing confusion with the public.

This tension between messages of hope and fear was the focus of a session at the 10th PRovokeGlobal PR Summit featuring Dr Monica Gandhi, infectious disease and HIV doctor at University of California - San Francisco.

"Misinformation is very hard to control in the setting of the Internet and social media,” Gandhi said. “But what we can control better from the Biden Admin is positive messaging. I know I've been accused of being too positive but I've seen it be motivating with HIV."

This was especially challenging this summer with the Delta variant’s somewhat surprising surge — and its impact that called for a nuanced response, causing strife among healthcare experts. For instance, in high-vaccine areas case rates spiked, but hospitalizations didn’t follow the same curve. “That is really consistent with immunology,” Gandhi said. “But since every state was experiencing it differently it was hard to communicate one thing about the Delta variant.”

In late July, the CDC sent a sobering message that vaccinated people can transmit the virus, perhaps at the same rate as the unvaccinated. The media coverage resulted in alarming headlines, most of which have since been walked back, but it demonstrated the risk of over-indexing communications around fear.

“The phrase that vaccinated people were as likely to spread the virus as unvaccinated had no nuance to it what-so-ever,” Gandhi said. “That phrase was taken out of context and was a soundbite that’s not true...What it did was terrify the vaccinated and it made the unvaccinated think the vaccines don’t work,” adding that it was “fearful and ill-conceived” messaging.

One major consequence of the botched messaging has been backlash against vaccine mandates with some questioning why mandates exist if they don’t protect others.

“The guidance we always give is to be transparent about what we don’t know. Just like any other communication, being transparent, being clear, being simple with your messaging is key,” added Poe. And if mixed messages still emerge, confront them directly.

Gandhi also drew parallels with her work in the HIV/AIDS space — and how public health officials realized an abstinence-only approach was unsustainable and people have a profound need to come together.

“Not putting risk in context of other risks — like the risk of children missing in-person learning, social isolation and anxiety  — it felt like the beginning of the HIV epidemic where” refining the messaging around harm reduction took years.

As noted in a recent San Francisco Chronicle profile of Gandhi (sub req'd), her take is considered an outlier in the highly cautious San Francisco Bay Area. She addressed this by saying, the message of extreme caution resonated in the San Francisco Bay Area, in part, because of the area's affluence. People were largely able to stay home while keeping their jobs and having necessities delivered — but this wasn’t necessarily the case elsewhere.

The conversation also touched on the human limitations around understanding data — and that, according to Gandhi, is fear. Data and tables don’t address this very human emotion. Poe added that communicators can try to understand various ways that medical or scientific information might be interpreted.

“We really need to understand the lived experiences people have when they come into a conversation that can be as charged as this even when you have data that helps you to bridge where they are at and where you need them to be,” Poe said.

The session closed with Gandhi acknowledging the role that unconscious bias might have played in the vitriol she received online as a petite woman of color. “I don’t think it was personal, I wasn’t hurt by it but I do think we need to be open to our unconscious biases these days,” she said.