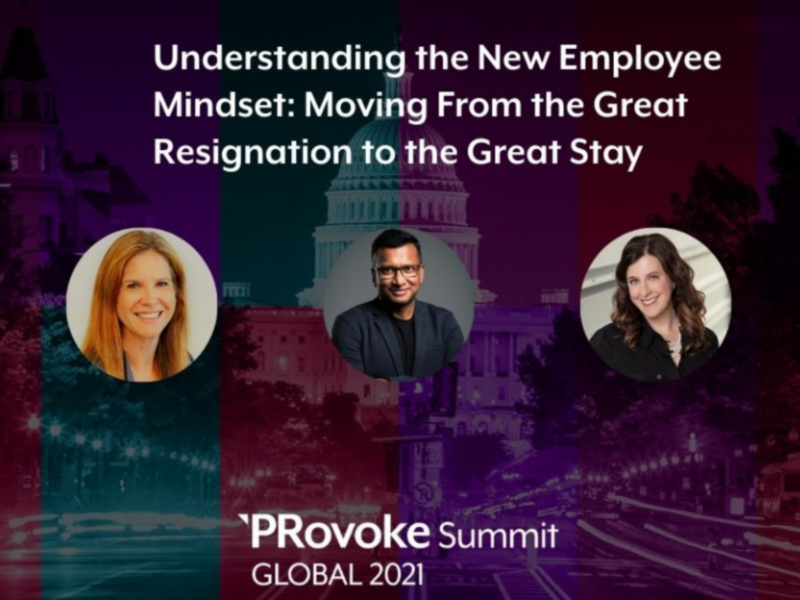 Companies are responding to employees' new expectations through hybrid work models and communications.

“Flexibility has gone from a wish or a preference to an expectation,” said Laura Duda, The Goodyear Tire & Rubber Company’s chief communications officer. “Going back isn’t really an option.”

Duda’s remarks were part of a panel discussion on the new employee mindset — and what it’s going to take for companies to keep them — at the 10th PRovokeGlobal PR Summit Tuesday. Other participants included Lenovo Asia-Pacific executive director of HR Subhankar Roy Chowdhury and Anne DeAngelis, executive VP of employee engagement strategy at Zeno Group, who moderated the session.

Duda said that for Goodyear — a 123-year-old “buttoned-up company” — the idea of having a remote workforce (excluding most of its employees who work in manufacturing) wouldn’t be on the cards were it not for last year’s Covid shutdown, which forced Goodyear to go virtual over the course of a weekend.

Today, employees are working under an array of hybrid models depending on local conditions, she said. In Akron, Ohio, for instance, staff is required to be in the office two days a week. And Duda said she believes “things are going well.”

But a host of concerns remain, Duda said. “How will we fully connect new associates to our long-standing culture? Will our culture start to degrade in ways we can’t really see? Will we continue to innovate when we’re not having hallway run-ins?”

Subhankar said he, too, has seen a fundamental switch in employee expectations since Lenovo’s move last year to working in “what was previously a seemingly impossible" virtual environment.

"Three things have changed in terms of employee expectations: workforce flexibility is becoming a norm rather than an exception; wellbeing is a strategic lever to attract and retain talent; and internal adoption of technology and new tools," he said.

Subhankar said Lenovo has responded to those changes regionally on a case-by-case basis, given how differently countries across Asia-Pacific operate. Japan, for instance, had no history of working remotely, whereas employees in India had done so for several years making for “a smoother transition.”

“We are taking it one step at a time, but we will evolve as a company,” he said.

Subhankar credited efforts such as focusing on innovation and keeping leadership and staff connected virtually with Lenovo maintaining its progress as it transforms from a device company to a services and solutions company.

“Is this going to replicate face-to-face meetings? My answer is no. But we are going to keep doing this,” he said.

Duda said Goodyear, too, has changed tactics for keeping employees connected through technology, some of which involved changing mindset as well.

“We’re a buttoned-up company but we’ve really shifted how we approach things. We’ve gone from highly prepared, high production quality internal events to more frequent, informal events with more opportunity for engagement,” Duda said. “We’ve substituted a preference for timeliness and authenticity for perfection. In feedback from employees we’re seeing it’s a good shift, and it’s enabling us to be more connected.”