Please refer to our Privacy Policy for important information on the use of cookies. By continuing to use this website, you agree to this.
Home Latest PRovokeGlobal: Identifying Issues Before Sparks Turn Into Flames 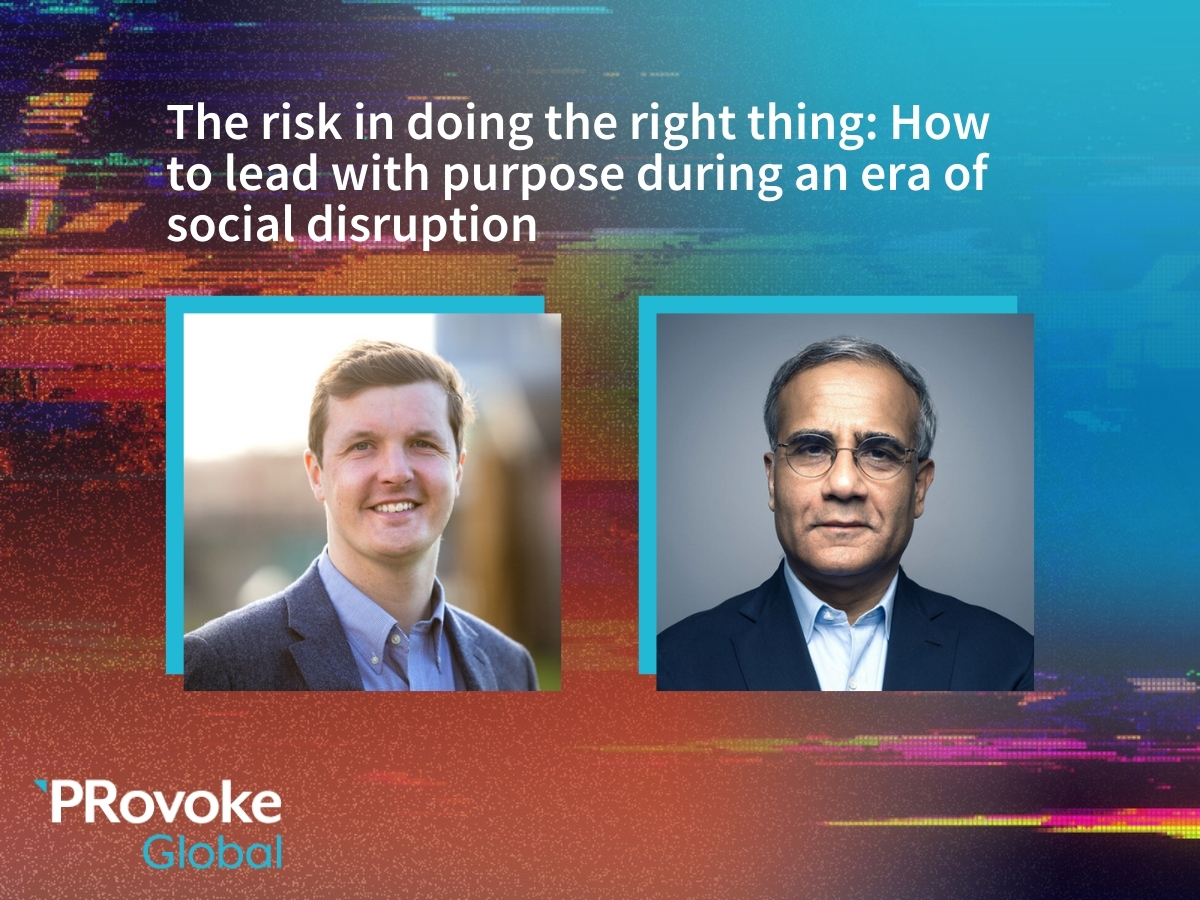 Technology needs to combine with good old-fashioned wisdom and judgment to help companies navigate a climate of social disruption and anticipate social media crises, attendees at day one of PRovokeGlobal heard today.

In a session called “The Risk in Doing the Right Thing. How to Lead With Purpose During an Era of Social Disruption,” Adam Hildreth, founder and CEO of early-warning risk intelligence firm Crisp, and Rishad Tobaccowala – author of “Restoring the Soul of Business: Staying Human in the Age of Data” and a senior advisor to Publicis, where he was previously chief strategist and chief growth officer – discussed the unique challenges facing companies today, and ways in which smart communicators can harness technology to help them manage in that environment.

“We were already living in a highly transformative world and then we had the mother of all crisis,” said Tobaccowala. “Covid-19 is social crisis, an economic crisis, a health crisis and a political crisis. At the same time, we had movements, like Black Lives Matter and MeToo and Brexit, in almost every country around the world.

“And we had social media: available to everybody and capable of enormous amount of good, but it can also be weaponized for a tremendous amount of bad. What I have seen is that something that allowed you to share what you were eating first became an amazing marketing medium and then became a political marketing medium and then became a way to influence people. Which made it a business medium far beyond marketing.

“All of this was happening at a time when companies are realizing the importance of purpose and acting on that. In the past, we were told that we should not take a stand and we should not piss off people, and we understood that there is a risk in doing the right thing because you get backlash at scale in an age of global social media.”

He urged companies to think about ESG—traditionally defined as environmental, social, and governance issues—in a different way: as employees, society and government. “I think one of the things that drove corporate engagement with the Black Lives Matter movement is that a lot of employees went to management and urged them to take a stance.”

But the rise of global social media, Tobaccowala said, has made it clear that “if information reaches people at scale it doesn’t matter whether it’s truth or untruth,” which means that companies need to monitor what is being said, and evaluate conversations not on the basis of whether it has any basis in fact, but whether it will spread.

Added Hildreth: “We consume fake news at a higher rate that factual news because fake news is more interesting…. We have learned that it is not the content that matters. It’s the person who creates the content and their motive in creating the content. That’s essential to understanding a particular narrative and to understand how it is going to be shared.”

That understanding, Tobaccowala said, requires head and heart, or as he puts it, “Successful companies combine the story and the spreadsheet. The story is the people and the culture and today the spreadsheet is the technology. The tech can’t make the principal decisions. It can help you learn and monitor and manage, but it can’t make the decisions for you.

Hildreth said: “Technology can’t do anything without human wisdom and judgment. Our view is that we need technology to join the dots between a piece of content, who created it and who they influence. But technology doesn’t teach humans; humans teach technology.”