Please refer to our Privacy Policy for important information on the use of cookies. By continuing to use this website, you agree to this.
Home Latest PRovokeGlobal: “Tech Is Expected To Fix Society And Blamed For Disparity And Polarization At The Same Time" 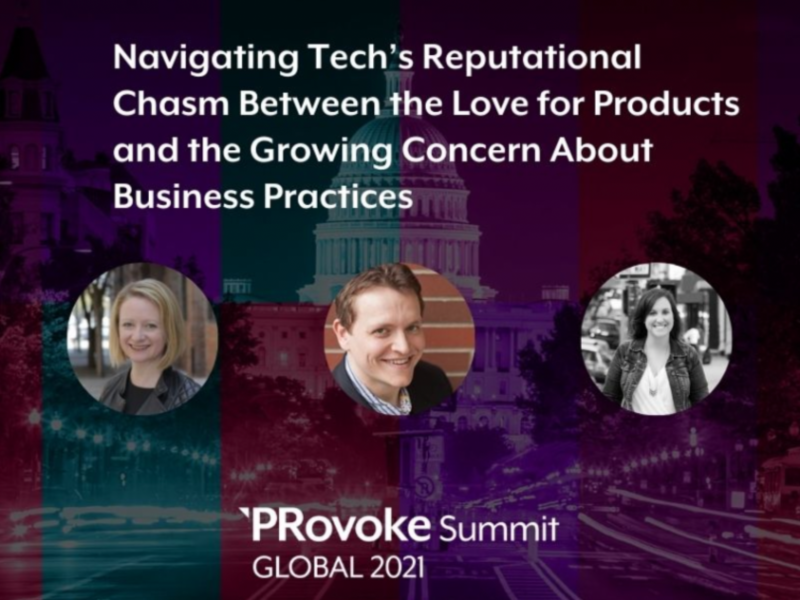 PRovokeGlobal: “Tech Is Expected To Fix Society And Blamed For Disparity And Polarization At The Same Time"

Experts from Ketchum, Hotwire and WE explored the causes of the growing divide between consumers' love of technology and concerns about the companies that make it at the 10th PRovokeGlobal PR Summit.

The heightened ambiguity of consumers’ relationships with technology was fueled by the Covid pandemic, during which users became simultaneously reliant on and overwrought with the machinery, industry experts say.

“Tech has been brought into every aspect of our lives, and lines have been blurred,” said Hotwire North America co-president Heather Craft. “Consumers may have been able to dictate the tech that came into their homes before the pandemic, and then they couldn’t do that anymore.”

Craft’s comments were part of a far-reaching discussion on the growing chasm between consumers’ love of products and concerns about tech companies’ business practices at the 10th PRovokeGlobal PR Summit Wednesday. Participants also included Mark Martin, WE Communications’ executive VP of technology, and Ketchum partner and tech industry managing director Lisa Sullivan, who moderated the discussion.

The conversation was prompted in part by Ketchum’s 2021 Social Permission and Technology study, which found the perceived impact of technology during Covid was both good and bad, “with increased use of technology walking the tightrope between making peoples’ lives better but also fueling technology fatigue and burnout.”

“The research we have done shows that people love what tech has allowed them to do, but the relationship and perception of the companies that empower that is much more complex,” Sullivan said. “We’re seeing tech burnout and tech intrusion. There was already a growing gap between our love of tech and our distrust of tech as an industry, and the pandemic exacerbated that.”

“In some ways the industry’s reputation suffered during this time,” Sullivan said. “Tech is expected to fix society and blamed for disparity and polarization at the same time.”

All of which means tech companies, including their top executives, need to step up to improve relationships with internal and external stakeholders, speakers said.

“We want to ‘tech our way out’ of challenges in the market, but we also don’t like that dependency, and it requires companies to have more authentic engagement and communication to address that,” Martin said.

Martin said there are a range of nuances required for tech companies to foster kinds of engagement, starting with brands having “to reach some peace” with realizing they’re not going to appease everyone they engage with. “You must be true and authentic but its those communities, employees and customers that matter most to you and that are core to you as a brand and where you want to go,” he said.

And no tech category is immune from having to do so, he said. “That need for courageous communications and principled position cuts across all brands,” he said.

Panelists stressed the importance of internal communications, particularly given the demand for tech specialists in the industry and beyond, as well as relationships with the press.

“Tech brands have to turn up for internal stakeholders and customers in an authentic way, and the same is true for media — anything that shows up in one conversation, has to show up in another,” Craft said.

“As communicators our job is to sit across the table or Zoom screen from executives and hold them accountable,” she said.