Please refer to our Privacy Policy for important information on the use of cookies. By continuing to use this website, you agree to this.
Home Latest PRSummit: 'We Believe In Trying To Make News' Says Chuck Porter 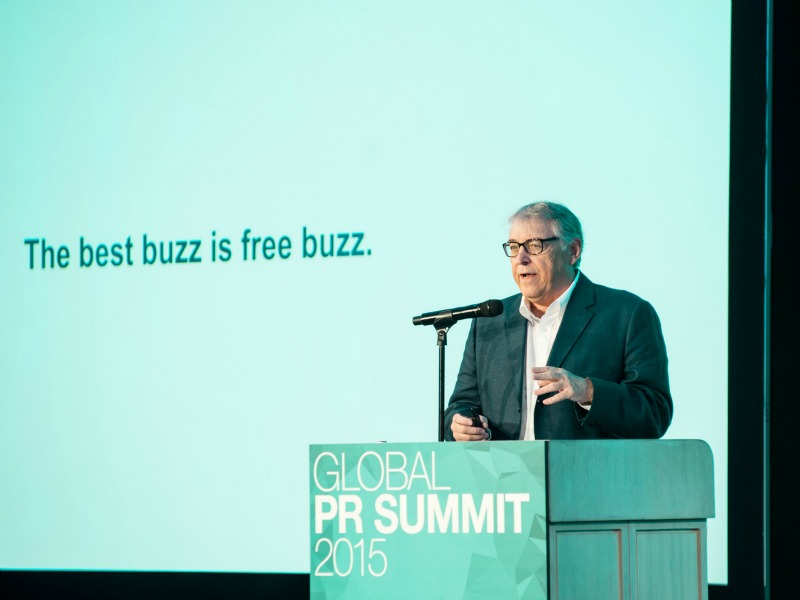 Making the case that "the war is over, PR won", the Crispin Porter + Bogusky chief showcased how his agency's best work is underpinned by PR thinking.

MIAMI—For many years, award-winning ad agency Crispin Porter has been trying to think “more like a PR agency than a traditional ad agency” in order to create campaigns that generate buzz and engage with consumers, according to founder and chairman Chuck Porter, speaking at the fourth annual Global Public Relations Summit today.

Making the case that “the war is over, PR won”—a title he said he wrote on a bar napkin—Porter took the audience through a show-reel of some of the firm’s greatest hits, almost all of which were underpinned by PR thinking.

Among the lessons Porter imparted to the audience:
·        “Popular culture is the currency for kids. They need to know that to deal with their peers.” So his agency has harnessed popular culture—creating an anti-tobacco ad that looks like a movie trailer (for a conspiracy thriller about a product that was killing millions of Americans), so much so that many people who saw it in movie theaters called to find out when the movie was opening.
·        Audiences get bored. “One big problem with PR and ad campaigns is we keep saying the same thing over and over again. We have always learned that repetition is how you drive something open. We learned that the unexpected is much more powerful.”
·        “We learned to use old media in new ways.” For client Molson, for example, the company realized that running television advertising would not work, that the company would always be outspent by larger rivals. So the firm ran amusing print ads that drew requests for reprints, and then created fake magazines (with ads running on the back cover of real magazines) to help male drinkers appeal to women.
·        “We realized the best buzz came from non-paid media.” Introducing the Mini Cooper in the US, the agency placed cars on top of SUVs and drove them around. “The client drove along with us, and by the end they said, ‘We don’t know how to measure this but everywhere we went people took pictures of us.’ The agency also created a direct response ad campaign around a fake website (www.counterfeitmini.com) to help consumers spot “fake Minis.”
·        “We believe in trying to make news. People are interested in news; they are not interested in advertising. We have never started with advertising. We have always started with a different kind of idea. Sometimes it’s a press release. We draft a lot of hypothetical press releases and see what’s news. One of the agency’s most famous campaigns for Burger King started with a press release that asked: “What If We Stopped Selling Whoppers?”
·        Find a trend and claim it. Crispin Porter has 40 people “who just follow trends.” One trend the agency capitalized on: Netflix consumers who “watching ahead,” even when they had promised to watch a show with their husband or wife. The agency dubbed this “Netlfix adultery”—a trend that generated heavy earned media coverage.

Asked for advice for public relations agencies looking to compete in this environment, Porter said: “One key for us is we have gotten closer and closer to our clients at the top. It’s difficult to sell risky ideas unless you have the relationships at the top. To do that we spend a lot of time discovering a business problem we can solve and then solving those problems.”