Please refer to our Privacy Policy for important information on the use of cookies. By continuing to use this website, you agree to this.
Home Latest PRSummit: Failure Is Not An Outcome; It’s The Refusal To Try 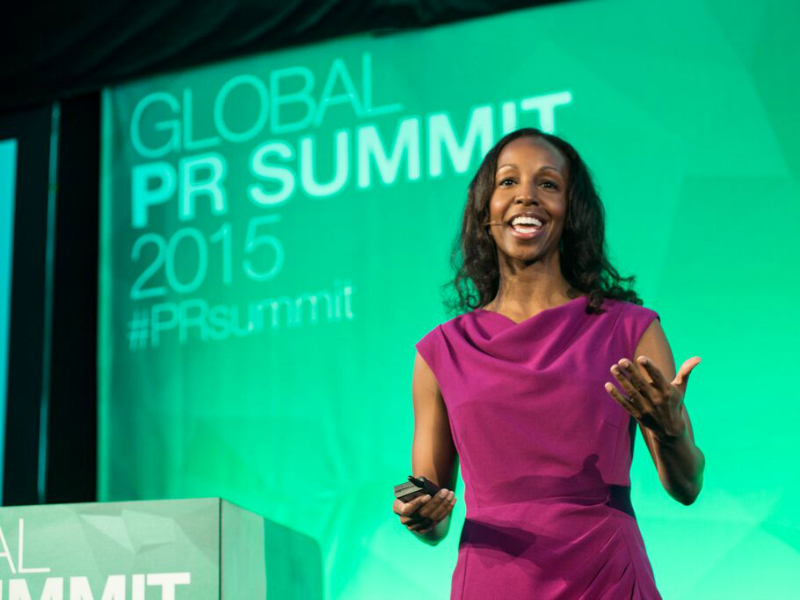 PRSummit: Failure Is Not An Outcome; It’s The Refusal To Try

Lewis, assistant professor of history of art and architecture and African and African American studies at Harvard University and author of The Rise: Creativity, the Gift of Failure, and the Search for Mastery, was speaking at a plenary session sponsored by Ketchum, during which she urged the PR people in the room to use their failures as an incentive to creative triumph

"For the last five to 10 years I have been looking at explorers, entrepreneurs, artists, athletes," said Lewis. "And I came to realize that what we celebrate about their achievements is often based on a near-win catalyst that gave them a motivation that propelled them to greater heights."

She quoted successes in a variety of fields, from Duke Ellington (“I took the energy it takes to pout and wrote some music”) to Thomas Edison (“I have not failed; I have just found 10,000 ways that don’t work”) to make the case that “extraordinary people often come from a foundation of frustration; they excel in how they deal with failure.”

Yet often, she said, “when we communicate the rise of a creative icon, we leave out this part of the process.” And it can be particularly difficult to talk about failure in the corporate context, despite the rise of events like FailCon, which brings together entrepreneurs to talk about the inspirational potential of failure.

We need to realize, she said, that “Failure is not an outcome; it’s the refusal to try.” And we need to understand the difference between blameworthy failure—which results from inattention of the deviation from safety protocols in a high-risk environment—and praiseworthy failure, which is the result of exploratory testing, or the willingness to try new ideas in a changing industry.

One key, she said, was understanding the difference between “success” and “mastery.”

"Success is what we all want," she said. "It’s meeting a goal once and stopping there. Mastery is a long-term constant journey." She cited her experience watching women archers on the varsity team at Columbia and their struggles: “I stayed for hours, I stood behind one of them hit a seven, a nine, an eight and a 10, and then miss the target…. Mastery doesn’t come from being happy you hit the 10, but having the drive to hit it again and again and again. For these women, coming just shy of your goal gives you even more tenacity.”

In that way, the near-win “gives us a sense of frustration that allows us to focus on what we can do right now to achieve mastery. But it can be frustrating. So how does a near-win become a propulsion? How do masters remain inspired?”

One key, she says, is creating a space “in which you can be a deliberate amateur.” This approach allowed Russian physicists Andre Geim to become the first person to win both an IgNobel Prize (for using magnets to levitate a frog) and a Nobel Prize (with colleague Konstantin Novoselov, for research that led to the discovery of the strongest, most conductive material in the world.

Gein instituted a series of “Friday night experiments,” which allowed him to “ask questions that experts wouldn’t dare,” which led to the Nobel Prize winning discovery. Similarly, Mayo Clinic, seeking greater innovation, introduced its own “Queasy Eagle” award for research that didn’t really “take flight” but led to new ideas—and resulting in an exponential increase in the number of patents.

Equally important, Lewis said, is the ability to work in private rather than making all your ideas immediately public—a potential flaw in the group brainstorming session.

Working in private can help people develop ideas that are genuinely iconoclastic because of the “Asch effect,” a discover of Polish psychologist Solomon Asch, who found that in many circumstances people would rather give a clearly wrong answer that others in a group agreed with, rather than an obviously correct answer that appeared “iconoclastic.”

In Hollywood, for example, award-winning films like Juno, Slumdog Millionaire, and The King’s Speech only made it to the screen because of a private document called a The Blacklist—an annual survey of the "most liked" motion picture screenplays not yet produced. Many of those films had languished for years because the people who read them thought they would not resonate with others.

In the realm of stand-up comedy, meanwhile, comedian Chris Rock has complained that it is difficult to develop new ideas and new routines because smaller comedy clubs—where comics would test ideas in front of a small audience—often include people with cell phones who will broadcast routines in the testing stage to a broader audience.

In a corporate setting, Lewis warned that even smart counselors might suppress ideas that organizations need to hear because they fear going against the consensus. She cited one CEO she knows who will often ask whether everyone agrees with a particular idea. “And then he will postpone implementation of ideas that everyone agrees with until there is enough dissent to be sure it’s the right idea.”

Said Lewis: “Privacy is a timeless feature of the creative process. But we need to create private time we need to summon the bravery to stand up for an unusual iconoclastic idea.”