Please refer to our Privacy Policy for important information on the use of cookies. By continuing to use this website, you agree to this.
Home Latest PRSummit: Melissa Waggener Zorkin On Prioritizing Purpose Over Profits 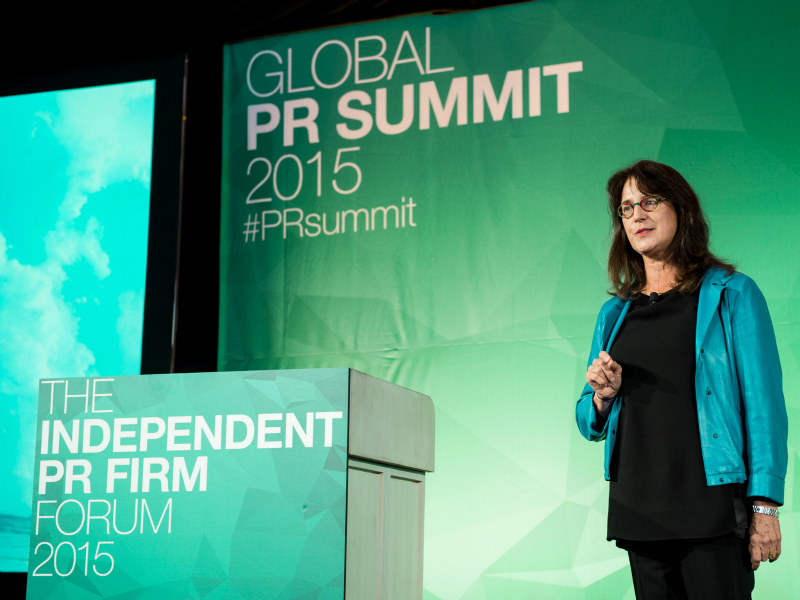 Zorkin — whose firm recently underwent a major overhaul — talked about the lessons she's learned in more than three decades of 'fierce' independence.

MIAMI BEACH, FL — WE co-founder and CEO Melissa Waggener Zorkin said while she’s entertained every offer to sell her $100m PR agency, she’s never wavered on maintaining independence at the Independent Public Relations Forum on the first day of the Global PR Summit.

“I’ve been flattered by many offers — and I entertain everyone because I learn so much,” Zorkin said during a Q&A with the Holmes Report CEO Paul Holmes. “But I’ve never wavered on selling."

Zorkin's firm recently underwent a rebrand from an eponymous firm — Waggener-Edstrom — to WE. Holmes asked how Zorkin maintains the WE culture while also allowing its offices across North America, Asia-Pacific, EMEA and South Africa to retain the nuances of the local market.

“My job is to make sure there is a central perspective,” Zorkin explained. “My job is not to micromanage the organizations in every region.”

She pointed out the firm’s four focus areas: technology, healthcare, consumer and social innovation (defined by deploying technology as an enabler of change).

“To know what you do best is a gift,” she noted, while also conceding that WE has struggled to identify the right balance between wholly-owned offices and forming collaborative partnerships in various markets.

“I don’t think we’ve always gotten this right,” she noted. “That said, we are more deliberate and disciplined about this now.”

The comments were part of a presentation in which Zorkin drew upon a surf analogy to explain the sometimes turbulent evolution of her PR firm.

“We are the daredevils who are drawn to the 'impact zone'—the most dangerous part of a wave where a surfer can receive the worst beating, but also glide victoriously towards the beach after a stellar ride,” Zorkin, an avid surfer, said. “That is after all, part of the allure of being independent isn’t it?”

She referred to the 2008 economic meltdown as “the widow maker” and dealing with “shark-infested waters” when competing for business. She described the challenges that independents face: Owning a POV and standing apart from everyone else; investing ahead of the curve;  and winning more "than our fair share of business."

She described five lessons that she’s learned about surviving the "impact zone" in more than 30 years of owning a PR firm.

Lesson 1: Burn down your house

“We ‘burned down our house’ by taking down our name from our agency,” Zorkin said. “The agency is now simply called WE.  This change is a reflection of what WE has always been. Because it’s never been about me, or my partner Pam Edstrom, or any one individual. WE is about us. It’s the power and insight that comes from the collective.”

She shared a proverb that she heard when she encountered a personal tragedy of her home burning down many years ago: “Since my house burned down, I now own a better view of the rising moon.”

“It took me many years to learn that it can’t be people at all cost, but people at the right cost,” Zorkin explaining, pointing out that WE alumni now work across Fortune 500 companies: Amazon, Starbucks, Amazon, T-Mobile, GE  and Nike, among others. “Instead of bemoaning the loss of talent or stressing over asking smart, talented people to leave, I think to myself: Would it really be so bad if some of my smartest people end up in other organizations?”

Lesson 3: Take the down the paper

As the agency grew, management had to instill more business rigor as the decisions became more and more complex — often resulting in closed-door meetings removed from the rest of the organization.

“The pinnacle moment was a strategy session where we were behind closed doors and I looked over to the glass window and saw brown butcher paper covering all the windows,” Zorkin said. “I guess it wasn’t enough to close the door, and sequester ourselves but our dealings were so secret we needed brown paper on the glass too? No wonder our employees thought we weren’t being transparent.  No wonder they didn’t feel like they had a voice. I got up mid-sentence and ripped the paper off the door.”

Lesson 4: Build the epic — not just the episode

“For us, what that means is staying true to our epic, our end game, our purpose,” Zorkin said. “And making decisions on a daily basis that lead you to that outcome.  For me, that is prioritizing purpose over profits… That is my long game.”

She added, as an independent, “we have the ability to remain steadfast to our purpose instead of being swayed solely by the demand for billable hours and profit.”

Lesson 5: Be the gift

“Recently, I took my name off the door at Waggener Edstrom,” Zorkin said. “The agency is now simply called WE...It’s the power and insight that comes from the collective.”