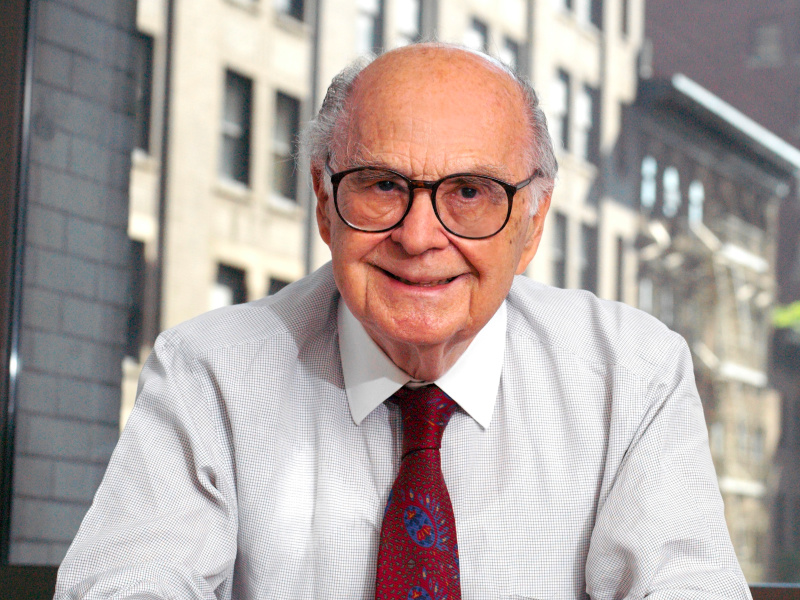 The co-founder of Burson-Marsteller is credited with transforming PR into a global industry.

NEW YORK — Harold Burson, a major force in PR becoming the global  industry it is today, has died, aged 98.

Burson, who co-launched Burson-Marsteller in 1953 after running his own five-person firm, is credited with ushering in the era of integrated marketing — a strategy that grew the agency into the world’s largest PR firm, 30 years after its founding. He was so devoted to the practice of PR that he worked well into his 90s, long after stepping down as CEO in 1988.

In 2018, WPP — which by then had owned Burson-Marsteller for nearly two decades —merged the firm with Cohn & Wolfe to create the third largest PR firm in the world with Burson Cohn & Wolfe.

“Our industry has always drawn its strength from the great people within it, and Harold was one of the greatest," WPP CEO Mark Read said. “He was ahead of his time in so many ways; in our business, if you think you’ve come up with a new idea, there’s a good chance Harold put it into practice 50 years ago. He saw the potential for public relations to be a global enterprise, and he did more than anyone to professionalise the discipline.

“After he stepped down as CEO, Harold continued to be an engaged and inspirational presence within the firm that carries his name, and in WPP as a whole. He was among the first people I called after becoming CEO of WPP, and he was a generous source of encouragement and support. It was a privilege to know him, and his family and friends have our deepest condolences," Read said.

WPP founder Sir Martin Sorrell praised Burson for being a "wonderful gentleman and the quintessential practitioner, who embraced change and continuously learned and adapted to new technologies, even in an age of digital disruption.

"He saw around the corners before most. A wonderful, unobtrusive mentor to all those who would listen. Invaluable to me in my time with him from 2000 to 2018. There never has been, there is not and there never will be his equal in the area of public relations," Sorrell said.

Burson was known as a fierce proponent of the role of business in society and the idea that businesses should treat employees, customers and suppliers fairly and support communities, but with the understanding that the principal objective of a corporation was to make a profit.

Born in 1921 in Memphis, Burson took his first PR job at an engineering firm six months after graduating from the University of Mississippi. Two years after enlisting in the US Army in 1943, he was transferred to the news staff of the American Forces Network, a month before the second world war ended in Europe.

Burson covered the Nuremberg Trial and was the only reporter to obtain an interview during the trial with Associate Justice Robert H. Jackson, the chief American prosecutor, after arguing that his audience – American GIs who fought in the war – were entitled to hear the story first-hand.

In 1946, Burson opened a public relations firm in New York in “a tiny nook in a client’s office” next to the desk of a part-time executive assistant. Never having heard the word “differentiation” used in a competitive sense, he described his firm as specializing in business-to-business clients. Early clients included by Rockwell Manufacturing Company, which built the first helicopter to be used for executive travel.

Burson met William Marsteller through a friend in 1952, and they worked together on projects before making the relationship official with the creation of Burson-Marsteller a year later.

Over the years, Burson cited two “defining moments” that accounted for the company’s rapid growth. The first was the creation of the European Common Market in the late 1950s. Burson-Marsteller was only the second PR firm to establish an office in Europe — in Geneva in early 1961 — and announced its intention to become a global operation over the next quarter century. During the 1960s, its annual revenues multiplied tenfold, to $4.4 million.

The firm’s second defining moment was its selection in 1970 by General Motors to be its sole public relations counsel, a response to allegations that GM hired private investigators to follow the public watchdog, Ralph Nader, after his scathing book questioning the safety of GM’s much-touted Chevrolet Corvair.

One of the firm’s specialties was crisis management, including the major Tylenol recalls in 1982 and 1985 – often referred to as models for corporate management in times of crisis – as well as the reintroduction of Coca-Cola Classic in 1985 after the “New Coke” debacle, an undertaking in which Burson was a key participant.

Burson summarised the exercise thus: “[w]e got a hole-in-one after the ball hit the tree.” The firm also represented Union Carbide in the aftermath of the discharge of toxic chemicals at its plant in Bhopal, India; Pan Am Airways after the Lockerbie crash in Scotland; and Dow Corning following the US Food and Drug Administration’s decision to ban silicone breast implants. Burson-Marsteller also had a long-term role in representing the Olympic Games and its corporate sponsors.

Burson was widely lauded within the PR industry and was active in numerous public service organizations, principally the John F. Kennedy Center for the Performing Arts. As a board member of Kennedy Center Productions, he negotiated Japan’s $3 million bicentennial gift in 1976 to construct the Terrace Theater. He was also instrumental in establishing the Kennedy Center Corporate Fund in 1977.

He was married to Bette Foster Burson for one month short of 63 years. Burson is survived by two sons and daughters-in-law, Scott and Wendy, and Mark and Ellen, and five grandchildren.