Please refer to our Privacy Policy for important information on the use of cookies. By continuing to use this website, you agree to this.
Home Latest Study: Thorough Agency Searches Lead To Better Outcomes 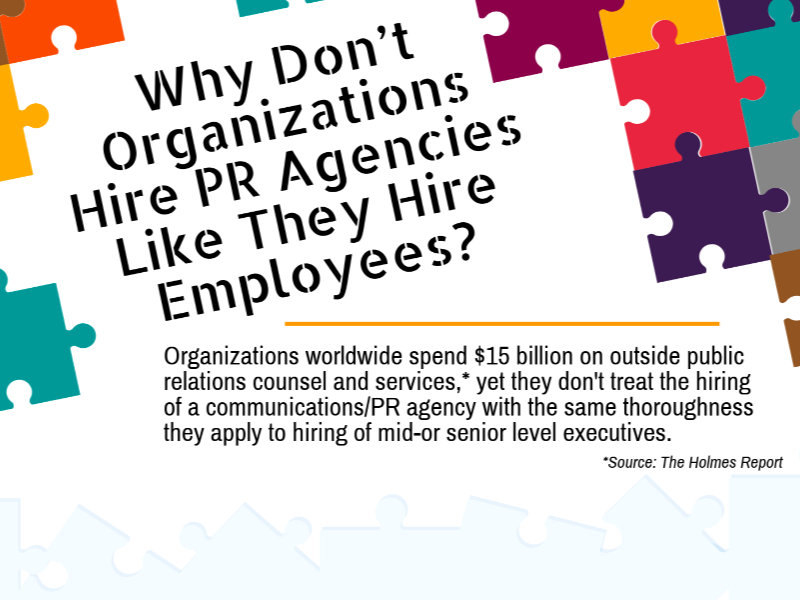 A report from the Institute of Public Relations and RFP Associates shows 35% of companies are not satisfied with their primary PR agency partners.

NEW YORK — Big companies spend roughly $15 billion  a year on external PR counsel, yet more than a third of their chief communicators aren’t satisfied with their agencies — and even those that are largely content have their share of gripes.

That, at least, is according to new research from the Institute for Public Relations and RFP Associates on big businesses’ agency selection processes — and their impact on the relationships, work and outcomes that ensue.

The study, on which CommunicationsMatch and Researchscape also partnered, found that, by and large, chief communications officers don’t put the same time and attention into finding a PR agency as they do into a search for an employee.

Fewer than 15% of the 89 senior communicators that participated in the survey said they use external resources to identify agencies, and 65% start their search with only two to five firms. Less than half, or 40%, of them check agency references.

All of which has an impact on the quality and longevity of their PR agency partnerships, as the study found a clear correlation between the thoroughness of an agency search and how well things ultimately pan out.

On the other hand, 65% said they are “very” or “completely” satisfied with their primary agency — though even those relationships are fraught. Respondents were less satisfied with particular components of their agencies’ performance surrounding proactivity, account coordination, quality, staff turnover and meeting objectives, budget expectations and deadlines.

The study also found that the more content companies are with their PR agencies, the more likely they are to keep them. 30% of respondents had worked with the same agency for more than four years; 30% for three to four years; 27% for one to two years; and 14% for less than a year.

Those sorts of results, the study said, show that it behooves companies to step up their game when it comes to hiring an agency, as it will positively impact everything from the day-to-day works of the partnership to the outcomes of the work they produce.

Starting with a bigger pool of candidates and using RFPs in searches are among the best practices from which companies can benefit. So are rating agencies fairly using a balanced scorecard and using resources from online databases to agency search experts as guidance, the report said.