Please refer to our Privacy Policy for important information on the use of cookies. By continuing to use this website, you agree to this.
Home Latest The Economist's Zanny Minton Beddoes: "It’s Really Hard To Manufacture Authenticity" 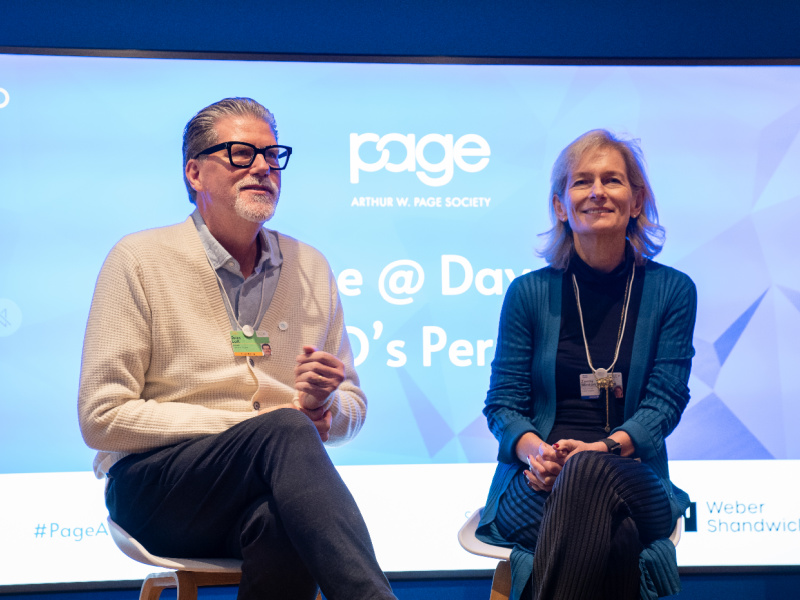 At a Page Society event in Davos, Zanny Minton Beddoes called for more authenticity from corporates, while also questioning the rise of ESG as a marketing slogan.

In just half an hour, the conversation touched on a host of pertinent topics for the industry — AI, stakeholder activism, ESG, employee comms and CEOs, to name a few.

Yet, time and again, the conversation turned to the importance of being authentic. The authenticity and passion Ukrainian First Lady Olena Zelenska exuded at Davos had an audience “spellbound,” she said.

“Because you’re understandably concerned about protecting a brand, there is a temptation to hide behind platitudes,” Minton Beddoes said. “But I think it really raises the stakes.”

Being genuine and honest, particularly in direct response to stakeholders, is the far better option, she said. But doing that requires communicators to believe in the organizations they represent. “It’s really, really hard to do your job if you don’t believe in the mission or culture,” she said.

One area where Minton Beddoes questions companies' authenticity is ESG.

She also said it is unrealistic to expect CEOs to speak out on issues across-the-board, even as expectations for them to act as leaders on societal issues are on the rise. “I think it’s a different calculus for different companies. And I don’t think every CEO should espouse on every social issue,” she said. “You stand up for what you believe in.”

All of which are challenges for communicators as they face a host of unknowns — changing media consumption habits, polarization and geopolitical issues, for instance.

Minton Beddoes was optimistic when it comes to the growth of new media channels (“We need to be able to work out what our core advantage is. But then we need to meet and greet our viewers, readers, our listeners when and where they want.”) and AI (“I think it will be a really powerful tool for us and for you.").

With that, however, she acknowledged that communicators will be navigating a world in the throes of change post-Davos, with the certainty of new challenges for business and stakeholders. Minton Beddoes expects, with deglobalization, to see “much more” government intervention, supply chain issues and inflation, particularly if China experiences fast growth.

“We are in a world that is not going back to the kind of globalization of yore,” she said.