Please refer to our Privacy Policy for important information on the use of cookies. By continuing to use this website, you agree to this.
Home Latest The Future of Techlash: 'Sentiment is Becoming More Fragmented'

The Future of Techlash: 'Sentiment is Becoming More Fragmented'

There's a dizzying storm around techlash, but one thing is clear: the crises we’re in are no longer acute, there’s no end date.

Like so much in 2020, techlash has unraveled into many threads, each snowballing with varying degrees of momentum and velocity. The Social Dilemma, disinformation, the presidential election, privacy, antitrust, the pandemic, regulatory questions, China-US relations, #BlackLivesMatter, #MeToo are just some of these threads. And while there is this storm of issues around techlash, one thing is clear: the crises we’re in at the moment are no longer acute, there’s no end date.

This challenges conventional wisdom around crisis communications. Strategic communicators are operating in a constant state of heightened awareness to reflect the world we’re living in. The chaos that pounds our daily lives right now has made companies that might prefer sidelines, step onto the court. For instance, #BlackLivesMatter has pushed many companies to acknowledge racial inequities at their own organizations and beyond. And now Microsoft, among those companies, is facing ire from the Trump administration.

"Techlash sentiment is becoming more fragmented," says Robin Kim, global head of Ruder Finn’s tech & innovation practice. "The stakes are also higher, in part because of how fast technology scales and impacts people, as well as how news travels and becomes politicized."

Even so, the stock performance of tech companies is at an all-time high. And “tech’s influence is also expected to grow in the coming years, particularly in a post-pandemic world altered by an acceleration toward automation and tech-enabled services,” says Kim.

But are some companies using this ultra-politicized moment to bow out and avoid facing any confrontation? Just last week Coinbase, a billion-dollar cryptocurrency exchange, announced the organization would be “apolitical” in response to demands that companies should engage in social issues. (CEO Brian Armstrong acknowledged the company has faced “challenges here, including employee walkouts.")

“We have people with many different backgrounds and viewpoints at Coinbase, and even if we all agree that something is a problem, we may not agree on how to actually go solve it,” Armstrong says in a blog post, “Coinbase is A Mission Focused Company.” “This is where there is a blurry line between moral statements and politics. We could use our work day debating what to do about various unrelated challenges in the world, but that would not be in service of the company or our own interests as employees and shareholders.”

On the back of the blog post, Coinbase offered severance packages to those employees who didn't agree with the policy. Some applauded Armstrong for disentangling the company from the unrelenting barrage of issues that companies are being asked to take stand on. Others sounded alarms that Armstrong’s vision is dangerous to advancing diversity and equity, especially for marginalized groups — and several of the comments were snarky, mocking the privilege embedded in taking an apolitical stance. The statement rattled the tech sector enough that Coinbase was trending in California for a period on September 28 with several high-profile commenters.


Box CEO Aaron Levie rejected Armstrong’s point-of-view: “An alternative take on the importance of companies taking a stand on critical social issues that impact our employees and communities: when there's a vacuum of leadership from the government in dealing with these topics, businesses often need to lead more than ever."

Director of engineering at GitHub and DE&I advocate Erica Joy speculated that internal turmoil around Black Lives Matter prompted the policy. Twitter’s head of research and design chimed in: “I agree that focusing on your mission is important, but to create a monoculture that ignores societal impact is kicking the issue down the road while alienating employees.” Even tech journalist Casey Newton pushed back on Coinbase, among others.

But there were others that say Coinbase is paving a new way for companies to eschew purpose in favor of mission. Y Combinator co-founder Paul Graham predicted, “most successful companies will follow Coinbase's lead. If only because those who don't are less likely to succeed.” Perhaps one outcome of 2020 is realizing the limitations of the private sector in solving social issues and pressure will shift back towards the government?

“I do believe that most companies have taken - and will continue to take - an apolitical stance publicly, I don’t believe they will state it as overtly as Coinbase,” says Shaun J. Fletcher, PhD, assistant communications professor at San José State University. “The expectations of stakeholders are too varied and nuanced to take a completely apolitical stance, especially in today's emotionally-charged socio-political climate...Lumping all ‘external’ issues into a similar category as a justification for political aversion is a mistake, in my opinion. I don't see that being well-received.”

“It’s also hard in reality to draw hard lines on what social issues lie at the core of a company’s mission and which do not,” Ruder Finn’s Kim says. “Leaders need to accept the fact that the days when the workplace was relatively free from politics are over. While Armstrong is right in that no company can succeed in trying to do everything, even singularly focused companies must think about how they do their one thing with greater awareness of the implications – failure to do so is how unintended consequences turn into systematic bias.”


But the issue is bigger than which tech companies are taking a stand on which issue. As Beth Bannerman, chief engagement & sustainability officer at biotech Amyris, puts it: techlash is also about human’s innate sense of fairness. There’s an underlying sense that technology companies are reaping massing benefits without creating enough value to justify those gains.

“People have been sounding the alarm because they understand that Big Tech has more collective economic and social influence than some national governments,” Bannerman says. “Unlike a democracy, where people have tools, like elections, to hold large powerful institutions accountable, people feel powerless when it comes to holding Big Tech accountable. Part of it also comes down the pace of acceleration in technology advances.”

“All current signals point out that the backlash after November 2020 will surpass the one that originated in November 2016 in magnitude,” she warns. “Some politicians and citizens will create total chaos, and tech would be blamed for all of it. The pendulum is drawn to such extreme. So, I don’t expect that the near future will help us reach any middle ground.”

The concept of the middle ground, that we are among pendulum swings, emerged in many interviews for this piece. For instance, we went from fawning stories on founders and the media awestruck by the trajectory of unicorns, to now, tech companies being framed as villains. There's plenty of evidence that tech players squandered the initial good will, but Weiss-Blatt says the picture is more nuanced.

“As you would expect, tech PR professionals think the media pendulum has swung too far in the negative direction,” she says, adding that as investigative tech journalists discovered scandals, others jumped onto the news cycle. But also, tech PR’s “infamous secrecy and limited access heavily contributed to where they are today.”

“We move from hero worship to villainy, but the next phase is to find a balance, most likely through adjustments in design and, possibly, regulation,” says Kim. “Those are the types of conversations we need to drive.”

And those conversation need to happen across multiple threads, as Weiss-Blatt points out, techlash spans the cultural and the political. But one consistency is, the world around us is permanently changed, in particular our relationship with technology. For instance, a recent McKinsey survey of 800 executives asked what work will look like in 2025? The answer: more automation, more remote or hybrid working environments, more AI and machine learning — in short, more technology.

“A year from now, we believe we'll still be feeling the effects of the pandemic in the way we live and work," says Vanessa Yanez, global head of print communications at HP.  "Covid-19 and the recent racial justice movement laid bare the deep-rooted inequality issues that still exist in society today. It is often the times of greatest struggle that serve as catalysts for our greatest progress. We must use our communications tools and levers to address major societal issues and inspire change.” 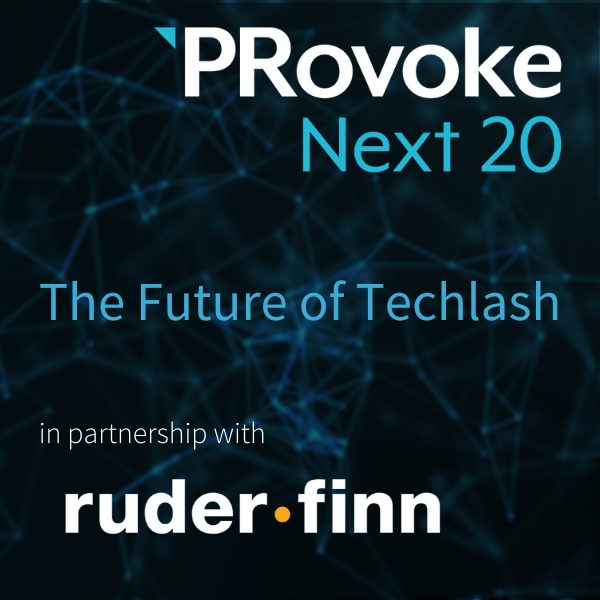