Please refer to our Privacy Policy for important information on the use of cookies. By continuing to use this website, you agree to this.
Home Latest Thomas Kolster: "Purpose Needs To Serve The Many, Not The Few" 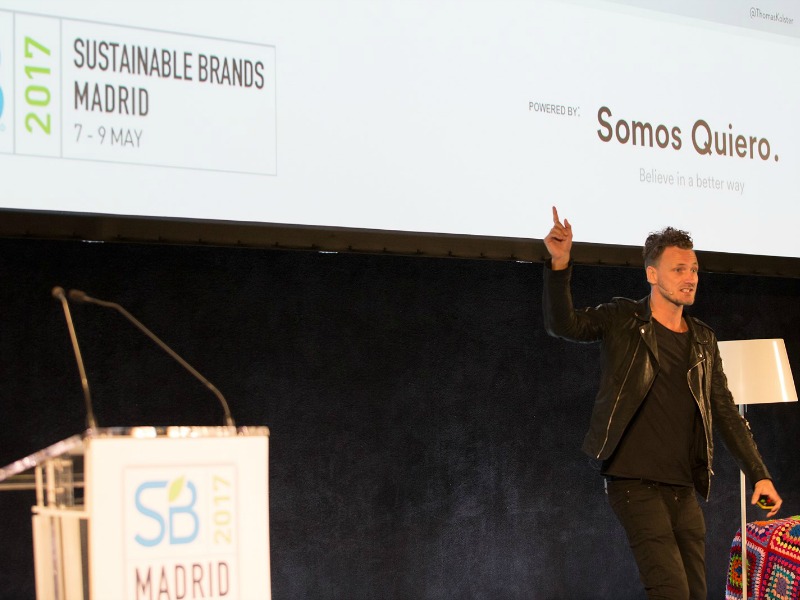 Thomas Kolster: "Purpose Needs To Serve The Many, Not The Few"

Companies seeking to build advertising and marketing strategy around purpose need to ask themselves, “Are we here to create a better future for the few or for the many?”

MADRID—Companies seeking to build advertising and marketing strategy around purpose need to ask themselves, “Are we here to create a better future for the few or for the many?” That was the message delivered by Thomas Kolster, founder of the Danish ad agency Goodvertising and author of a book of the same name, at the Sustainable Brands conference in Madrid.

Kolster was presenting on what he calls “The Two-Headed Purpose Monster,” which he depicted with an illustration of a creature that is half-bull, half-lamb.” On one side we have the bull, who screams ‘profit, profit, profit’ and on the other side we have lamb who says something, something… purpose. That’s the two-headed purpose monster.”

Kolster says that the past few years have seen more and more big brands embracing purpose, but questions the authenticity of some of those efforts. “For most brands, doing good is like pissing in your wetsuit. At first it feels good, it gives you a warm feeling, but after a while it begins to stink.”

Too many companies, he says, “are too focused on sharing all the good they are doing rather than on doing good. Does your brand leave a positive impact, or just a positive impression?”

He says that a lot of companies—he points to Volkswagen as an example—“say good in daylight, but do bad in the darkness of the night” and says companies need to ask themselves, “In a space that is increasingly crowded, how can I be genuine and authentic?”

For big brands, he says, that may be difficult, because the balance of power has shifted to ordinary consumers and ordinary people. “As brands we don’t hold the power any more. Some of the creativity I see from ordinary people today is amazing.”

And some of it is being channeled into entrepreneurialism, as in the case of Marie de la Croix, a 20-something Swedish woman who applied for a job as a barista at Starbucks and—she says—was turned down because of her blue hair. In response, she started her own company, selling coffee from a cart pulled by a bike.

Her company, Wheely’s, launched in 2014 and now operates—via a franchise model—in 45 countries around the world.

Stories like that, Kolster says, is why “purpose is heading is a completely different direction. At local businesses and corner stores, authenticity comes with being on first name terms.”

So what are big companies to do?

As for advertising, Keiler says he just returned from a conference in the US and his conclusion is that the business is facing “an existential crisis.”

“Advertising is driving consumer behavior, driving consumption,” he says. “I talk to people in the business who are asking themselves whether this is really what they want to do with their lives. And now they are facing new competition, from management consultancies like Accenture who are buying up creative firms. It’s going to be interesting over the next five or 10 years to see how the industry can transform itself.”

“It’s like a dinner table conversation: the people you listen to are the people with the most interesting opinions. The same is true of brands. You have to talk about the issues people care about, and you have to be willing to take a position.”