Please refer to our Privacy Policy for important information on the use of cookies. By continuing to use this website, you agree to this.
Home Latest Trust Barometer: Covid-19 Pandemic Gives Rise To New Trust In Government 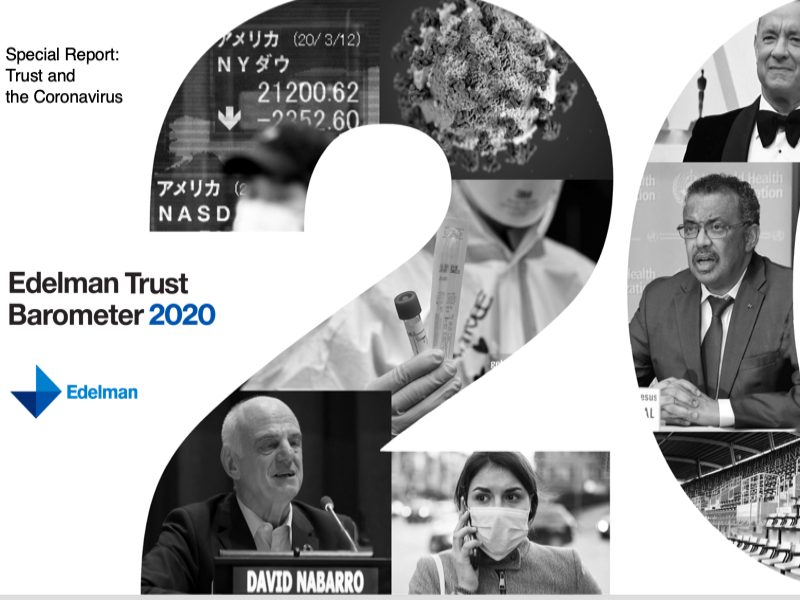 An April Edelman Trust Barometer survey found more people have trust in government than any other institution for the first time since the Barometer launched two decades ago.

NEW YORK — The Covid-19 pandemic has caused a major shift in public sentiment, with the majority of individuals putting more trust in government than any other institution for the first time in 20 years, according to the Edelman Trust Barometer.

A mid-April survey of 13,200 people in 11 countries (Canada, China, France, Germany, India, Japan, Mexico, Saudi Arabia, South Korea, the UK and the US) found trust in government globally is up 11 points to 65%, making it the most trusted institution since the Trust Barometer started two decades ago.

Trust in government leaders has also jumped, rising 13 points to 61%, making them more trusted than CEOs, who are most trusted by 58% of respondents.

“Faced with one of the biggest health and financial crises in history, people are turning to their governments for leadership and hope,” CEO Richard Edelman said in releasing the update. “The speed and scale of the lockdowns, the brave performance of the public health services and the extent of public expenditure to support the private sector have shown government taking quick decisive action. This is a stunning turnaround for government which has always languished at or near the bottom of the trust hierarchy.”

That trust in government translates into people wanting government to lead in all areas of responding to the coronavirus crisis including: containing the pandemic (73%); helping people cope with the pandemic (72%); informing the public (72%); providing economic relief and support (86%); and getting the country back to normal (79%).

A majority of respondents, or 61%, also said they are more willing to give up their personal health and location tracking information to the government than they normally would be in order to help contain the spread of the virus. Nearly three in four feel pandemic-related restrictions on their freedom of movement are now entirely reasonable and appropriate.

Where trust in the federal government is lacking, people are putting more faith in their local government, the study found. The biggest gaps between the two are in the US (20 points), Japan (15 points) and France (11 points).

All of which signals big change from where public sentiment was as recently as March, when 62% of respondents in a similar survey said they didn’t believe their countries would make it through the coronavirus outbreak without brands playing a critical role in addressing challenges created by it. At the time Edelman’s annual Trust Barometer (which is based on responses from 34,000 participants in 28 markets) was released in January, business ranked as the most trusted institution, with 58% of respondents putting more faith in it than in government, NGOs or the media.

Despite a four-point uptick in trust in business to 62% and several high-profile actions taken by companies and CEOs to aid those in need, the study found people still have concerns about how business is managing the pandemic.

Most respondents believe business is either doing poorly, mediocre or completely failing at putting people before profits (50%), implementing safety measures to protect workers and customers (41%) and helping smaller suppliers and business customers stay in business by extending them credit or giving them more time to pay (46%).

Less than one in three respondents, or 29%, believe that CEOs and business leaders are doing an outstanding job meeting the demands placed on them by the pandemic compared to scientists (53%) and national government leaders (47%). National government leaders (53%) and scientists (52%) are also more trusted than CEOs and business leaders (34%) to develop new policies to be better prepared for a future crisis.

“Business has been drafting for the past three months as government has led the first leg of this race,” Edelman said. “Now it’s time for business to sprint to the front of the pack as the focus shifts to reopening the economy. This is a moment of reckoning for business and the promise of a stakeholder approach must now be delivered by filling their supply chains with small businesses and the retaining and reskilling of workers.”

Most respondents said they favor a measured and cautious approach to reopening the economy and businesses. 67% said saving lives should take priority over jobs, and 75% want CEOs to be conservative when getting their companies back to normal operations, even if it means waiting longer to reopen workplaces.

The pandemic has intensified existing perceptions of the system being unfair, fears of job loss and lack of quality information, while adding concern for personal safety. Two-thirds (67 percent) believe that those with less education, less money and fewer resources are being unfairly burdened with most of the suffering, risk of illness, and need to sacrifice due to the pandemic. Nearly one in two worry about job loss due to the pandemic and not being able to find a new one for a very long time.