Please refer to our Privacy Policy for important information on the use of cookies. By continuing to use this website, you agree to this.
Home Longreads 2022 Creativity Study: Diversity Of Talent Emerges As Critical Challenge

The eighth edition of the Creativity In PR study finds that several factors are still hampering industry efforts to recruit and retain diverse creative talent.

While PR firms believe they are doing a good job of holding onto creative talent, more than half of the respondents to the Creativity in PR study think that creatives would still rather work in a different type of agency.

Those are some of the key talent findings from the eighth edition of the Creativity in PR study, which explores the sector's creative evolution as it emerges from the unique challenges of the past two years.

The 2022 Report, co-authored by PRovoke Media and Now Go Create, in partnership with FleishmanHillard, is based on a survey of more than 200 agency and in-house executives from across the world, which took place earlier this year. These results help set the stage for next week's Cannes Lions Festival, at which PR firms will again seek further evidence of their ability to compete with other disciplines in creative terms.

When it comes to creative talent, it seems clear that the events of the past two years are having an impact. 20% of respondents agree that the 'Great Resignation' is stopping people from joining their agency, as working priorities change post-Covid. 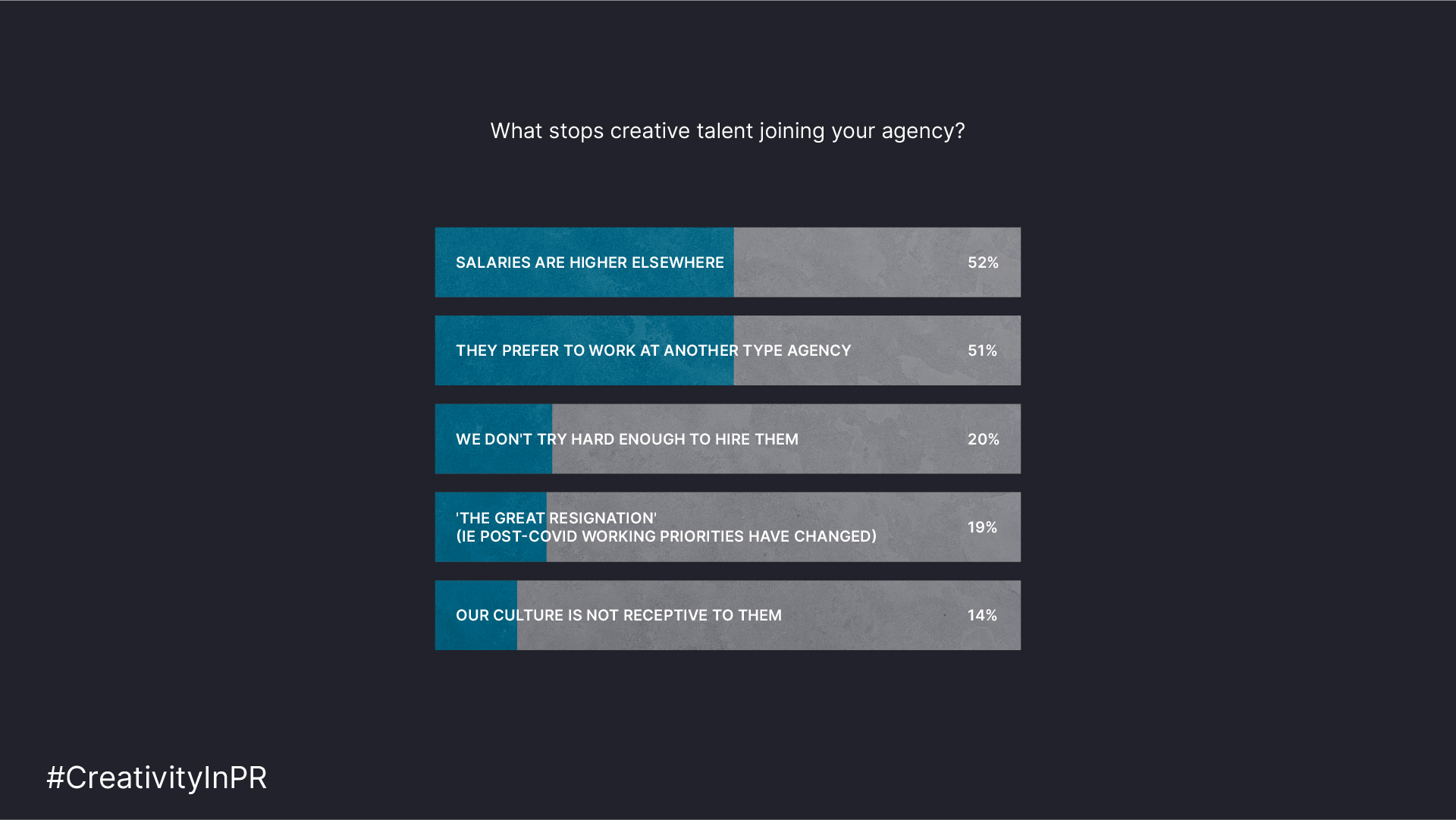 More than 50% of respondents feel that creative talent would rather work in a different type of agency – although the perceived lure of higher salaries is worth noting – 52% of respondents say salaries are better elsewhere. And with the likes of Deloitte and PwC keen to build their creative capabilities the war for talent seems unlikely to get any easier. 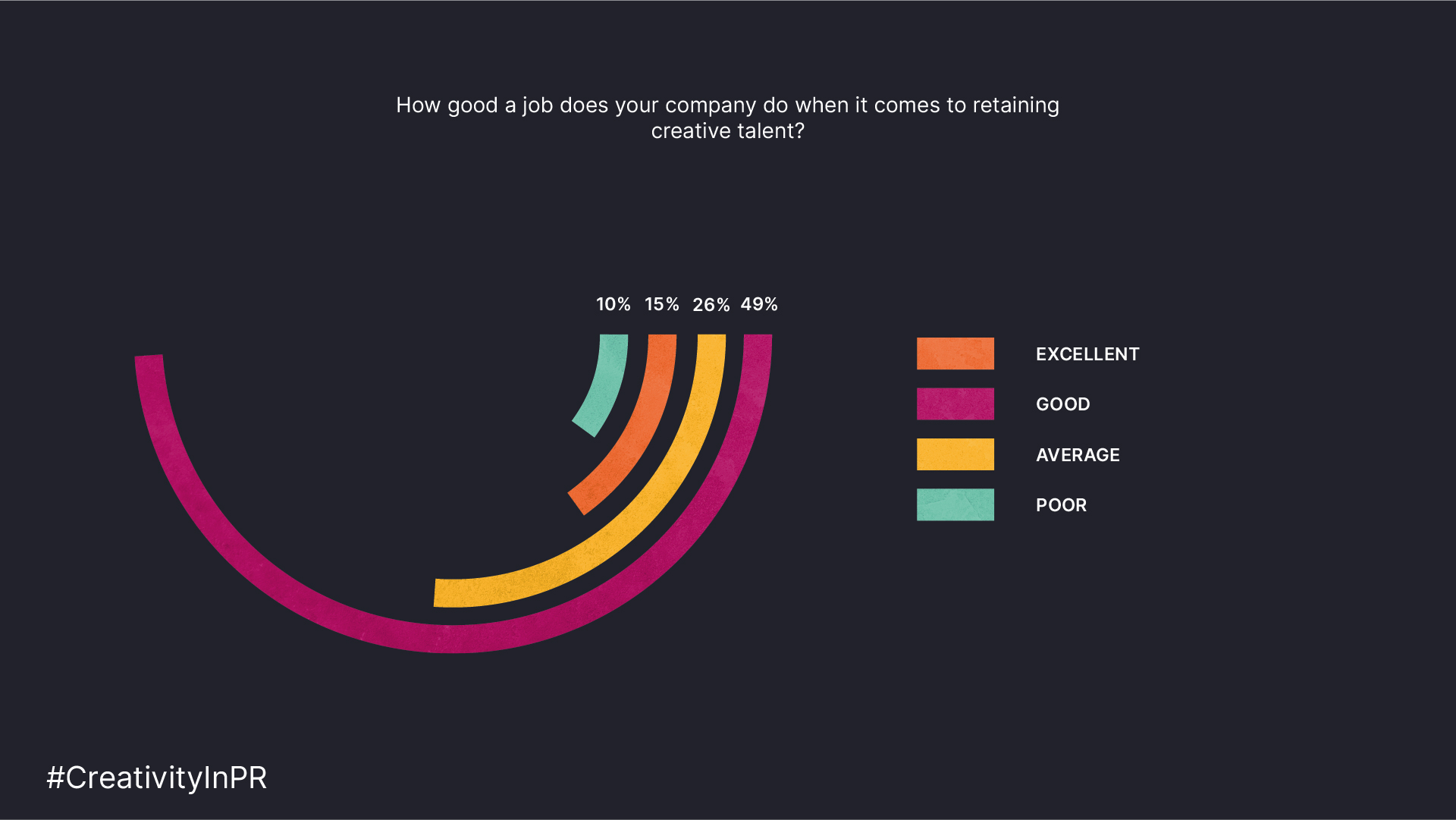 More encouragingly, well over 60% think their firms do a good job of holding onto their best creative talent. We also asked how effective HR was at nurturing PR creatives, and over 50% of those who replied had no complaints. But 1 in 5 rated HR's efforts as poor or non-existent.

“We tend to hire people that are like us, that like us - a good culture ‘fit’," says Now Go Create founder Claire Bridges. "Yet, organisations that promote cognitive diversity are more likely to innovate allowing people to approach things differently.  So, if you want to attract creative talent try to find space for the misfits too." 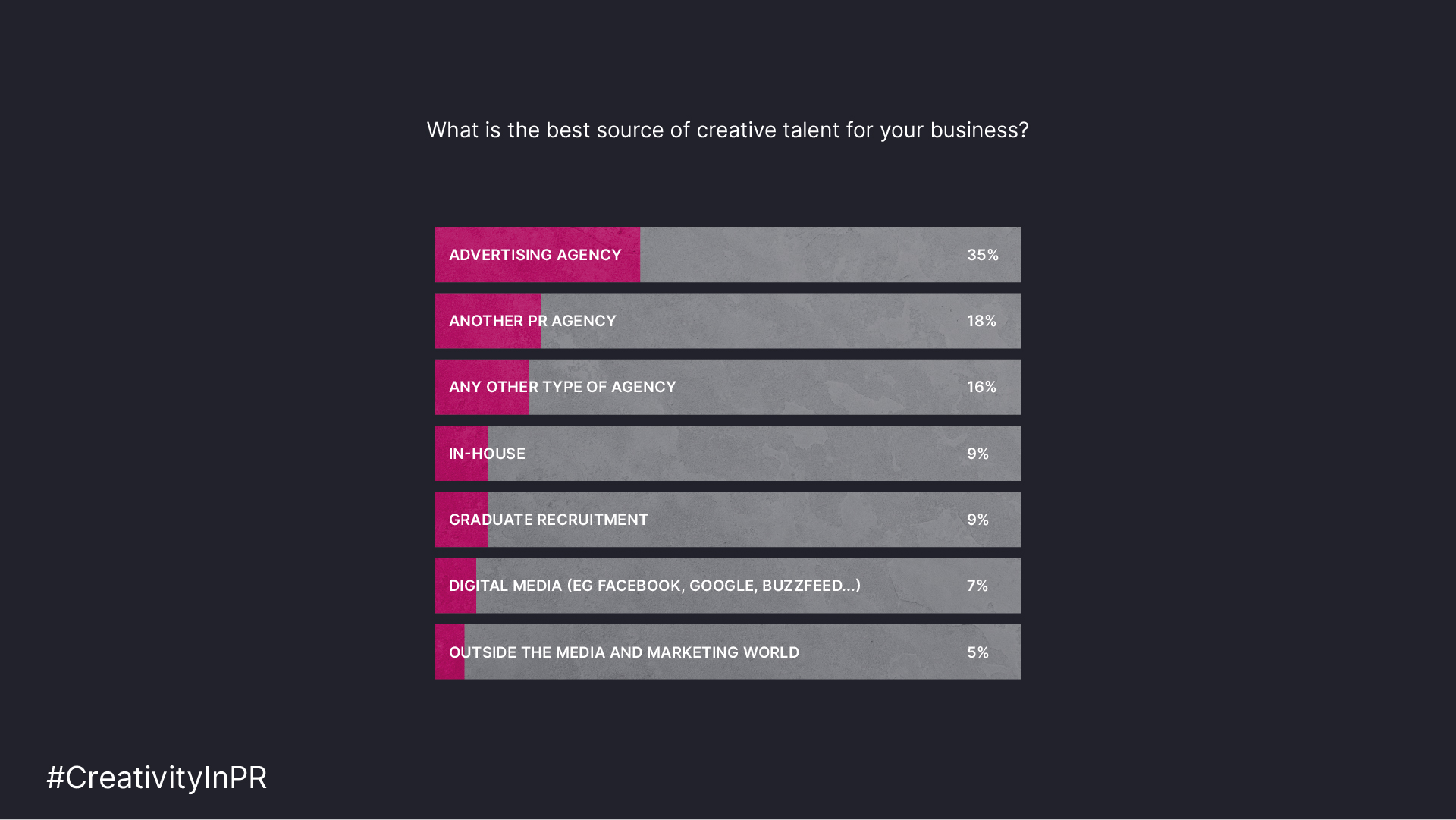 Tomorrow's creative talent, according to respondents, won't come from PR agencies: well over 50% think that other types of agencies – advertising especially (35%) – are where their next big thinkers will come from. Successive versions of this study have found there is no single or obvious career path in PR to developing into this role. This may be something for HR teams to consider when thinking about where the next generation of creative talent is going to come from.

“After spending two decades in the ad industry, I came to experience that the work that was winning awards for the agency, was better defined as earned. That’s where the interesting thinking is being done – it doesn’t have to fit a media buy or shill an RTB, there’s a purity and freedom to it, said FleishmanHillard Chicago ECD Colleen McTaggart. "As we’ve looked at developing creative talent, we are focused on developing the discipline of conceptual thinking, but with a free-range mindset. An idea can manifest itself in endless ways. This freedom in thinking is something we stress in retaining and attracting talent.

“I and many of my peers have migrated to PR agencies from the ad world, and I think we will continue to see that trend grow as creatives are looking to be more fulfilled by the work they create." 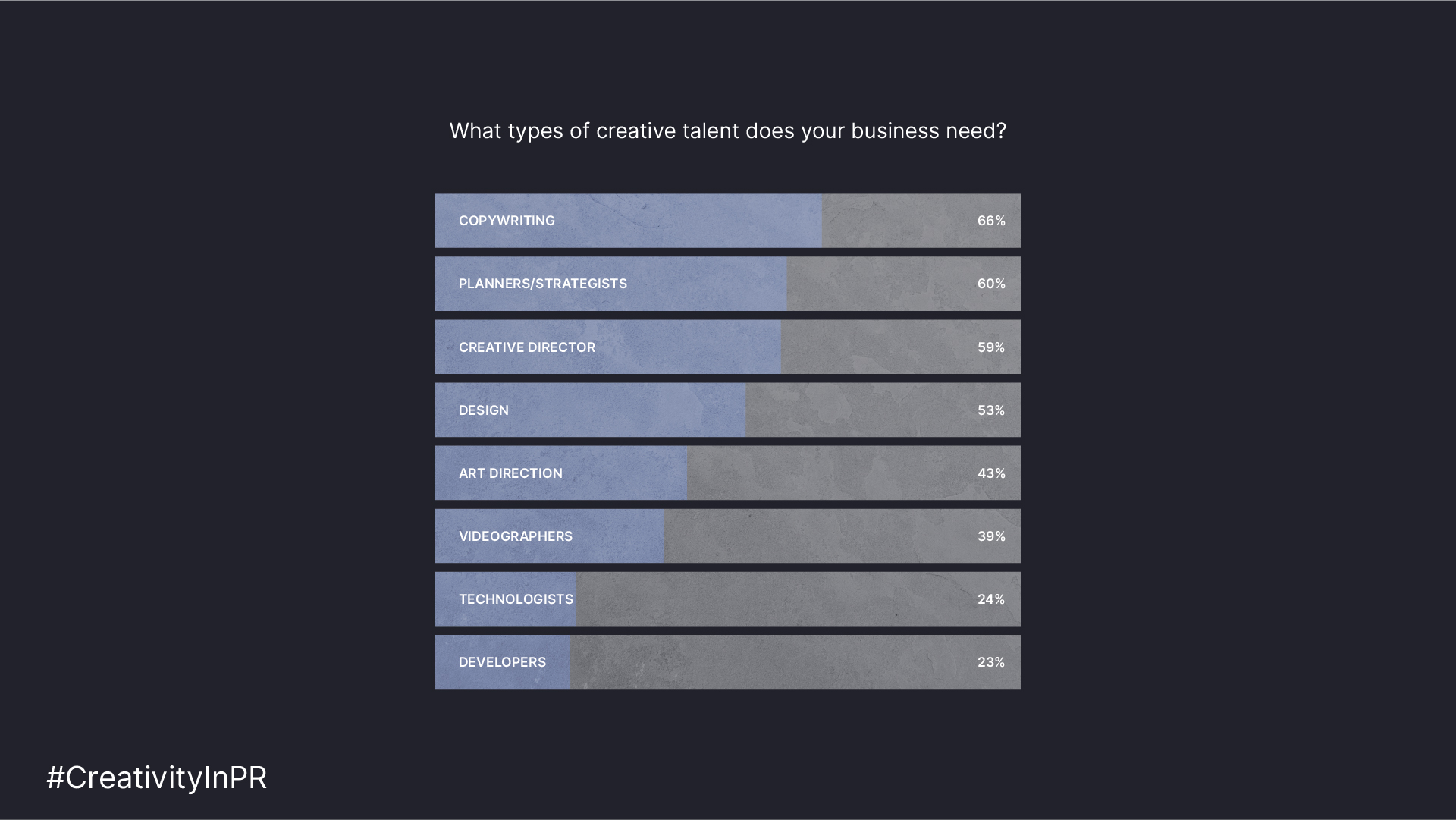 This question illuminates skills gaps and where HR teams and CDs may need to focus some of their recruitment energies. According to respondents, PR agencies need more copywriters – perhaps unsurprisingly 67% said that this was an area in which they needed talent – with great writing a fundamental PR craft. Just a few points behind were planners/strategists at 60%. Developers, videographers and technologists are also in demand. 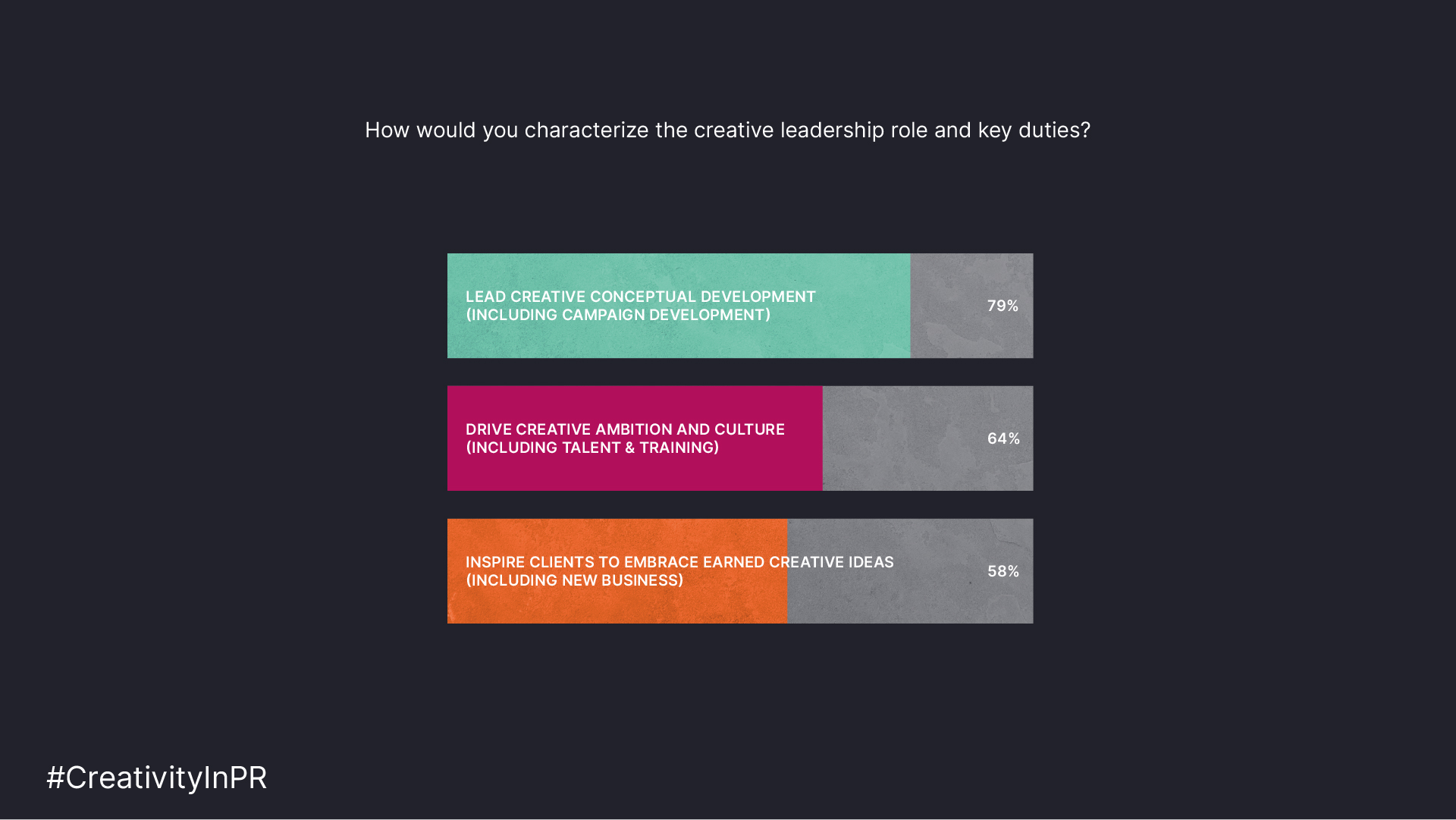 Ask five CDs what their role entails and you may well get five different answers but there are some areas of agreement: according to respondents, most (almost 80%) see it as leading creative conceptual development, but almost as many feel the role is to drive creative ambition and culture. 58% say that the role is to inspire clients to embrace earned media ideas.

"It’s not surprising that agreeing on what the creative leadership role entails is tricky," explains Bridges. "You need to be a manager and a mentor, have marketing and business nous, as well as problem-solving skills and it can be hard to make the transition ‘from being creative’ and generating ideas, to leading creative teams, something I understand first hand. The fundamentals - build trust in your team – without it you can’t have risk-taking, experimentation, debate, dissent or any of the other good stuff that leads to ideas getting off the ground." 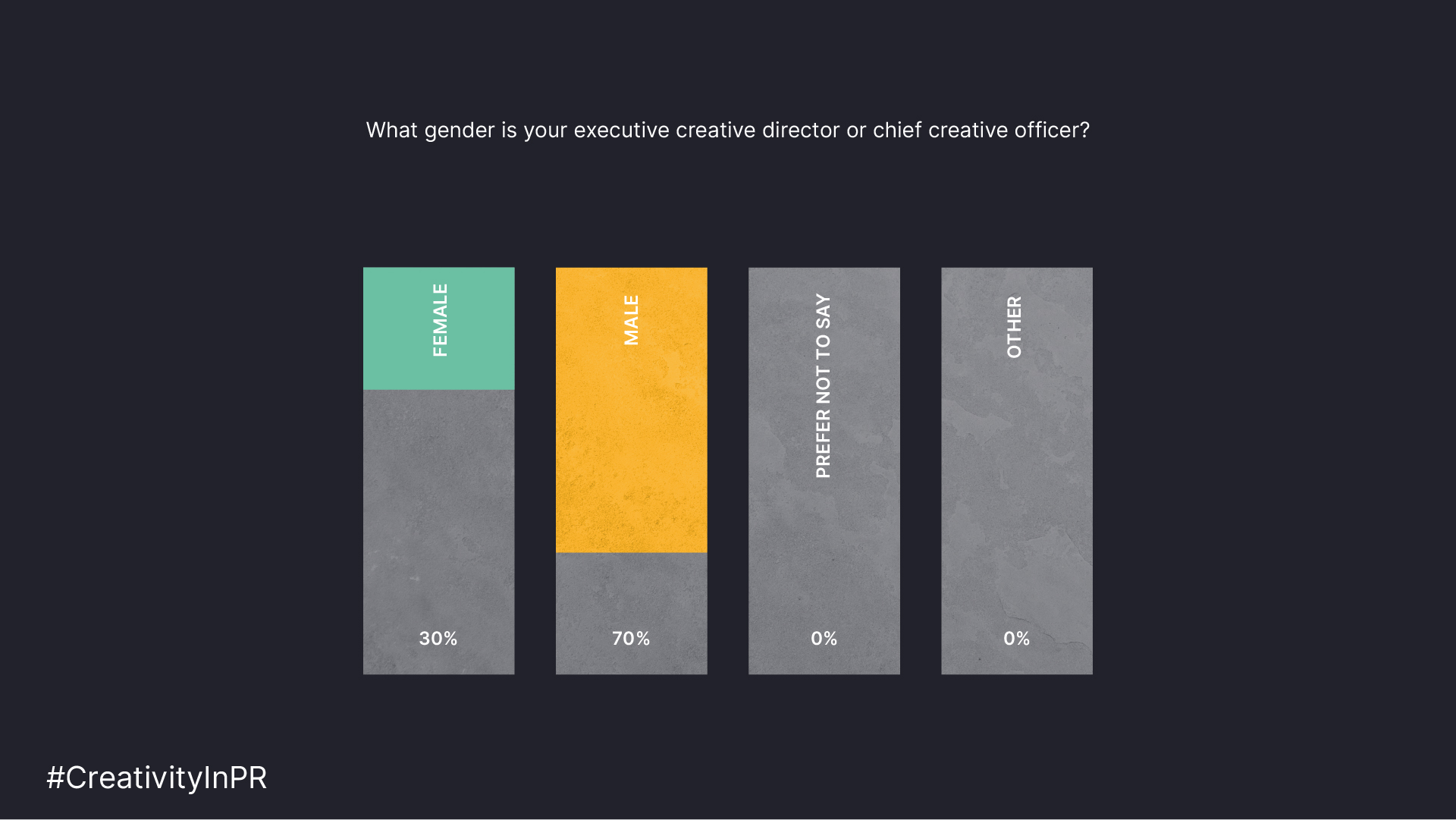 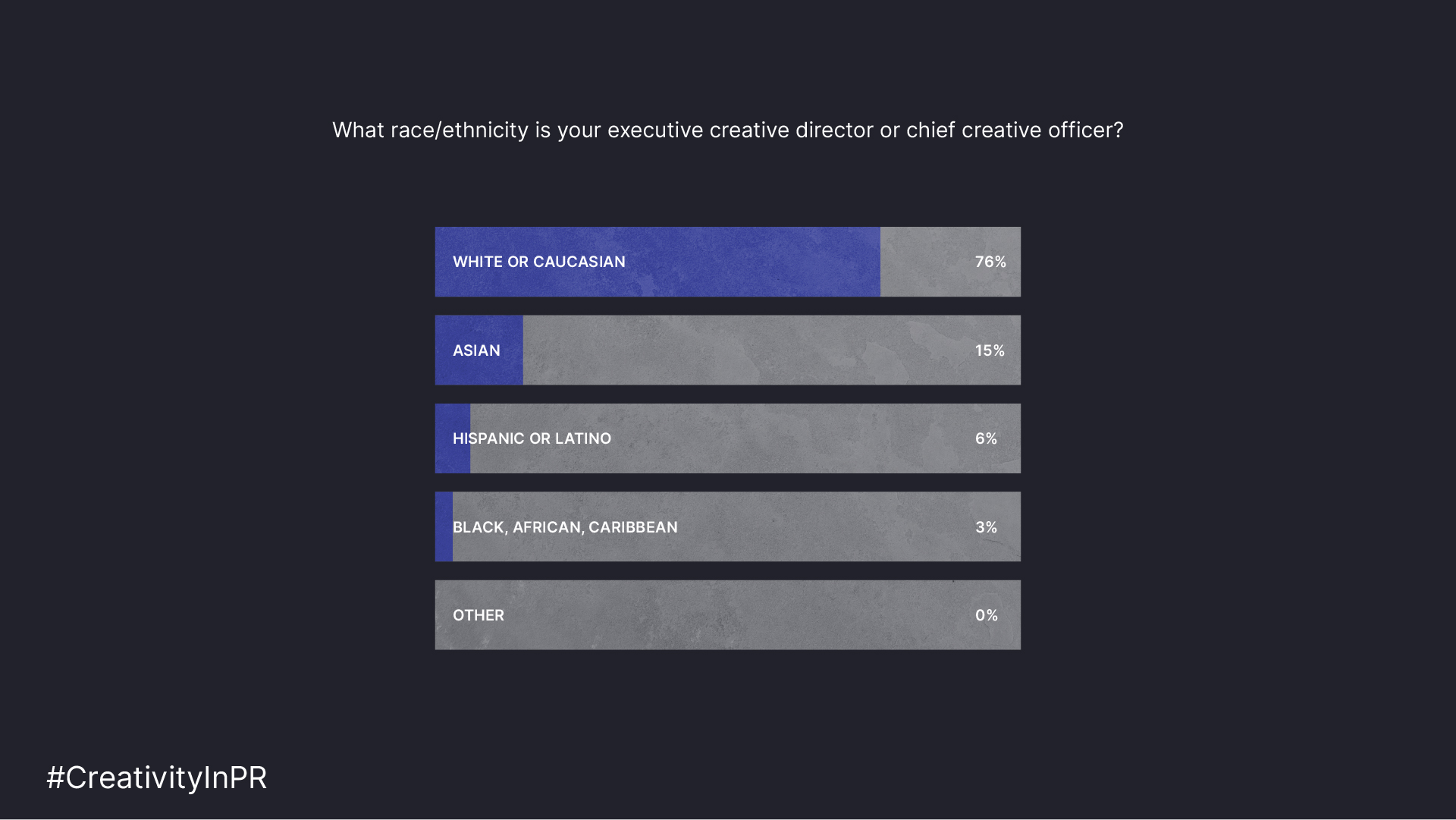 The white CD is still most commonly the one calling the shots, just as they were last year: the figure is 76% for two years running. Of even greater concern, just one respondent works with a Black creative director, despite the industry’s glaring struggles with diversity and inclusion. 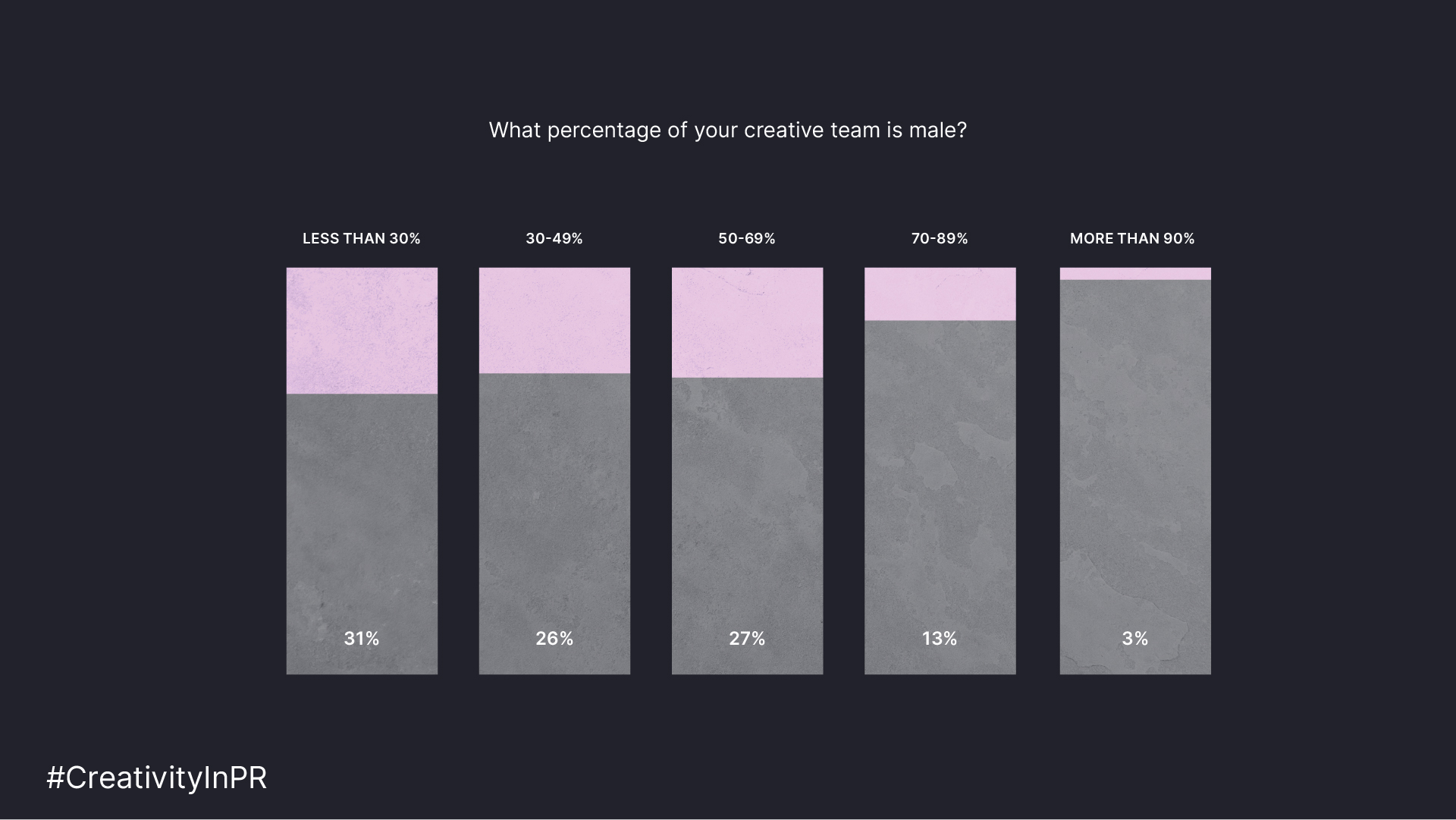 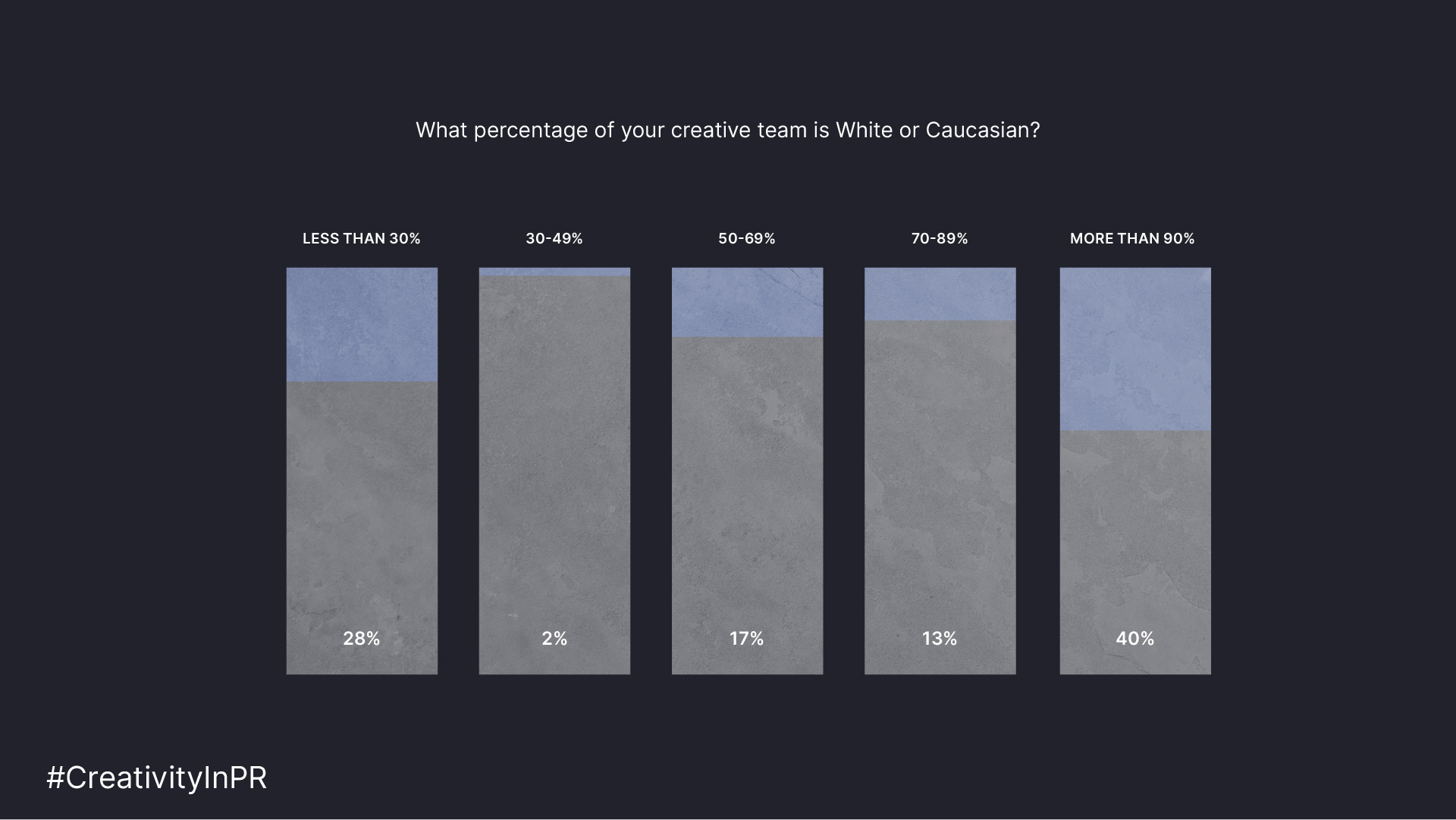 The good news is that most respondents report that creative teams are majority female. The bad news is that these teams remain overwhelmingly white. It stands to reason, if creativity continues to be viewed as a bastion of homogeneity, this will have significant repercussions for the quality of work being produced.

“When it comes to individual talent, our ideas will only ever be as diverse as the minds behind them," says McTaggart. "I am relentless in seeking representation in our talent, both for how their experience inspires the work, and how those individuals inspire others. For if you can’t see it, you can’t be it."

More findings from this year's study, supported by a special Roundtable in Cannes next week, will follow — covering the drivers of great creative work.

Agency People News In Brief (November 21, 2022)
PRovoke Media
// 21 Nov 2022
View All
comments powered by Disqus
Get your agency into the PR industry's most comprehensive listing of consultancies and teams from around the world
REGISTER NOW ×