Please refer to our Privacy Policy for important information on the use of cookies. By continuing to use this website, you agree to this.
Home Latest 'It's Not About Perfection' — State Street CMO On The Fearless Girl Fallout 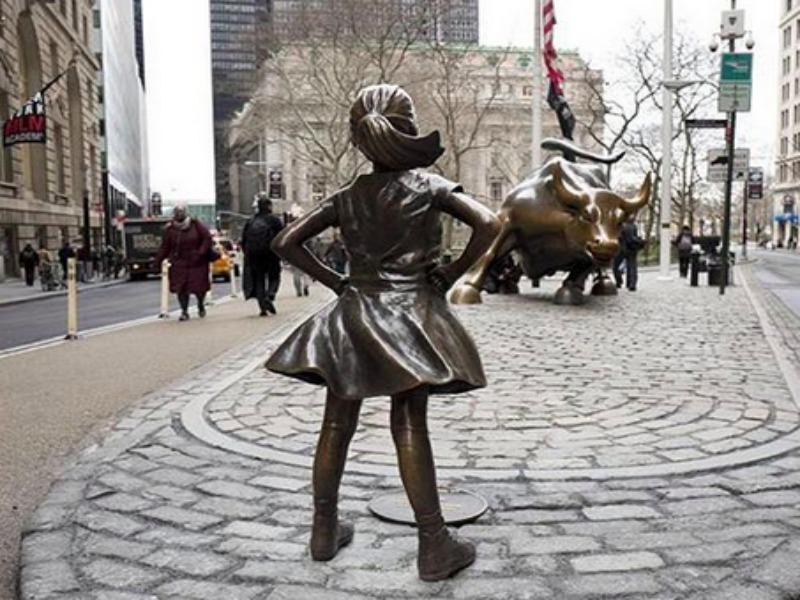 CMO Stephen Tisdalle admits State Street is "not at parity yet" after allegations of unequal pay undercut the message of its iconic Fearless Girl campaign.

DANA POINT, CA — A year ago this month, Manhattan financial firm State Street Global Advisors, with its agency McCann New York, erected a bronze statue of an emboldened little girl staring down Wall Street’s charging bull, a marketing move meant to send a message to corporate boards that gender diversity matters. State Street had a permit to keep the statue — a 4-foot 8-inch, 250-pound depiction of utter confidence — standing for one week.

Near instantly, the statue — aka The Fearless Girl — became a pop culture phenomenon drawing visitors, media attention and significant social buzz, while also attracting plaudits as a symbol of female power.

"This shows that if you have a message, and you create the right kind of experience, you can far surpass anything you can possibly do with a Super Bowl ad," said Stephen Tisdalle, the firm’s chief marketing officer. "I don’t think there is any person that does not admire what Fearless Girl represents."

In a presentation at the ANA 2018 Brand Masters Conference on Tuesday, Tisdalle detailed Fearless Girl’s story, from what the firm was trying to achieve when it commissioned her creation to how and why she near-instantly became a cultural icon. But Tisdalle also warned brands not to risk missing opportunities because they are concerned about whether their own house is in order.

Those comments come after parent company State Street Corporation paid $5m in October 2017 to settle allegations of unequal pay. "It’s about the aspiration and the challenge, not about the perfection," said Tisdalle.

While Tisdalle admitted that State Street is "not at parity yet," he believes the firm did have the credibility to move ahead with the campaign. "If we were to wait until everything is perfect we would have missed the opportunity to make a significant difference."

To say nothing of Fearless Girl’s impact on the company itself. “The changes within State Street Global Advisors and our umbrella State Street bank…have accelerated at a pace that never would have happened had we not done Fearless Girl,” he added.

Tisdalle also pointed to a "singular focus" as the key takeaway for brands that are aiming to achieve similar impact. He explained that Fearless Girl was conceived from State Street’s larger goal of promoting gender equality on corporate boards, something that the asset management firm had already been advocating via the proxy votes it has as shareholders in the companies in which it invests.

The initiative, which included installing the statue before daybreak, right before International Women’s Day, was devised to persuade other asset management firms to also call for more diverse corporate boards. Tisdalle pointed to the business case (studies shows female-led companies outperform others) as much as the case for gender equality.

“We were only interested in talking to our category,” he said. At most, State Street execs expected the effort would receive some TV coverage, perhaps some social buzz throughout the Northeast.

Instead (and with help from a Wall Street Journal story about State Street’s initiatives) Fearless Girl took off far beyond expectations, garnering attention from A-list celebrities, news outlets and women and girls who flocked to lower Manhattan to get a photo of themselves standing next to the sculpture.

Within 36 hours, Fearless Girl had her own Wikipedia page. A community-led petition successfully called on the city of New York to make Fearless Girl a permanent fixture.

Additionally, the statue's installation has reaped real-life business results for State Street, Tisdalle said. Of the 700 companies the firm targeted for having all-male boards, 152 have since added women since Fearless Girl's debut. Another 34 have committed to following suit.

“The notoriety of Fearless Girl gave us permission to work with those companies,” Tisdalle said. An added benefit is that State Street’s competitors are also lobbying for the change via their proxy voting power.

Yet State Street would not have been in the position to make these calls had the company not already been taking concrete steps to foster change before the campaign, added Tisdalle, noting that campaigns such as these mean little if the company lacks credibility. "The goods behind the message are critical."

Tisdalle credited The Fearless Girl’s success to the climate and appropriate timing, another factor he said companies are wise to weigh before launching advocacy campaigns. Although Fearless Girl was erected before #MeToo and other women’s movements gained momentum later in the year, consumers were already open to the message, he said.