Please refer to our Privacy Policy for important information on the use of cookies. By continuing to use this website, you agree to this.
Home Latest 'Sometimes The Transparency Is Going To Hurt Us' — Uber CEO On Rebuilding Trust 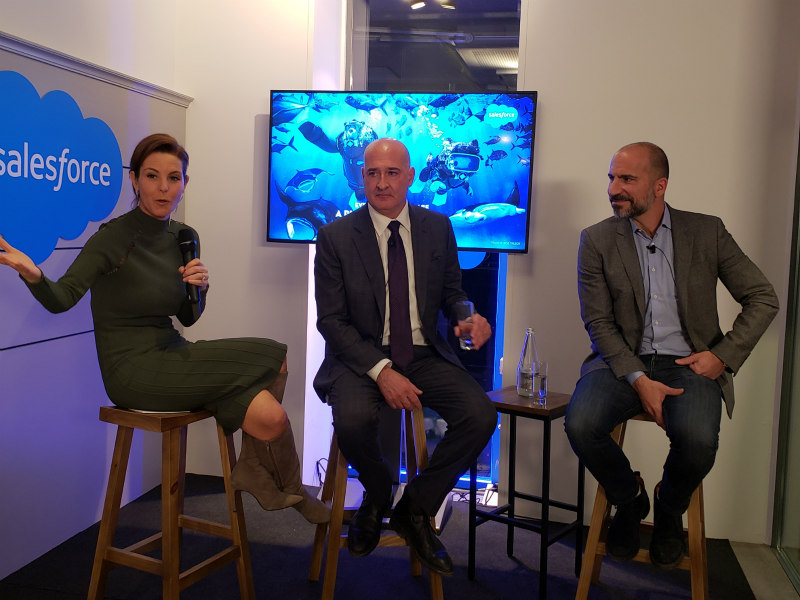 DAVOS — Tasked with rebuilding trust in the company, Uber CEO Dara Khosrowshahi yesterday said that the company will continue to focus on being as transparent as possible, even if it attracts social media criticism of its policies.

Khosrowshahi made the comments in a conversation at the World Economic Forum with Salesforce co-CEO Keith Block, moderated by MSNBC anchor Stephanie Ruhle. He noted that he got the job as Uber CEO "because of a lack of trust," specifically the #DeleteUber movement that rocked the company in 2017.

"We’ve got a long way to go but I think we’re on the right path and sometimes the transparency is going to hurt us, but most of the time I think it will help us," he said. "We are on a long, long road to rebuild trust."

That effort is complicated by the propensity for knee-jerk criticism on social media. Regardless, Block believes it is vitally important to listen to opposing views, even if they do not align with Salesforce's famously progressive agenda.

"People have a voice, the community has a voice and we have a responsibility to listen," said Block. "We may not like what they have to say but we do have to listen no matter how upset we might be about it."

While technology companies have attracted considerable criticism in recent months, Block believes that Salesforce's focus on being a "values-based company" will hold the company in good stead.

"If [customers] are betting their future on you it’s not just about the technology it is about trust and it is about the culture and it’s about your values. A lot of companies do business with us strategically because they align with our values," said Block.

Yet, as Ruhle pointed out, for all of the corporate rhetoric about trust and culture, "I have never listened to an analyst’s call where one single Wall Street analyst has ever asked about any of those things." Instead, she noted that the markets remain focused on "making money — is your bottom line working?"

Block responded that "there are no easy answers" on the "shareholder theory vs stakeholder theory" debate. "I do think that we live in an era of the activist CEO — I do think that will become the new normal," he said. "I think it is a transformation that will take a very long time given the incentive systems that we have in the world today."

Khosrowshahi, however, thinks that Salesforce remains an "exception rather than the norm," in an era when the connection between shareholder benefit and societal benefit (or capital and labour) has broken down. "I think that connection has frayed," he said. "CEOs are built to drive earnings per share. We’re earnings per share machines and as long as we can do sell-through methods that don’t improve labour we’ll do it because we’re incented to. So I do think that there’s a different social contract needed."