Please refer to our Privacy Policy for important information on the use of cookies. By continuing to use this website, you agree to this.
Home Latest Davos: How Do CEOs Overcome Internal Resistance To Innovation? 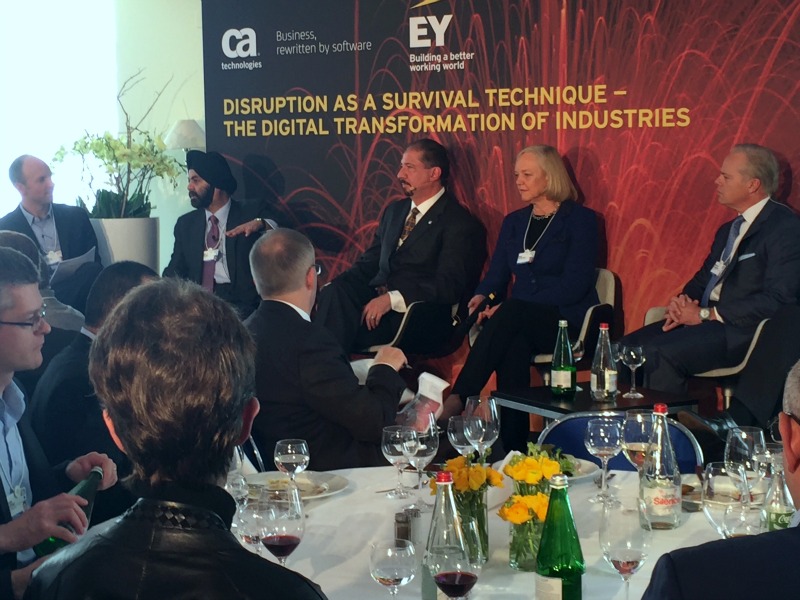 Davos: How Do CEOs Overcome Internal Resistance To Innovation?

CEOs from HP, Mastercard EY, CA and ING discuss why they need to set a visible example when it comes to embracing technological change, amid the cultural challenges posed by disruption.

DAVOS—Business leaders must visibly celebrate innovation if they want to overcome the internal resistance that big companies continue to experience when it comes to embracing technological change.

That was one of the key messages from a high-powered panel in Davos today, convened by CA Technologies and EY, and featuring the CEOs of those two companies along with MasterCard, HP Enterprise and ING Group. The discussion was moderated by Quartz editor Kevin Delaney.

Focusing on the challenges posed by rapid technological change, dubbed the 'Fourth Industrial Revolution' by the World Economic Forum, MasterCard CEO Ajay Banga pointed out that internal cultures are often characterised by fear.

"If you’re really going to be entrepreneurial, then you have to behave like a beginner all the time. Be willing to take a risk," said Banga. "The threat of disruption is a fear for most people."

That fear, added Banga, ensures that a company's employees are the hardest to convince, ahead of investors or the board. A culture of risk aversion among senior managers, added CA CEO Mike Gregoire, only reinforces the issue. "There’s still a notion of failure," he added, noting that CEOs need to change the definition of success at their companies.

According to HP Enterprise CEO Meg Whitman, that calls for a visible effort from business leaders to make their company cultures more accepting of risk and failure. "You have to decide what your culture is going to stand for," she said. " All of you that run companies, your people watch what you celebrate and what you care about. You can move the culture quite quickly based on where you spend your time."

Compared to startups, that can create their culture from scratch, big companies face a specific challenge in this regard. "You ask people to innovate and it’s hard, you’re asking them to cannibalise their own business," said Weinberger, pointing out that EY hired an innovation head to sit outside the business units and focus on disruption. "We realise if we don’t disrupt us, someone else will."

Also, Weinberger has implemented a $1m award for teams that are the most innovative at his company. "There’s no such thing as an imperial CEO anymore," he said. "Giving people the ability to fail but also the ability to lead is really important."

While digital disruption first took place among consumer companies, Whitman believes B2B players are poised to undergo a dramatic shift. "Big companies like ours with proud legacies are at the cusp of being very significantly disrupted if we don’t embark on our digital transformations," she said, pointing to such areas as supply chain, customer data and analytics, and an IT infrastructure that reflects the app economy.