Please refer to our Privacy Policy for important information on the use of cookies. By continuing to use this website, you agree to this.
Home Latest EU Study: Female Corporate Affairs Heads Earn 16% Less Than Male Counterparts 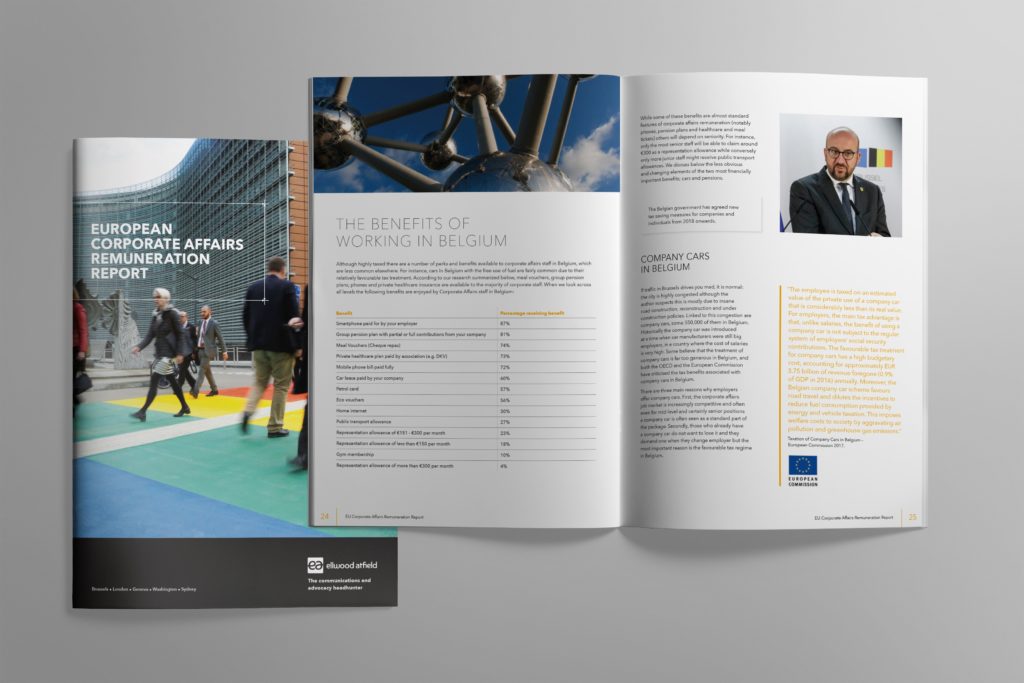 BRUSSELS – An in-depth survey of more than 300 public affairs professionals working in Brussels and around Europe, across industry sectors from agribusiness to transportation, reveals the extent of the gender pay gap among corporate affairs staff.

The European Corporate Affairs Remuneration Report is the first report of its kind from recruitment consultancy Ellwood Atfield. It notes that the number of Brussels lobbyists has increased from 10,000 to 25,000 in the last 20 years, and as demand has increased so has the price of talented senior lobbyists.

There were also gender differences in who holds the top jobs: men occupy around 70% of the most senior positions (global, EMEA and EU public affairs heads).

Report author Mark Dober, senior director at Ellwood Atfield, said: “The principle that men and women should receive equal pay for equal work has been enshrined in the European Treaties since 1957. However, there is a long way to go before this principle is a reality across the EU. In Germany and the UK for instance the situation is much worse than in Belgium. Growing awareness and societal pressure will no doubt diminish the gender gap over time but it will not happen overnight.”

The report shows salaries at all levels of corporate affairs can vary widely. Most global heads of corporate affairs based in the EU (75% of whom are men) earn less than €250,000 as a base gross annual salary, but some earn substantially over €350,000, particularly where they report directly to the CEO in high-paying sectors and financially successful companies.

Almost half of global heads of corporate affairs expect to make more than a 20% annual bonus, and half make an additional 20% or more of their annual salary through stock and share options, with almost one in ten earning 50% or more of their salary in this way. Global heads can earn substantially more in non-EU jurisdictions, notably the U.S., Australia and Switzerland.

The report includes data from the European Commission’s Transparency Register, showing the top four spenders on EU corporate affairs in 2017 were multinationals with a U.S. heritage: GE, Google, ExxonMobil and Microsoft. German companies Deutsche Bank, BASF, Siemens and Daimler also feature in the top 10, making Germany the second biggest spender on corporate affairs. The only UK company to make the top 20 is BP.

Dober said money was only one element of job satisfaction in this sector: “It is also about having positive colleagues and bosses, work/ life balance, job autonomy, career development opportunities, job security, and possibly even a higher purpose to what you do. European corporate affairs jobs typically tick many of these boxes. So my advice is appreciate the fact that you are working in one of the world’s most interesting professions that should be future proof – neither Artificial Intelligence nor robots are going to replace you any day soon. Indeed, government affairs may be one of the last human jobs standing – can you imagine a society where lobbyists or politicians are replaced with machines?”