Please refer to our Privacy Policy for important information on the use of cookies. By continuing to use this website, you agree to this.
Home Latest FleishmanHillard And Ketchum Top ICCO Global Award Winners 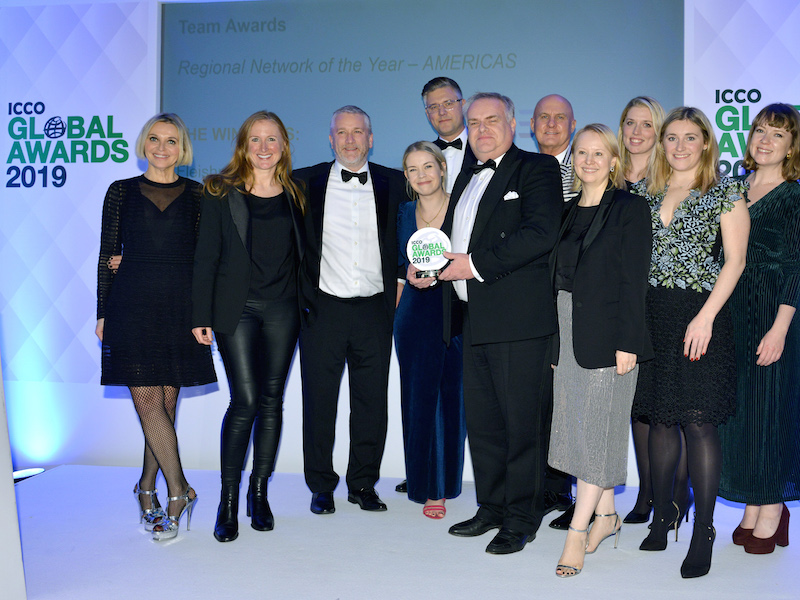 Hotwire’s Barbara Bates was named as PR leader of the year, while outgoing ICCO president Elise Mitchell was inducted into the Hall of Fame.

LONDON — FleishmanHillard and Ketchum dominated the winning agencies at the annual ICCO Global Awards, presented at The Savoy in London this week.

FleishmanHillard took home the award for Americas Network of the Year (pictured), as well as three campaign awards in the technology, not-for-profit and event launch or stunt categories. Ketchum picked up three awards for campaigns in the financial services, healthcare and purpose categories.

The PR leader of the year award went to Hotwire’s global CEO Barbara Bates, and the tech agency also walked away with the B2B award.

The rising star award went to Rishitu Amarnani, vice president of integrated media at Current Global – the second year in a row this prize has gone to a candidate from India.

Elise Mitchell, founder and chairman of Mitchell Communications Group, who completed her tenure as ICCO president in October, was named as the 37th inductee into the ICCO Hall of Fame, which celebrates exceptional contribution to the global PR industry.

Mitchell said: “It is a tremendous honour to be inducted into the ICCO Hall of Fame, which includes many of the iconic trailblazers in our industry. This distinction recognizes the talent, creativity and relentless pursuit of excellence exhibited by the entire Mitchell Communications Group team. Working alongside them, as well as the Dentsu organization, has been one of the greatest joys of my life, and I want to share this honour with them.”