Please refer to our Privacy Policy for important information on the use of cookies. By continuing to use this website, you agree to this.
Home Latest Global Women In PR Launches Leadership & Mentoring Scheme 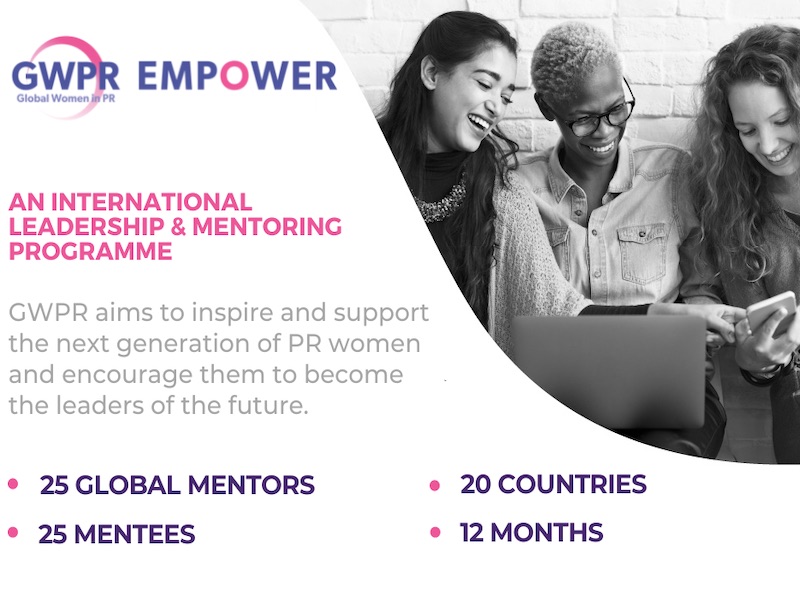 The networking organisation has developed Empower, an international programme for 25 mid-career women.

The programme, supported by PRovoke Media, will run throughout 2022 and will include a combination of cross-border mentoring, learning and profile building. The learning element will involve masterclasses given by industry experts on topics such as leadership skills, managing a business and career planning.

GWPR will also provide opportunities for mentees to participate in panel discussions, a thought leadership project and international networking.

Empower has signed up an impressive roster of 25 female PR and communications leaders from around the world – from networked and independent agencies and in senior in-house roles – as mentors, including from Google, Edelman, Omnicom, Ketchum, Ford, Ogilvy, Visa, Nissan, MSL, Bayer, H+K, Alibaba and Weber Shandwick.

Mid-career PR women working anywhere in the world are being invited to apply to be mentees using this form. All mentoring sessions will be run virtually in English and will be cross-border. Once accepted onto the programme by a selection committee, the 25 mentees will be matched with an international mentor.

The springboard for the programme was a 24-hour speed mentoring initiative held by GWPR earlier this year for 300 women on International Women’s Day. Many GWPR national groups already run their own mentoring programmes for PR women in their own countries, but until now there has been no opportunity for cross-border mentoring.

The programme was also prompted by GWPR research in 2020, which revealed that while the global PR industry is two-thirds female, men still hold 64% of seats in the boardroom. There are only a handful of women CEOs leading global agencies and the vast majority of corporate communications heads are male. Respondents to the 2020 GWPR Annual Index survey believed the most important initiative for helping break down barriers to the boardroom was to have more senior women as role models.

GWPR joint president Angela Oakes said: “Ultimately the new Empower programme will make a real impact on the careers of our 25 mentees and start to address the gender imbalance in the boardroom. By creating this unique international leadership and mentoring programme GWPR is aiming to inspire and support the next generation of PR women and encourage them to become the leaders of the future.

“Our goal is for the programme to build in coming years and create a talent pool of sought-after and empowered global women leaders.”