Please refer to our Privacy Policy for important information on the use of cookies. By continuing to use this website, you agree to this.
Home Latest ICCO Summit: How Prepared Is PR For Artificial Intelligence? 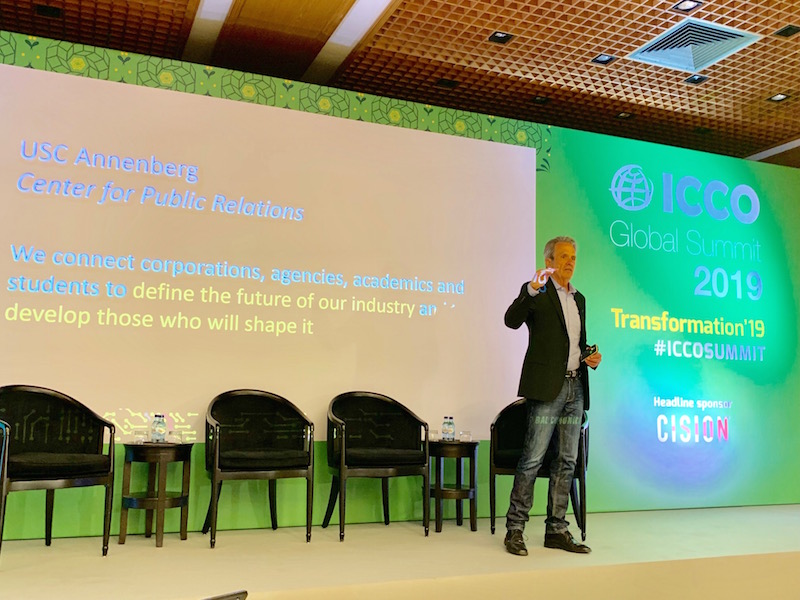 ICCO Summit: How Prepared Is PR For Artificial Intelligence?

Golin chairman Fred Cook shared new research on the impact of technology on PR, while a senior panel discussed how the industry is adjusting to AI.

LISBON — More than 80% of global communicators believe technological innovations will be the major driver of change in the public relations industry over the next five years, but only around half say they are currently on top of using the latest technology to enhance the effectiveness of their communications.

This was one of the main findings of a new study by the USC Annenberg School for Communication and Journalism, focused on technology in PR. The results were revealed by Fred Cook, Golin chairman and director of the school, at the ICCO Global Summit in Lisbon last week.

“Technology will change the way we work, but there’s not a lot of leadership at the senior levels of an organisation in terms of trying new tech,” said Cook. “We can find that, and bring it to our clients. There’s a lot of opportunity – we’re making progress as a profession but we have a long way to go.”

The research also showed that the most important technology used in the PR industry today is still media monitoring (at 44%, by far the biggest response of all the tools rated), and this is still expected to be one of the most important in the next five years.

Social media tools showed the biggest jump in assumed future importance: over half of the respondents said they expect social listening, social media management and influencer identification platforms to be very important tools for PR professionals in the future.

But only 18% of all PR executives believe artificial intelligence will be a very important technology for them in the future although, as the research paper points out, that may be because only 3% claim to be very knowledgeable about potential AI applications.

Cook said: “Most people are not at all knowledgeable about future applications of AI in communications. You may not know all this stuff, but the people you’re going to be hiring in the future do, and if you hire the right ones, they can educate you. Technology may become more important than human capital.”

As an example of how AI can make communications more effective, Cook cited Golin’s work for Walmart, which has more than seven million social media responses a year: “We work with two vendors, using AI to identify and categorise comments that need a direct response, are potentially a brewing crisis that needs immediate reaction, and good news we can amplify to build the brand.”

In the following panel session on preparing for artificial intelligence and automation, moderated by FleishmanHillard UK & Middle East CEO Jim Donaldson, Archetype’s APAC director Lee Nugent said AI and machine learning were an important opportunity, but with caveats: “Our challenge as communicators is to digitise the predictable to gain efficiency and speed of automation, but continue to humanise the exceptional.”

Nugent said some of the main areas where AI and machine learning could enhance comms were personalisation and emergence of chatbots – citing Air Asia as the gold standard since its chatbot “absolutely represents the tone and feel of the brand” – and content-to-commerce, for example Alibaba’s “smart mirrors” that allow customers to “try on” clothes. He also said AI could help with prediction, such as better recognition of emerging crises, although he added that “You still need the human touch to shape a crisis response.”

At Hotwire, global CEO Barbara Bates said the agency was looking at AI to build in efficiency around manual tasks “so we can deploy more resources to what clients want, which is creative ideas and strategy. It’s all about freeing people up to do things that are more meaningful, and it will drive fundamental structural changes to the agency business model.”

Underlining the need for a human touch as machine learning becomes more pervasive, Finn Partners managing partner Chantal Bowman Boyles said AI wouldn’t be replacing more creative elements of communications work any time soon: “I’m still a sceptic. There was an essay in the New Yorker on using a natural language engine to write a news story, and most of it is still gobbledegook.”

And at NewsWhip, which provides AI-based solutions to the PR industry, CEO Paul Quigley said machine language was still primitive: “The closer you are to numbers, the better the AI can do, but the data always need an element of creative interpretation.”

Nugent’s opinion was that machines are not “naughty enough” to be truly creative: “You need to be naughty, childlike and ready to play to be creative. Machines use past data to predict future activity, not read human emotions. For small-scale short social ads, AI creative might be possible, but if you want to generate an emotional reaction that drives behavioural change, machines aren’t anywhere near being able to do that.”

Nitin Mantri, CEO of AvianWE and the new president of ICCO, said the key consideration was achieving a balance between using AI and humans: “Gut feel is important, but we’re seeing more and more campaigns driven by analytics and insights, and we need that to get people to think differently. But storytelling will always require a human touch, and no chatbot can give you emotion.”

Bowman Boyles added that another important question around greater use of AI and machine learning was ethics: “The rise of AI systems has created an imperative for all of us as communicators to be ever more open, transparent and honest. My main concern is that there isn’t yet a globally accepted moral framework for developing or using AI that governments, companies and users can refer to, and no way of monitoring that.

“Until there is global agreement on ethics there is the potential for systems to be developed without long-term consideration of the consequences, and we run the risk of seeing more fake news, with more fake comments.”