Please refer to our Privacy Policy for important information on the use of cookies. By continuing to use this website, you agree to this.
Home Latest ICCO Summit: “Understanding How People Behave Is Key To Crisis Management” 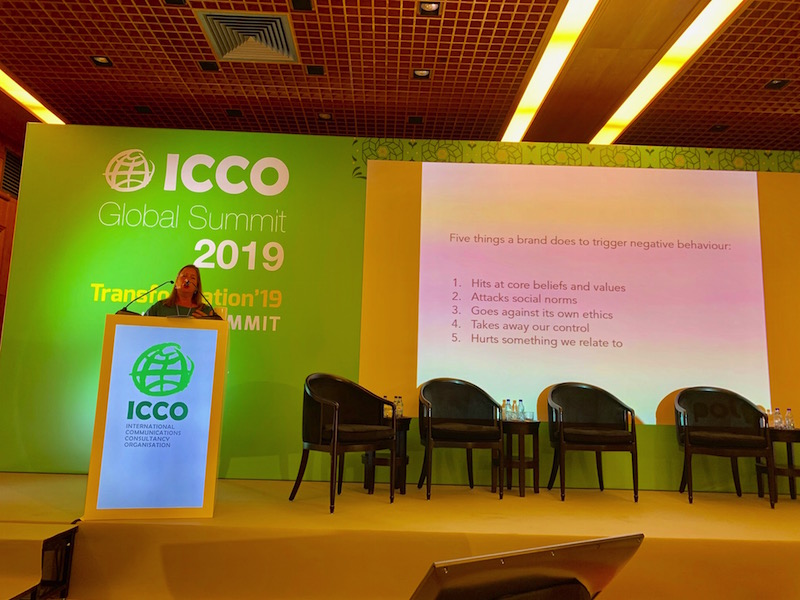 Polpeo’s Kate Hartley outlined the importance of neuroscience and psychology in helping brands communicate effectively through a crisis.

LISBON — Understanding behavioural science – including why people get so angry online – can help brands communicate effectively through a crisis, according to Kate Hartley, co-founder of crisis simulation firm Polpeo.

Speaking at the ICCO Global Summit in Lisbon last week, Hartley said there was a “psychological contract” between consumers and brands that was broken in a crisis: “We often talk about passion brands in communications – like Apple, Nike or Harley-Davidson – which you might even love enough to have as a tattoo, not just because the product is good, but what it says about you as a person and how the brand makes you feel.

“Increasingly, that’s also about how the brand behaves, whether it is ethical and whether it matches your values. We give money to that company and we expect a certain behaviour in return. When a brand breaks that contract, we feel betrayed and we lose trust.”

Hartley said that neuroscience showed us that, just as human relationships can move quickly from love to hate, so too could brand-consumer relationships: “The same bit of the brain deals with love and hate, but hate doesn’t deactivate the part that deals with rationality so much. We can overlook minor flaws in a brand we love – if a favourite coffee brand doesn’t pay its taxes, or if something is super-convenient we can overlook workers’ rights – but when a brand breaks its contract to the point that we want to attack it online, you have cold, hard reasoning that you don’t have when you love it.”

The “cycle of outrage” was another psychological factor in brands finding that crises escalated quickly on social media, said Hartley: “If I post something negative online and it is liked, that gives us a hit of dopamine, and if I feel like I’ve lost control and say something on social, that takes away my feeling of powerlessness. What gets our attention is something that outrages us, or makes us anxious, or makes us laugh. It can impel us to do good – volunteer or protesting – but it can also be negative.

"We may be getting into a habit of outrage, and habits are addictive. And for brands, the cycle of outrage – where crowds attack each other’s opinions on social, leading to polarisation – means they lose the narrative, and in the middle are those who just disengage.”

Misinformation – or fake news – was another huge problem for brands on a crisis footing, said Hartley: “Dealing with the deliberate spread of misinformation during a crisis is very difficult, because as PR people we’ve been used to dealing with journalists who are mostly interested in the truth. The speed at which it travels is also new.

“Only 10% of readers now pay for their news, which means even reputable sites have to compete with sensationalised news for clicks and revenue. And once we’ve been taken in by one piece of misinformation, we are unlikely to trust anything we read, which makes a crisis even more difficult to manage.”

Our need for an immediate response from businesses when something goes wrong also has a damaging effect on crisis communications, said Hartley: “It’s not new – it’s an ancient survival instinct to need immediate information – but social compounds our need to not wait for information because it’s so easy to fire off a quick post or tweet. Facebook now rates companies as to whether they respond within 15 minutes: we used to talk about the ‘golden hour’ in crisis comms, and we need that hour to prepare the best response, but we no longer have it.”

The personal impact on agency and client leaders and teams also needed to be factored in to crisis management in the social media age, Hartley said: “Building resilience and how teams withstand this attack often gets missed. When faced with a social media threat, our brains respond in exactly the same way as a physical threat: to prepare for fight, flight or freeze.

“There is a real issue around keeping the team mentally fit in a crisis. In a simulation you see their ability to cope start to dip after 2 hours, just as the crisis increases. If you switch teams every four hours, their ability to cope might dip, but it would never get to the point where they can’t deal effectively with a crisis.”

Finally, Hartley said that the most important element of psychology that businesses often failed to take into account in a crisis was the need for empathy: “Communicating with empathy will get you through a crisis, but empathy doesn’t always go with leadership.”

She cited the four-point empathy framework developed by Professor Theresa Wiseman to be used in cancer nursing in the UK’s National Health Service (NHS) as a useful tool for crisis communicators: see the world as others see it; understand another’s current feelings; be non-judgemental; and communicate the understanding.