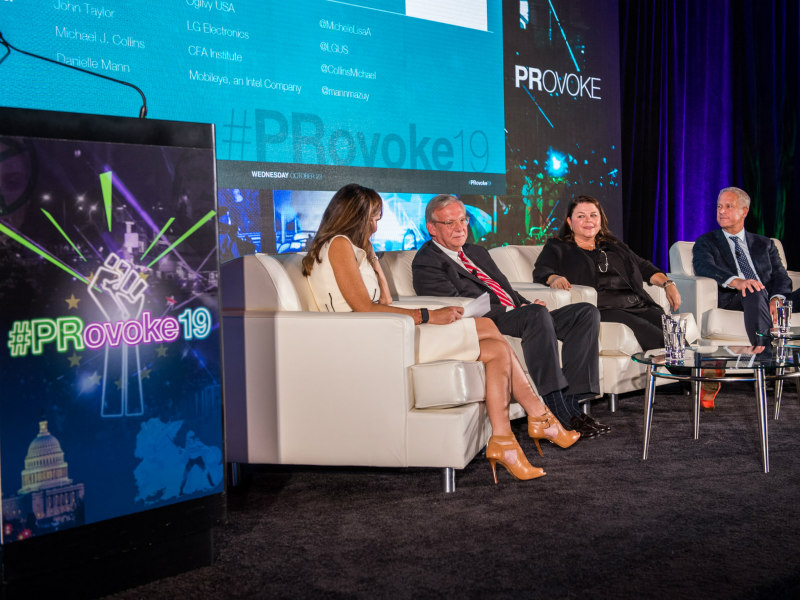 PRovoke19: 'PR Used To Be The Afterthought'

The corporate communications role is evolving, with many now leading when it comes to developing ideas, said a panel of senior executives at PRovoke19 today.

WASHINGTON, DC — The role of the corporate communicator has changed rapidly amid the rise of digital and data, with many taking on the traditional marketing role of idea generation, heard delegates at PRovoke19 in Washington, DC today.

That was one of the assertions from a wide-ranging conversation on how the corporate communicator role is evolving, which was moderated by Ogilvy US head of PR & influence Michele Anderson and featured LG Electronics SVP of public affairs and communications John Taylor, CFA Institute CMO Michael Collins and Mobileye senior corporate comms director Danielle Mann.

"PR used to be the afterthought," said Taylor. "Marketing would cook up a program and say 'go PR it', which I hate. [It's] much different today. Many of our marketing initiatives, the germ of the idea starts with us."

The same shift has taken place at Intel, said Mann, which is the parent company of Mobileye. "PR usually leads and there is tension [with marketing]...but creative tension can be great," said Mann. "We get better products out of it."

And at the CFA, added Collins, "I do believe that we lead a lot of ideation from a PR or communications perspective, rather than a marketing perspective." For Collins, that trend is more important than any concerns over whether the CCO or CMO is leading the transformation.

That shift has not been without challenges, though. Mann pointed to the measurement challenges that continue to bedevil the PR department, particularly in an organization as sales-focused as Intel.

"They don't want awareness metrics, brand metrics, impressions. They want to see that impression turn into a sale," said Mann. "We have a CCO and CMO who both report to our chief sales officer. So we are very much tied to revenue and customer satisfaction. We have to measure all of those things plus the bottomline."

And while the PR function might not command the budgets that the marketing department does, Mann believes that its impact is often proportionally higher, and that this value needs to be constantly reinforced across the organization.

"For a small amount of money, relative to the trillions of dollars spent on marketing every year, there's impact," said Mann. "We need to educate in terms of the value that communications brings, because we do touch every part of the company."

The comms department may have grown in terms of influence but Taylor, for one, does not expect communications heads to take over the marketing function just yet.

"The role of the senior communicator has increased in recent years, at least in my company, to really show the value," he said. "We used to report to marketing. Being at the table reporting to the CEO with the same stature of the CMO, has a lot of value to us as a profession but also best serves the organization. Are we going to usurp the role of the CMO? I don't think so. What they bring, frankly, we're not equipped to do."