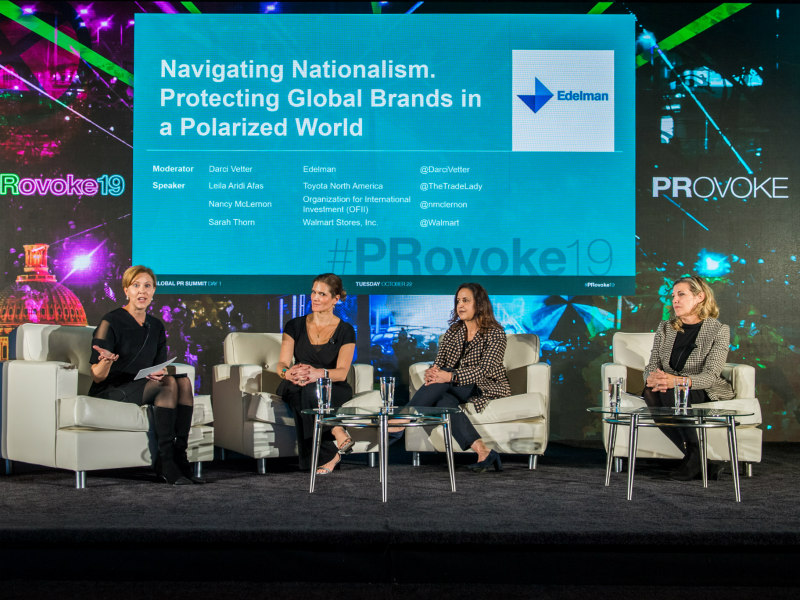 PRovoke19: Communicating In The America-First Era

Comms specialists from domestic and international giants grapple with the issues raised by today's anti-trade environment.

"A lot of thorny trade topics that seem dull are, all of a sudden, front page news," pointed out Toyota North America director of international public policy Leila Aridi Afas. "For the first time, we all of a sudden felt like we were no longer welcomed into this market. And our products and employees were somehow seen as a threat. It's forced us to reorient in how we explain ourselves."

And while that has required Toyota to "demystify" its operations in the US, as Aridi Afas put it, it also offers the company an opportunity to present its story and, perhaps, make the case for trade.

"It's been a great opportunity for us to begin anything with our commitment to the American market," said Aridi Afas. "When trying to explain how critical NAFTA was to the automotive industry and how critical the automotive industry is to the American economy. We grew up under NAFTA. Trying to explain how this is a benefit that has trickled down to every segment of the economy. It's really gone back to how do we emphasise our American presence in an America-first administration."

Indeed, at the OII, which represents 200 foreign companies investing in the US, president and CEO Nancy McLernon has advised her members to embrace the prevailing narrative rather than trying to fight it.

"I strongly believe it's important for our companies to run to their weakness," said McLernon. "They may not think that anyone knows they are a foreign company. Their competitors know. If it's something they don't mention, it can be used against them."

Accordingly, McLernon thinks MNCs should rely on facts to demonstrate the benefits that large companies can bring, even in an environment that seems distrustful of multinational trade. And that means making the case beyond the narrow confines of Washington, DC.

"What in your corporate culture and your global heritage can you wear proudly? There are a variety of things that we have to work on together — things like climate change and terrorism — and large companies have the resources to devote to these big societal issues," she said. "I'm trying to empower our companies not just to talk in Washington, but to talk to other stakeholders. On the matters of trade and global connections, I don't think we can rely on our leaders anymore."

"The good news is that facts really help," added McLernon, pointing to the work her organization had done to win over Trump supporters. "Across the country, international companies employ more than seven million people. Over the last five years, 62% of all new manufacturing jobs were created by international companies."

Walmart, for its part, is more challenged than most — given its reliance on trade and opposition to tariffs. As senior director of global government affairs Sarah Thorn pointed out, trade policy is now the primary issue for the company when it comes to investor and media calls, resulting in a lengthy process to identify the right message for the company against this backdrop.

"We don't like tariffs and we were able to say that we think tariffs are a really poor way to collect revenue," said Thorn. But that stance has opened the company up to criticism. "The challenge right now is everything is so polarized and even saying simple things, like we don't like tariffs — people are looking to see if you are with us or against us."

And while Aridi Afas noted that "trying to stop globalization is like trying to stop gravity", she believes that companies have to speak up if they hope to combat "an environment where there's a zero-sum view of investments."

"We've earned a seat at the table," said Aridi Afas. "We've earned the right to shape these policies and decisions that affect our American workers. You have a voice and you have the right to use that voice."
Article tags
Events Edelman Walmart Toyota PRovoke19 News