Please refer to our Privacy Policy for important information on the use of cookies. By continuing to use this website, you agree to this.
Home Latest PRovoke19: “We Need To Shift The Mindset That Multicultural Marketing Can Be Bolted On” 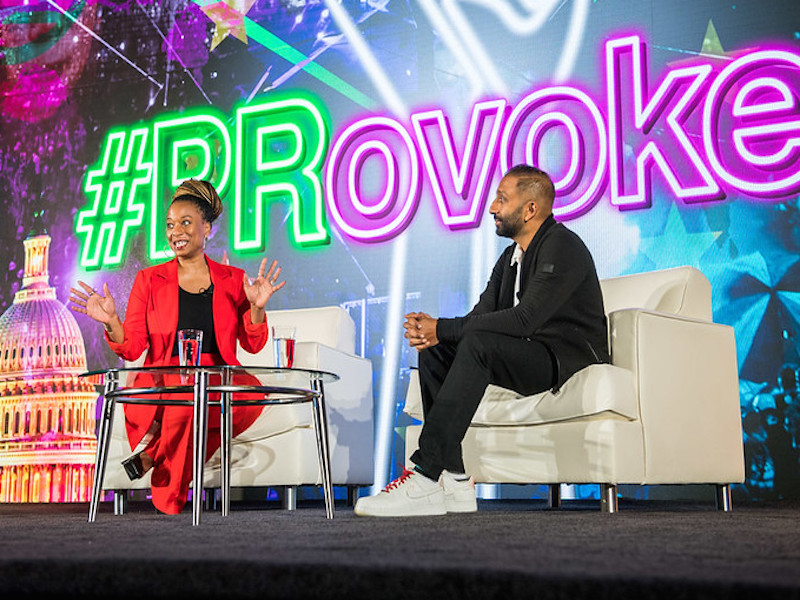 PRovoke19: “We Need To Shift The Mindset That Multicultural Marketing Can Be Bolted On”

WASHINGTON, DC — The notion of multicultural marketing as a discrete discipline needs to change, according to Egami Group CEO Teneshia Jackson Warner, speaking at the Entrepreneurs’ Forum at the PRovoke19 Global Public Relations Summit.

In conversation with Holmes Report CEO and editor-in-chief Arun Sudhaman, Jackson Warner said: “It really is about continuing to educate the industry: there needs to be a mindset shift from looking at multicultural marketing as a niche that can be bolted on at the end. But when you think about the general market, you need to think about creating campaigns that reflect many cultures and diversity, whether that’s race or gender.”

“There are many segments, like baby food or beauty, where multicultural audiences are the lead purchasers in that market. As much as possible, we try to drive it back as not a ‘nice to have’ or CSR work, but to say, this is business.”

Jackson Warner’s advice to agencies trying to develop better multicultural marketing practices was to start with intention, and a diverse team: “To become more diverse from the inside out you need to look at it from an employee standpoint, and be very intentional so your inside starts to be more reflective of what America looks like.

“Be intentional about having women in C-suite positions, and look at how many African Americans, Hispanics and Asians you have on your roster. It may mean you need to recruit in new places. And it’s not just about moving the needle in hiring practice, but what you do to make sure that talent feels that your organisation is a place where they belong.”

Jackson Warner also told the story of building Egami Group from its beginnings 12 years ago to a multi-million-dollar multicultural marketing powerhouse that became the first minority-owned firm to win a Cannes Lions Grand Prix: “When I started, I didn’t even know what an agency was, and I didn’t envision this as an agency, but what I was sure about was my passion around culture, multicultural audiences, creativity and communication.”

The Grand Prix — the first to be claimed on stage at Cannes by an African American woman — was won for Egami Group’s work with P&G on The Talk, an emotional campaign for Tide which focused on black parents talking to their children about how to deal with racism.

“When I say ‘it’s time for the talk’, you think about sex. However, we found through research that when you say that in the homes of African Americans, it’s time to talk to your child about the first time they encounter racial bias. We wanted to shine a light on the talk, in an effort to stop the talk.

“It was a big social issue to take on, at a time when in America we were experiencing an all-time high of racial incidents. It may have looked like an opportune time to jump into the conversation, but what P&G did right was that it wasn’t the first time they’d taken a stand on bias: they had a track record, from the My Black Is Beautiful campaign ten years before, so they could say, this is not new for us.”

Jackson Warner’s advice to brands around getting cause-driven work right was, as in this case, to ensure it was authentic: “Rather than jumping into a cause or a social issue because it’s the next hot thing, look at what connects to your brand purpose and story, what you have a right to do, and what you have a genuine interest in doing. It’s very important that brands aren’t seen as being opportunistic, and when you enter into a cause you’ve already put a stake in the ground. If it’s something you’re starting to care about, it’s OK to do grassroots work before going big, because consumers can sniff it out.

“Also, know your role in the conversation: The Talk was by no means positioning P&G as the authority on racial bias, but as facilitators of the conversation. It resonated with the community because they were willing to bring in people from the outside, including activists, to test their thinking and help along the way. They said: we’re not the experts but we care enough to want to know how this is impacting your community and to shine a light on this injustice.”

When brands got things wrong, Jackson Warner said it always came back to “a lack of diversity in the right rooms along the cycle.”

Getting agencies and brands to be more enlightened around racial issues was, she said, down to giving their employees voices: “If you look inside your organisation and pose the question: what keeps you up at night, what bothers you, you will start to see different pain points, from a mom who feels the workplace is not conducive or inviting to young girls who hear ‘you’re pretty, for a black girl’ to LGBTQ team members who want us to push the limits on equal rights. When P&G came to us, they were open to us being provocative, so we asked our employees what mattered to them, and together we tackled something in the world that we are very proud of.”

Jackson Warner said “know what you know, and know what you don’t know” was her biggest lesson from her 12 years running the agency: “It took a while for our firm to become comfortable saying we know what we know – multicultural marketing and purpose – and we had a right to be a leader in that space. Once I knew these were our sweet spots it was the criteria for who we worked for and why we worked for them. Then knowing what you don’t know: as our team of creatives grew, we had a weak spot: the financial back end. As soon as I realised, I recruited a strong financial team to support our growth.”

And Jackson Warner concluded by saying that while the agency was still 100% independent, she was looking at investment for the first time: “We’ve started to take on business advisors and now we’re opening up to have discussions with investors. We’ve grown organically by way of boot strapping, passion, creativity, and calling our own shots. However, we have visions to take on more business, grow, and take on new technology, and to achieve some of those we are at the point to take on investment.”