Please refer to our Privacy Policy for important information on the use of cookies. By continuing to use this website, you agree to this.
Home Latest PRovokeEMEA: "Trust Is A New Form Of Brand Equity" 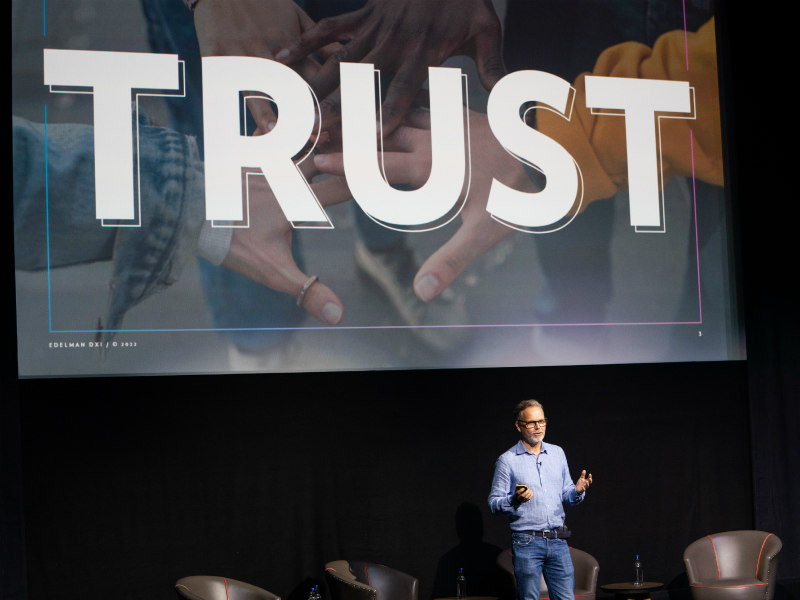 PRovokeEMEA: "Trust Is A New Form Of Brand Equity"

Speaking at our PRovokeEMEA Summit in London, Edelman's Toby Gunton examined how a better understanding of trust can be applied to drive long-term business impact.

LONDON — In recent years, Edelman's high-profile Trust Barometer study has explored the 'vicious circle of mistrust' that has opened up deep fissures in society. That, contends the firm, opens up opportunities for the corporate world to take on increased social responsibilities — but requires business to become much more sophisticated in terms of using "trust capital" to its advantage.

That was the message this morning from Edelman data & intelligence head Toby Gunton, addressing the PRovokeEMEA Summit in London. "Trust defines an organisation's licence to operate, lead and succeed," he said. "Without trust, people don't believe you. If you have no credibility, you're operating in a high risk environment."

Despite these findings, said Gunton, most companies routinely measure sentiment and reputation rather than trust. And both of these are poor proxies — the first focusing on single, transient experiences, and the second involving group consensus and consideration.

"Trust is about multiple personal experiences," said Gunton. "It's about preference and loyalty. It's about that lifetime value. If you're only looking at sentiment and reputation, you are leaving the explanatory and predictive powers of trust on the table."

The difficulty, believes Gunton, comes from measuring something as intangible as trust. Edelman has addressed this by considering multiple signals in addition to polling questions, including financial data, panel data, employee reviews, product reviews, media coverage and social media conversation.

All of which has helped them create a model that involves what they describe as five dimensions of trust — functional, transactional, moral/ethical, social/environmental and personal. These are not created equal, stressed Gunton, and their relative importance will differ depending on the stakeholder group in question.

"We're in an environment where trust is lacking. Businesses have that opportunity to step in," concluded Gunton. "Measuring and diagnosing trust is just a starting point. If you can understand it, then you can use it to your advantage."