Please refer to our Privacy Policy for important information on the use of cookies. By continuing to use this website, you agree to this.
Home Latest Trust Barometer: Cycle Of Distrust Threatens Societal Stability 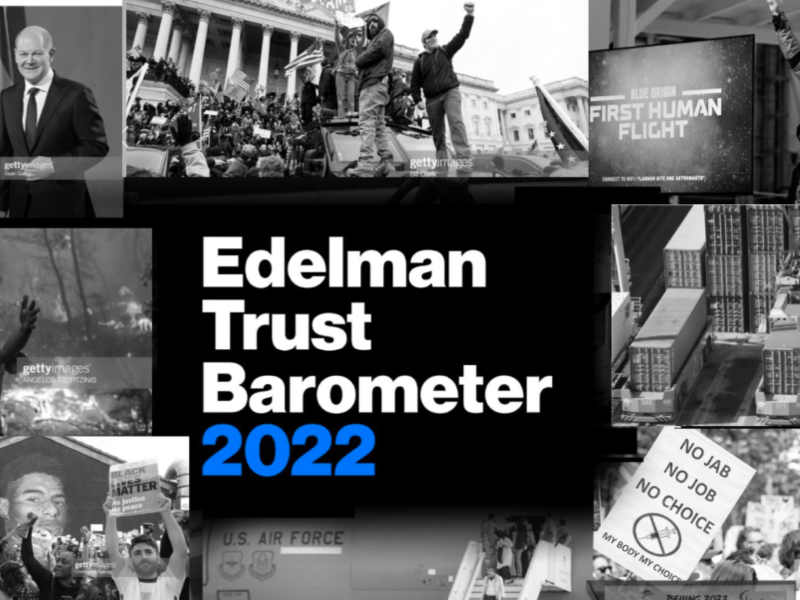 The 2022 Edelman Trust Barometer finds that business is the most trusted institution for the second consecutive year, as trust in government and the media continues to fall.

The survey of 36,000 consumers in 28 countries found 48% of respondents view government and 46% view media as divisive forces today, versus business and NGOs which fared better with 31% and 29% respectively.

On top of that, government leaders (42%) and journalists (46%) are the least trusted societal leaders, whereas people have the most confidence in coworkers (74%) and scientists (75%).  Most respondents also believe that the government (66%, up nine points) and journalists (67%, up 8 points) are lying to them.

“Government is seen as less competent than business, and we are in a whole new game,” said Edelman CEO Richard Edelman. “We have very big problems and government isn’t seen as able to manage them.”

The collapse in government trust was particularly acute in developed democracies (not one reached a 60-point score), largely pinned to respondents in every one of those countries believing they will be worse off financially in five years — and 85% fear they will lose their jobs to factors including automation. The US ranks 43 in the trust index (a 10-point drop since 2017), 40 points lower than China, at 83.

52% of respondents said capitalism in its current form is doing more harm than good.

Distrust has become the default, with most respondents (59%) saying they tend to distrust until seeing evidence that something is trustworthy, and 64% believing people in their country lack the ability to have constructive and civil debates.

In turn, business, which is the most trusted institution for the second consecutive year, is under increased pressure to step up to fill the leadership void.

55% of respondents believe companies are best equipped to take a leadership role on societal issues and 65% believe in business’s ability to get results in doing so. Yet less than half of those surveyed believe government is effectively taking a leadership role (44%) or getting results (42%).

When considering a job, 60% of employees expect their CEO to speak out on controversial issues they care about and 81% of respondents want CEOs to be personally visible when discussing public policy or their companies’ work that benefits society. The study found 66% of respondents believe ‘my employer’ is the most believable source of information.

All of which has created an over-reliance on business to fill the leadership void left by the government — a job companies are not built to do, Richard Edelman said.  “It’s not sustainable in the long run,” he said.

Rather, Edelman said, it is a time for business to be a stabilizing force, and step up to tackle issues like wages, climate change, reskilling workers, and diversity — while trying to stay focused on policy and out of politics.

Other institutions seeking to restore public trust will have to follow suit. “Now is the time for action because action drives trust. Communications alone doesn’t drive trust,” Edelman said. “People need evidence that you are making the change.”