Please refer to our Privacy Policy for important information on the use of cookies. By continuing to use this website, you agree to this.
Home Latest PRovokeGlobal: "Communicators Are Increasingly Becoming The Decision Makers" 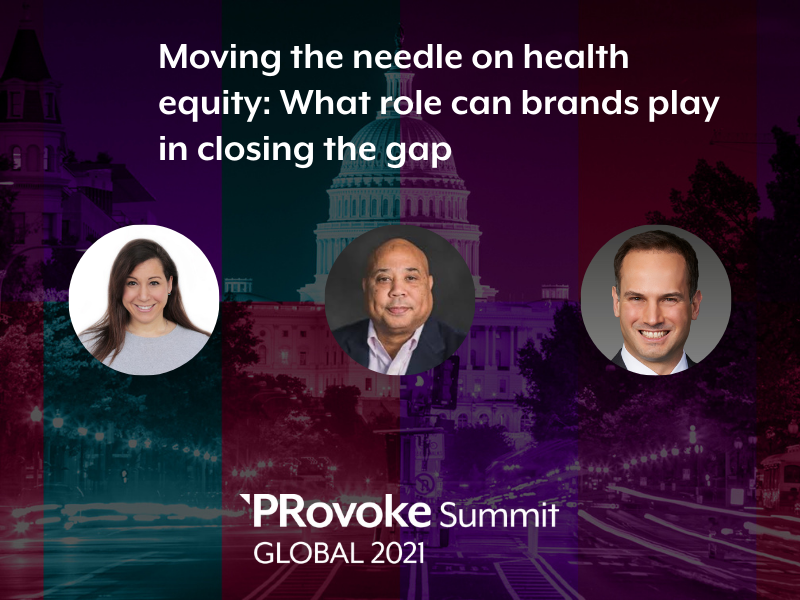 The pandemic has brought critical health equity issues to the forefront, along with the unique role that communicators can play to address them.

The pandemic has brought critical health equity issues to the forefront, along with the unique role that communicators can play to address them, heard delegates at the 10th PRovokeGlobal PR Summit this morning.

"The pandemic opened our eyes to longstanding health inequities – comms has a role in addressing and progressing health equity," said Lorrimer. "The vaccine effort has been central to this, including access and reach in marginalised communities and tackling hesitancy."

WBA, of course, has played a pivotal role in terms of the vaccination drive, learning some crucial lessons in terms of communicating with underserved communities. “Make sure you meet your audience where they are at and make sure you know who that audience is," said Radelet. "You can throw all the science you want at people but sometimes they just want to be heard in that moment."

"One of the challenges we have in any company is that we sometimes stray from audience-focused messaging," added GSK's Bolden. "Where the health crisis has driven us, is that we have to put the audience first. It has given us a bully pulpit to put these audiences that have been underserved first."

That means finding media that resonate with Black and Brown communities, or even ignoring the mainstream media altogether. "There’s no silver bullet to reaching underserved audiences – digital is the most direct, and the channels we relied on historically will not come back," said Bolden. "We need to push our leadership to embrace new channels to keep that audience at the fore."

“In comms you learn the same lessons over and over again," added Radelet. "Feelings matter over facts — you can talk about administering 40,000 vaccines but that doesn’t beat telling personal stories."

For Black and Brown audiences, specifically, who are more likely to suffer the ill effects of Covid, and many other diseases, that also means forging credible partnerships. GSK, for example, is collaborating with the Rutgers School of Public Health to address health equity gaps in their communities, said Bolden.

"It’s given us a really strong platform," explained Bolden. "During the pandemic we’ve used communications to be that bridge between societal, commercial and public health. We’ve leveraged the need to communicate with the public like never before."

Those kinds of partnerships must persist beyond the pandemic, added Bolden, but are underpinned by the increasingly pivotal role that communicators are playing. "We need to bring more non-traditional partnerships to the table to help us be more effective," he said. "Reaching out to places of worship wouldn’t have happened 10 years ago, but communicators are increasingly becoming the decision-makers in the organisation."

"What we found over the last couple of years, is that communications rose in priority in comparison to marketing," agreed Radelet. "You didn’t need a slickly produced commercial, necessarily, but just getting something out on social channels."

In some ways, though, Radelet believes the pandemic may have been "the easy part", given how pivotal his company is to the ongoing Covid-19 story. "We’ve got to make sure that we challenge ourselves as communicators that we don’t stop talking about these issues. We’ve got to take the momentum we have right now."

Supporting these broader changes, though, particularly in the wake of the BlackLivesMatter movement, is increasing diversity in senior corporate roles. Bolden contends that, prior to George Floyd's murder, he may not have been a serious candidate for the role he now holds at GSK. "That has created an opportunity for me personally to bring a lot of other people along who look like me. We really have to make a difference. The opportunity for me is personal but in an incredibly macro way — to bring voices to the table that have historically not been heard."

WBA, meanwhile, is one of just two Fortune 500 companies led by a Black woman. "Hopefully that’s indicative of progress we will see," said Radelet. "If you’re interested in health equity and advancing DE&I, look at your personal life, your friends, how diverse your experiences are outside work, the content you’re putting on LinkedIn, and how you are serving the community. We are what we do."