Please refer to our Privacy Policy for important information on the use of cookies. By continuing to use this website, you agree to this.
Home Latest PRovokeGlobal: Why National Security Has Emerged As A Key Stakeholder Challenge 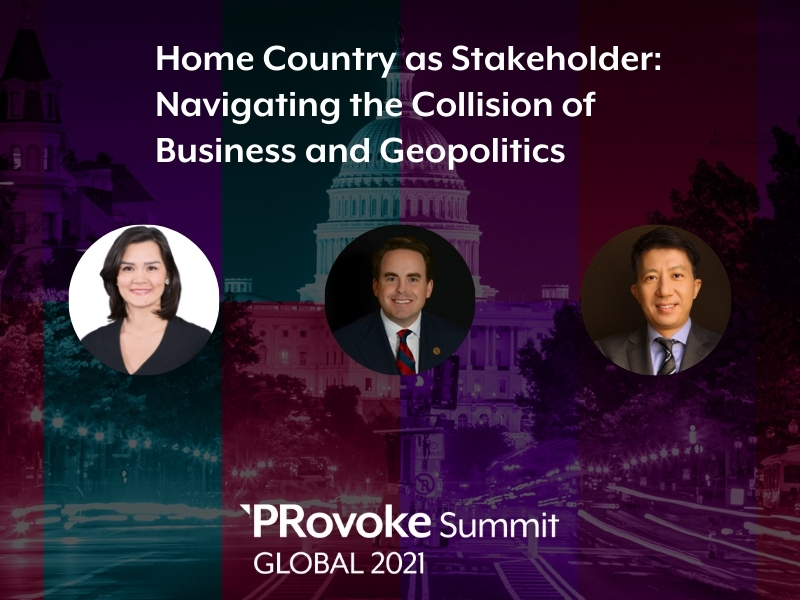 PRovokeGlobal: Why National Security Has Emerged As A Key Stakeholder Challenge

As the public takes an increasing interest in geopolitical issues, companies are finding that their home country is a new, and potentially unpredictable, stakeholder.

As the public takes an increasing interest in geopolitical issues, companies are finding that their home country is a new, and potentially unpredictable, stakeholder.

That was one of the key findings from a Weber Shandwick discussion at PRovokeGlobal today which examined the collision of business and geopolitics. Presenting agency research that polled more than 1,200 senior MNC executives, Weber Shandwick EVP Michelle Giuda pointed out that 58% say their home country is a critical stakeholder to their business, which is on par with customers and shareholders.

"This is very compelling in the rising conversation around stakeholder capitalism," said Giuda. "You don’t see a lot of senior leaders talking about prioritising national interests and how their business is going to ladder up to that yet, but it is top of mind."

Amid considerable geopolitical tension, exemplified by the current US-China relationship, Giuda added that national security is now being cited by respondents "as more important to their decision making than diversity and inclusion, human rights and climate change."

In nine of 12 markets surveyed, including  China, India, the UK and the USA, the home country is ranked as a top three stakeholder. That is only reinforced by seniority; CEOs and corporate presidents rate home country as the top stakeholder to their business.

All of which is underpinned by the finding that 47% of execs are feeling more vulnerable to geopolitical risks. An overwhelming majority — 87% — are feeling the pressure to prepare to speak out on geopolitical issues over the next five years.

"That presents great risks to their business," said Giuda. "Most executives are unprepared, and are more reactive than proactive, when it comes to geopolitical risks."

Unfortunately for them, public pressure is only rising, said Matthew Swift, CEO at Concordia, which promotes public-private partnerships. "Consumers are getting more informed and educated on geopolitical dynamics, and it is having an effect on consumer activity," he said. "We saw it 10 years ago around ethical supply chains, now we’re seeing it around which governments might present threats."

Complicating matters further, added Jay Wang, director of the USC Center on Public Diplomacy, is "a lack of clarity as regards the policy context for business operations and policy communications."

This is particularly evident, said Wang, when it comes to the biggest issues of our era. "Climate change and digital tech and its challenges are the most significant developments of the 21st century, but policy frameworks and structures have not caught up with the speed of change."

And while geopolitical risks are prominent today, neither should geopolitical opportunities be discounted. Wang noted that brands can play an important role when it comes to bringing people together. "In terms of consumer identity and employer identity, it’s ever more important to seek truths that transcend boundaries and build trust and goodwill between nations and peoples."