Please refer to our Privacy Policy for important information on the use of cookies. By continuing to use this website, you agree to this.
Home Latest Revealed: Failed Hong Kong Govt PR Plan To Salvage Global Reputation

Not a single PR agency could be persuaded to take on a global campaign aimed at addressing the Hong Kong government's "negative perceptions."

HONG KONG — The Hong Kong government has sought PR agency counsel for a campaign to salvage its global reputation as the city remains gripped by unrest. Following briefings, though, not a single global PR firm could be persuaded to bid for the wide-ranging proposal, the Holmes Report has learned.

The Holmes Report has obtained a copy of the brief (excerpted below), which calls for strategic communication advice to "address negative perceptions in key markets overseas to maintain confidence in Hong Kong" and to "underscore the strengths and attributes that differentiate Hong Kong from other cities in the region and bring out the success of 'one country, two systems'."

The ISD added that it has "no immediate plan to conduct [another] procurement exercise of a similar nature."

Yesterday, a Reuters' transcript of Hong Kong chief executive Carrie Lam's remarks to a group of businesspeople in late August revealed that eight global PR firms were approached, with four immediately turning the proposal down.

The Holmes Report has learned that at least three firms attended an in-person briefing with the ISD — including Brunswick, Ogilvy and Ruder Finn — but none ended up bidding for the contract, reflecting the PR industry's serious misgivings over the nature of the plan.

"If you want an absolutely living, breathing example of why they've got problems, it's to put out a multifaceted RFP while the streets are on fire," said one agency source invited to take part. "It was completely misjudged."

Ogilvy Hong Kong MD Clara Shek confirmed the agency had taken part in the briefing but did not proceed because of the tight "turnaround time". The RFP called for proposals to be submitted one week after the briefing.

Representatives from Ruder Finn and Brunswick did not respond to requests for comment as this story went live.

The PR plan points to the toll that widespread protests have taken on Hong Kong's global reputation. "Protests in Hong Kong have attracted widespread international attention over the past two months."

"Governance in Hong Kong, and the implementation of “one country, two systems” has come under the spotlight," continues the brief, which was issued in mid-August. "This has also raised concerns about Hong Kong’s positioning as a global business and financial hub with a stable environment underpinned by the rule of law. A more acute concern is the affect [sic] the protests may have on perceptions about personal safety for business travellers, trade shows/exhibitions and tourists. Protesters have signalled an ongoing campaign, with plans changing often in response to new developments."

The assignment aims to target such audiences as "business persons, investors, entrepreneurs, politicians and high-income leisure and business travelers" from a range of key markets in Asia-Pacific, Europe and North America. It called for "an initial assessment of Hong Kong’s image overseas following the 'extradition bill' and subsequent protests/conflicts," along with a "proposed PR strategy to achieve the objectives."

Carrie Lam's government has come in for sustained criticism over its response to the protestors, highlighted by such media gaffes as visiting broken MTR turnstiles while refusing to acknowledge the injuries suffered by protestors.

The unrest has raised questions about HK's brand positioning as 'Asia's World City'. A recent government ad attempted to reassure overseas investors of the city's stability and economic strength.

By contrast, the protestors have utilised technology and visual content to build a vibrant, grassroots movement. "Basically this is a political problem not a PR problem," said another agency source. "But Hong Kong will need a huge reputation reboot at some point." 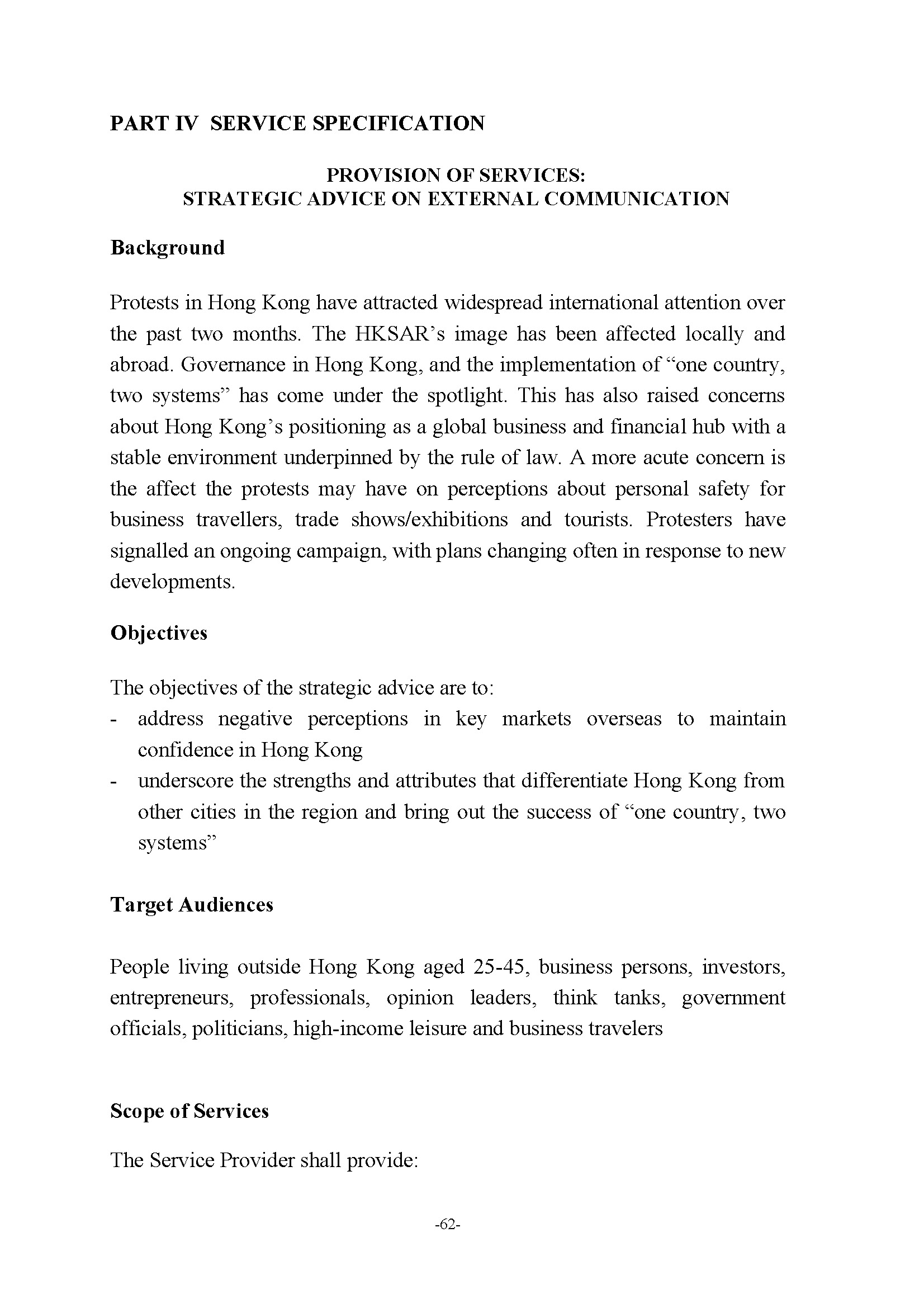 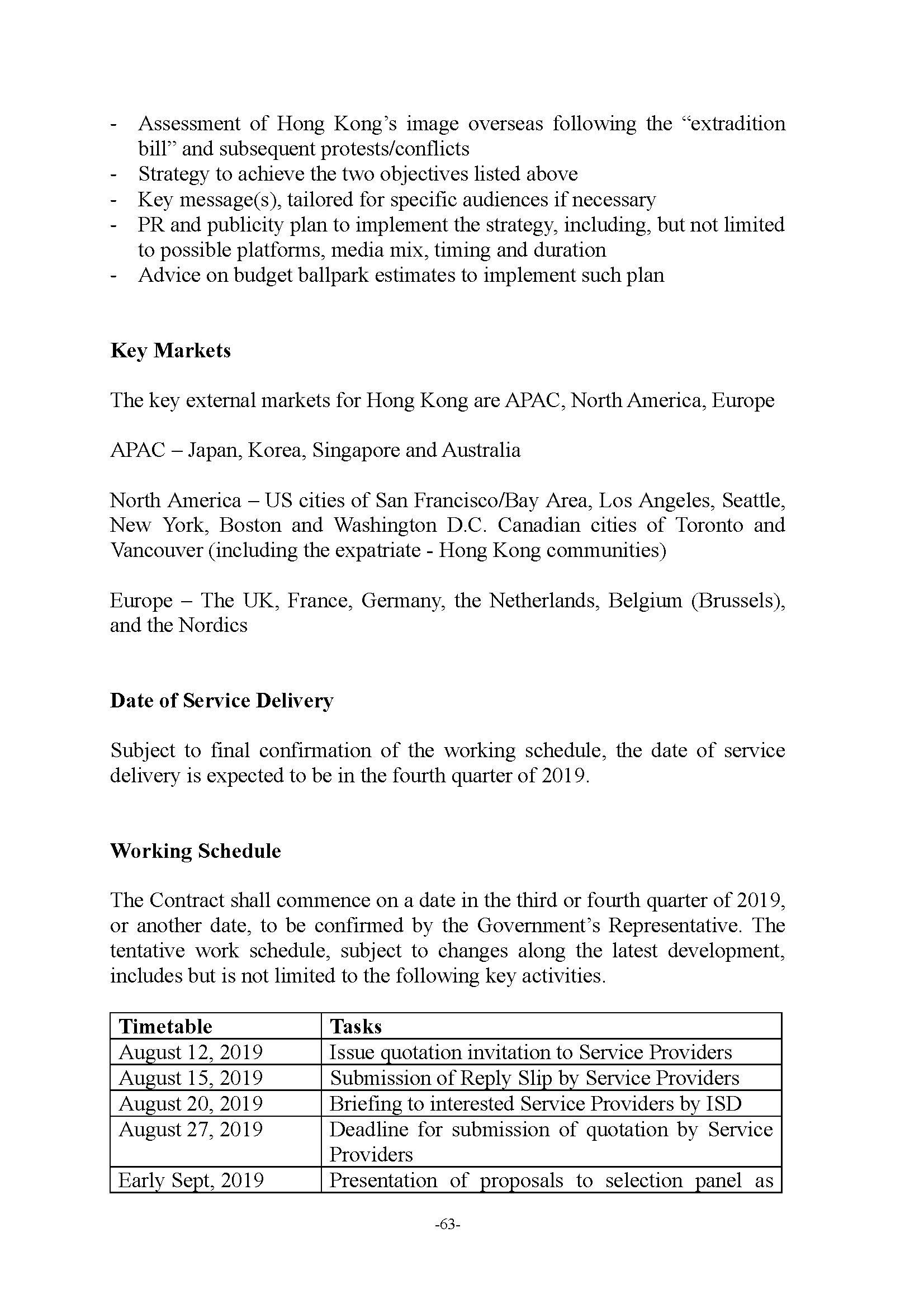