Please refer to our Privacy Policy for important information on the use of cookies. By continuing to use this website, you agree to this.
Home Latest Study: PR Sector Needs To Do More To Tackle Climate Misinformation 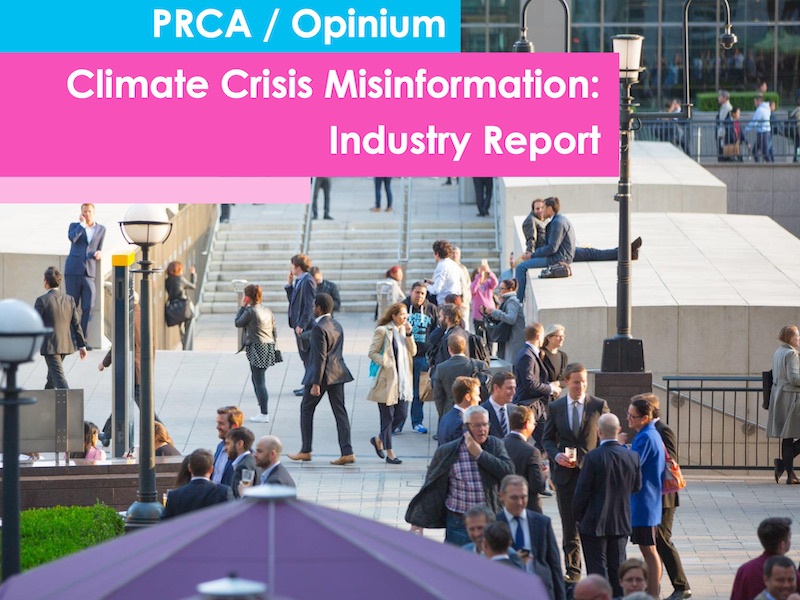 LONDON — The PR industry is ready to tackle misinformation around the climate crisis, but is nervous about expertise, bandwagoning and greenwashing, according to a new study.

The first research report from the PRCA’s new Misinformation in the Climate Crisis Strategy Group explored perceptions of the climate crisis and misinformation, the role of communications professionals within it and the challenges that need to be addressed.

The Opinium research – which surveyed 180 UK communications professionals between February and March – found that more than 75% of PR professionals feel more needs to be done by the industry to tackle misinformation.

More than 80% of those surveyed are already playing an active role in advising the organisations they work for on how to navigate the climate crisis debate and 71% of respondents agreed they are giving advice on the climate crisis more frequently than five years ago.

However, 60% believe clients are too eager to jump on a bandwagon talking about the climate crisis but often don’t take meaningful action. In addition, nervousness around entering the debate was felt by a fifth of the respondents (18%) with nearly two fifths (39%) highlighting the feeling of the organisations they work for needing to be an ‘expert’ before being able to contribute to the debate.

In a parallel study of 2,000 nationally representative UK adults, also conducted by Opinium, 47% of social media users admitted to consuming social media news content about the climate crisis that was either made up or exaggerated in the past month; this equates to 21.8 million UK adults. When asked to describe what misinformation is from a list, only 45% were able to accurately define it.

John Brown, CEO and founder of B-Corp agency Don’t Cry Wolf, is the chair of the group. He told PRovoke Media: “This is about people sharing content or creating campaigns and not being aware that they are not as informed as they should be, in the breathless race to create another ‘net zero’ commitment.

“It’s clear that as professionals we are being asked to consult on how to get involved in the climate crisis debate like never before, and we need to level up that understanding and knowledge so we can be a credible authority and advise clients on how to enter the debate. There is also frustration in the industry getting involved with bandwagoning and the growing trend of ‘eco-consumering’ – there are some dicey claims being made, and bamboo coffee cups are not going to save the world.”

Brown said the aim of the group was do “give people doing good work the confidence to tell stories that aren’t necessarily the sexy ones, and also to help those on the brink of putting together a campaign when they are not quite sure whether it lives up to these claims, a reason to pause, reflect and see if they need to do more to make it more robust.”

The group is now gathering content, case studies and ideas from anyone in the industry who feels they have made positive steps forward in helping to eradicate misinformation from communications around the climate crisis, with a view to curating a bank of information and inspiration and producing best practice guides, including a glossary of what relevant terms actually mean.

The strategy group is also aiming to have a presence at COP26 in Glasgow this November.