Please refer to our Privacy Policy for important information on the use of cookies. By continuing to use this website, you agree to this.
Home Latest The Age Of Rage: Why There Are More Risks To Corporate Reputation Than Ever 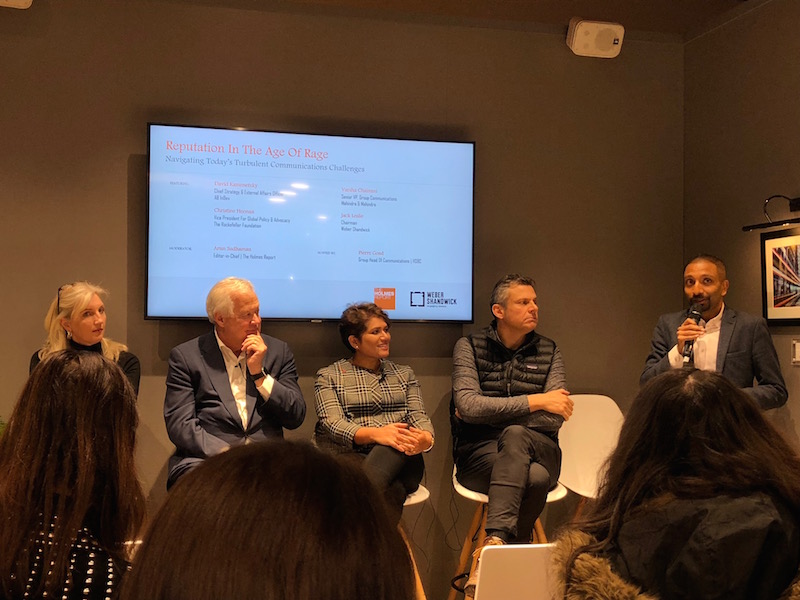 The Age Of Rage: Why There Are More Risks To Corporate Reputation Than Ever

Communications leaders at Davos say CEOs are under huge pressure to evolve purposeful brands and take a stand on social issues.

DAVOS — In the “age of rage”, the risks to corporate reputation are only increasing, according to communications leaders attending the World Economic Forum in Davos this week.

Speaking at a Weber Shandwick/Holmes Report panel discussion on “Reputation In The Age Of Rage”, Christine Heenan, VP for global policy and advocacy at the Rockefeller Foundation, said gaps between rhetoric and reality were a huge risk for companies and organisations.

“Part of this ‘age of rage’ has to do with distrust,” she said. “Hypocrisy sells and we are all so ready to look for and believe hypocrisy to confirm our distrust. If you’re talking about the importance of the environment while the CEO drives a gas-guzzling Humvee, or if you’re a publication reporting on sexual harassment and a reporter has treated female colleagues inappropriately, that’s corrosive. Living your values and being as airtight as possible becomes important.”

Heenan said digital and social media had ramped up the risks to reputation: “We’re living in an era where there is a tension between speed and accuracy when trying to figure out what to say in a crisis. Social channels allow a wrong phrase or word to go from match to forest fire and the use of language from legal counsel as opposed to authentic regret can lead to even greater problems.”

Weber Shandwick chairman Jack Leslie said the communications industry had to take some responsibility for the “age of rage”: “We are both the cause and consequence of a lot of this. We are part of the race to get engagement and ratings, and the conflict between speed and accuracy, and we have to look at how we as an industry are perpetuating this.

"In political campaigning we used to have three simple, unwritten rules: it had to be true, it had to be credible, and it had to be relevant. What’s disturbing in the post-truth era is that so many of those standards have been thrown out.”

He added: “The targeting we can do now, alongside the rise of populism, and knowing how the media can hit those hot buttons, means we’re a big part of the problem and we need to say that the industry’s behaviour is not helping to build trust, it’s feeding the beast."

The session, hosted by HSBC group communications Pierre Goad and moderated by Holmes Report editor-in-chief and CEO Arun Sudhaman, looked at a range of challenges to corporate reputation, including pressure on CEOs – from inside and outside the business – to evolve into purposeful brands and take a stand on social issues.

Weber Shandwick’s most recent CEO Activism research found that two-thirds of marketing and PR professionals see a positive impact on reputation when CEOs take a stand on societal issues, but only a quarter think CEOs are ready to respond when they are under pressure to speak out.

Leslie said: “Some issues, as a CEO, you can’t avoid. Look at Merck’s response to Charlottesville: it wasn’t something scripted but it felt deeply appropriate and authentic, as did Tim Cook at Apple when he felt he had to take a position on immigration.”

He said a “gut check” was still the most important factor in deciding whether to take a stand: “No matter how strategic it is, if the CEO is not personally comfortable taking this position, I would be very worried, because that will translate as they get into the issue.”

Varsha Chainani, SVP of group communications at Indian multinational Mahindra & Mahindra, said CEOs “have to be smart in making a decision on what social issues you want to stand for,” and Heenan agreed that CEOs needed to be choosy about what they were vocal about: “If you speak out on anything and everything, the value of your voice becomes diminished.”

The pressure on CEOs to be vocal on social issues is closely linked to the rise in purpose-driven brands, said Leslie: “We’re all talking about social purpose and most of our clients want to come up with a strategy and ensure their messaging is truly authentic. That pressure is internal as much as external, and needs to be grounded in the company’s values. I get concerned about clients when it’s not, because it gets called out first by employees and then by customers and other stakeholders.”

And he added: “It’s moved from strategic philanthropy to something more like shared value. Whatever you adopt as your purpose has to be core to the business – how you apply your unique skills as a company to social issues. That takes thoughtful analysis and a real programme that requires time and money.”

David Kamenetzky, chief strategy and external affairs officer at global drinks business AB Inbev agreed that social purpose had to be grounded in the values of the business, and this in turn gave brands “permission to speak out” on certain subjects: “Look at our Budweiser Superbowl activation: we’re one of the largest procurers of renewable energy and it’s a beer brewed 100% sustainably with wind energy, so that’s the ad. We’ve done polling and both Republican and Democrat consumers find it highly engaging and want the brand to speak about sustainability.”

But regardless of a brand’s stated purpose or the stand a CEO takes, Kamenetzky said the biggest problem for any company was lack of trust in the leadership: “Employees are usually the first to detect a problem, and it’s truly a cancer for a company when its own employees lose trust in the accuracy of what you’re saying.

“Hubris and arrogance are also big risks for companies today. When you take things for granted and start to think your judgement is impeccable, mistakes can happen. When companies get into trouble, the root cause is probably a momentary loss of the ability to listen, and thinking you have all the answers.”

And Chainani concluded: “The reality is there is no place to hide now. Issues and crises can come to you from across the world, from customers to the geopolitical environment. It’s about readiness, agility and reacting quickly enough so you are seen as a transparent company that is ready to take on whatever comes your way, instantly.”