Please refer to our Privacy Policy for important information on the use of cookies. By continuing to use this website, you agree to this.
Home Latest "They Think We Are Out Of Touch": Davos Confronts Populist Backlash 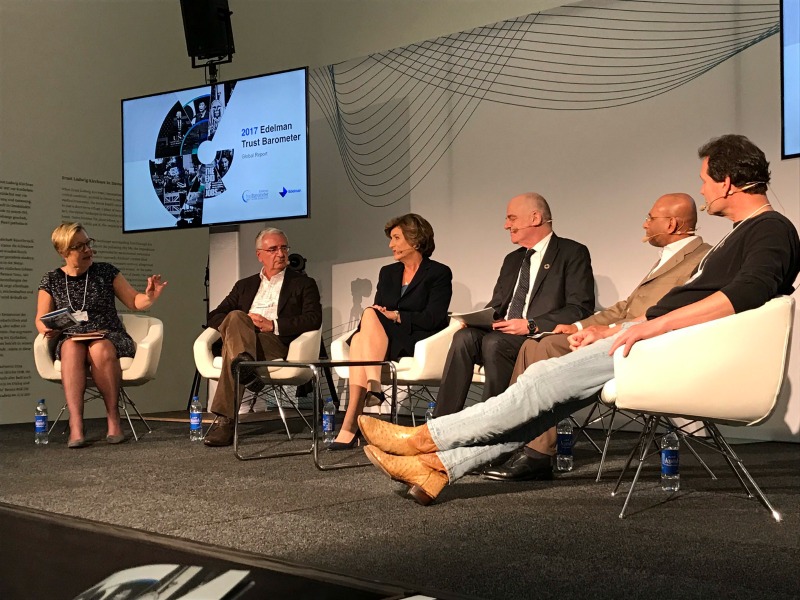 "They Think We Are Out Of Touch": Davos Confronts Populist Backlash

Richard Edelman urges business leaders to be a force of good amid populist backlash and loss of faith in traditional sources of authority.

DAVOS — Business leaders must not shy away from tackling rising populism and a loss of faith in the system if they are to restore credibility in their companies, heard delegates at the World Economic Forum today in Davos.

An animated discussion underpinned Edelman's annual Trust Barometer event, highlighted by Richard Edelman's stark admonition that business is widely perceived as being out of touch with the hopes and fears of normal people.

"This is urgent," said Edelman. "We have to get back to a world where we are believed and trusted."

"People are disappointed in you — they looked to you to lead and you didn’t," Edelman told  a room full of business leaders. "You can’t just focus on the numbers. They think we are out of touch. Based on experience, they are correct."

Edelman cited the implosion of trust revealed by this year's study, noting that  more than half of the people surveyed believe that today's economic system is deeply unfair. "Most important of all, they want change," he said. "And they’ve proven it with Brexit and Trump."

Traditionally, added Edelman, "business resembles a tortoise" in these moments, opting to "duck and cover". That approach, he believes, is simply not an option anymore, given the weight of opposition to globalisation and rapid technological innovation. A reliance on delivering economic benefit and great products is not enough, he argued.

"We’ve got to not just obey the classic framework of governance," said Edelman, pointing out "business needs to step into the void" created by plummeting trust across government, media and NGOs. "Establish a credible narrative on trade and security. Go out and make the case on supply chains. Don’t wait for government to do that."

Edelman pointed to a sizeable proportion of respondents who are undecided about whether the world is working for them. "Business is the last retaining wall for that key group of undecideds," he said. "You want to innovate, have a global supply chain, run your business? This is important."

The best way to make the business case, he continued, no longer resides in the CEO alone, but in employees — the kind of peer-to-peer approach that is much more trusted than top-down communication. The implications for 'Davos man' are hard to miss.

"We’ve got to get the undecideds back to feeling that business is a force for good," said Edelman. "Employees are the most credible source of information. It’s p2p, not top-down. The big thing of Davos man is control — that’s over."

Or, as Financial Times US managing editor Gillian Tett put it, "we are all bankers now", given the widespread decline in trust across all institutions. The question is whether business has it what it takes to move beyond the Davos feedback loop and actively address a world where fake news travels faster than the truth.

PayPal CEO Dan Schulman argued that leadership is more critical than ever, particularly when it comes to asserting the beliefs that companies must act on. "Businesses have a moral obligation to be a force for good," he said. "We have huge amounts of money and we attract some of the very best talent. Your mission should encompass the issues that matter to citizens across the world."

Schulman admitted that that this stance can be "very uncomfortable", citing PayPal's opposition to the HB2 law in North Carolina, which saw the company halt expansion plans in the state.

"I felt like we had to do that because it was inconsistent with our mission," he said. "I got death threats. It was lonely for a while. But it said to our company and customers that we act on the beliefs we have."

Even Schulman, though, was not about to respond affirmatively to Tett's query on whether PayPal would take a stand against Donald Trump. "No, I’m taking a stand for what I believe in," he said. "Democratising financial services. We should not be shrinking into our offices. This is a time for leadership."

If actually acting on your corporate values is uncomfortable, so is the transparency it requires, added Campbell Soup CEO Denise Morrison. But INSEAD professor of strategy and management Subi Rangan struck a more hopeful note, noting that discussions of a company's responsibility beyond shareholder value would have been dismissed a decade ago.

"I do believe people are getting the point loud and clear," said Rangan, adding that business schools had focused too much on competence rather than character. "Leaders have power. How that power is exercised is where trust lies. If that power is not exercised in adherence with proper expectations, then that trust is lost."

But the idea that people are being left behind should not comes as anything new to business. The only difference now, said UN special adviser David Nabarro, is that social media has enabled those people to become "much more noisy."

"Emotions being felt by people who are left behind are becoming much more visible and widely shared," said Nabarro. "If we’re going to do something about it, it means engaging in those issues — that’s the only way any of us can earn trust. The leaders that earn trust are the ones that really benefit the people that are being left behind."

Amplifying this loss of faith is the steady drumbeat of fake news, which has proved instrumental in reinforcing fears about economic liberalisation and innovation. The traditional media, once seen as a bulwark against propaganda, now confronts a reality when it is barely more trusted than the institutions it is supposed to hold accountable.

For all institutions, the ability to communicate with empathy is crucial, the panel agreed. But that might be easier said than done, particularly when there are some significant global interests who benefit from a climate of fear.

"If we want to engage with communities on an emotional level then of course empathy is important," said Nabarro. "But that doesn’t mean barraging people with facts. Trust is about finding interpreters who we depend on to explain what’s going on."

"If you accept my hypothesis that emotions are now a much more valuable currency in international affairs, then there will be an increase in groups that want us to experience fear," continued Nabarro. "There are possibly quite a lot of interests in the world that gain by encouraging a greater degree of fear at this point of time."

Engaging with a hostile world, as Tett put it, might be the only option left for business leaders.