Please refer to our Privacy Policy for important information on the use of cookies. By continuing to use this website, you agree to this.
Home Latest Trust Barometer: Special Report Shows People Are Choosing Jobs Based On Beliefs 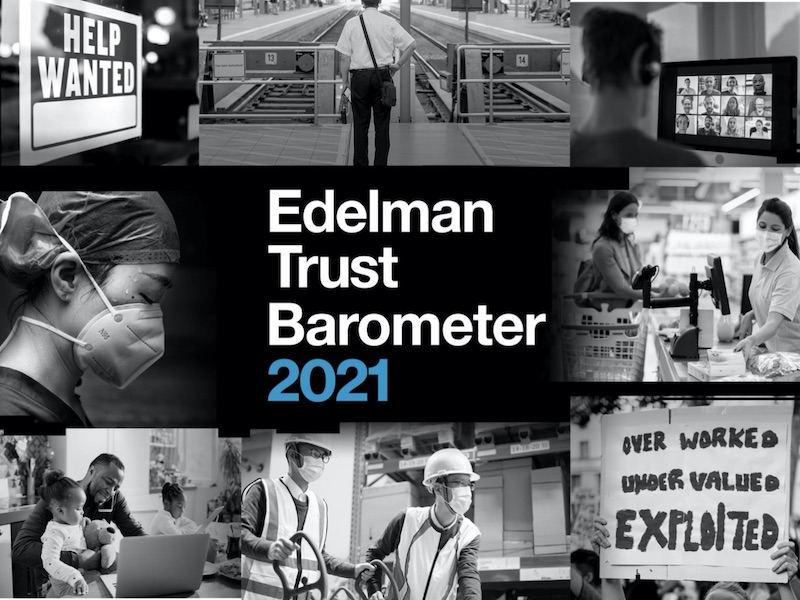 NEW YORK — The latest Edelman Trust Barometer study has found that, for the first time, most employees (61%) are now choosing what jobs they take based on personal beliefs, with the figure rising to 67% of those aged 18-34.

In May, the Trust Barometer found that ‘my employer’ (77%) was the most trusted institution, that employees looked to their employer as the most trustworthy source of information (54%), and that employees, for the first time, were the most important stakeholder to a company achieving long-term success.

Against that backdrop, Edelman’s newest special report, 'The Belief-Driven Employee', finds that the pandemic has changed values, so higher wages are no longer sufficient incentive to work longer and harder, and the bar for employers has been raised so that personal empowerment and social impact are equivalent to career advancement and salary raises.

The Trust Barometer study – which was fielded in mid-August, with a survey of 7,000 employees across Brazil, China, Germany, India, Japan, UK and the US – found that “the employee is for the first time as belief driven as the consumer in selecting or staying with a company. The employee is also demanding a voice in corporate strategy.” The report concludes that “the privileged position of My Employer as the most trusted institution demands that the CEO deliver on the issues of the day, from sustainability to re-training to diversity and inclusion.”

In his essay accompanying the launch of the latest report, Richard Edelman said: “The Employee Value Proposition (EVP) now looks like a tripod, balanced on the traditional enticements of pay and career advancement, a newer focus on employee well-being, with flexible hours and remote work, and now an employer commitment to act for good on society’s biggest challenges. Employers must stand up every leg of this tripod if they want to win and retain the activated employee. ”

A key takeaway was that businesses must act on their values: 67% of those surveyed expect an organization to act on its values, yet only 58% say their company is meeting this expectation. And while 67% expect their employer to stop certain business practices if employees objected, only 41% say their company would do so.

In particular, DE&I and ESG commitments must be addressed: 75% expect there to be diversity at all levels of an organization, but just 32% of respondents say their employers are meeting that expectation, while 62% say they’d take a job offer from an organization that was socially responsible and conscientious about its environmental impact.

The reward outweighs the risk for those businesses that do take a stand: respondents said they were far more likely than not to work for a company or organisation that publicly supports and demonstrates a commitment to issues including: healthcare access (9.5x); human rights (9.5x); economic inequality (8.0x); gender equality (8.0x); climate change (8.0x); Covid vaccination (7.0x); and racism (7.0x).

Edelman said there was “a substantial warning signal” in the report, namely “the growing gap between expectations and delivery on commitments. More than two-thirds of employees expect companies to act on their values and say it’s a dealbreaker in taking a job if they don’t; yet less than half give employers high marks in living up to this promise. Even as concerns about pandemic-related job loss have decreased, more than three-quarters of respondents are worried about losing their jobs to factors ranging from the gig economy and a looming recession to automation and artificial intelligence.”

In addition, 71% of respondents want to do meaningful work that impacts and shapes society, and belief-driven employees are more likely to recommend their employer’s products and services (79%) and the organization as an employer to others (76%). This mirrors Edelman’s special report on consumer trust in June this year, which confirmed that consumers were more likely to advocate for brands that contribute to the greater good.

The report also confirms the “great resignation”: 20% of those surveyed have left their job in the last six months or plan to do so in the next six months – rising to 41% in the US – and less than one-third of them did so in pursuit of better compensation.

Of those leaving their jobs, most (59%) said they want one that better fits with their values, while 47% want jobs that better align with their lifestyle; only 31% are seeking better pay or advancement. And 34% left their job primarily because it remained silent on a societal or political issue that ‘I believed it had an obligation to publicly address’.

Edelman concluded: “We need a new employee-employer compact. First, employees need to be recognized as the most important stakeholder. Second, they must have a voice, both in corporate strategy and in the ability to speak publicly over social or other channels. Third, the employer is required to deliver tangible action on issues, such as health care, the environment and DEI. Fourth, business must train people to be ready for the jobs of the future. Fifth, CEOs must embody their company values and speak publicly about issues that matter. The employees are no longer the supporting cast; they are essential partners in the future of business.”